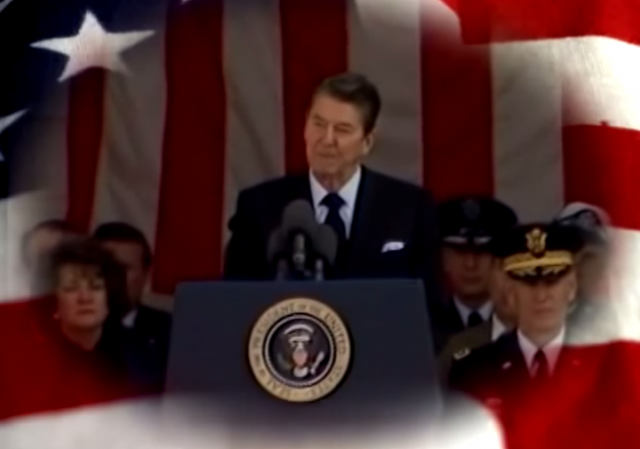 Every year I share this speech from President Reagan. I struggle to find another one available that honors those who’ve served our great nation any better.

In 1985, President Reagan gave his Veteran’s Day Address at Arlington National Cemetery. With the Cold War a fresh threat, Reagan emphasized the importance of peace while insisting, “strength is a declaration that cannot be misunderstood. Strength is a condition that declares actions have consequences. Strength is a prudent warning to the belligerent that aggression need not go unanswered.”

There is never enough we can do for our veterans who willingly sacrifice so much. Their selflessness was not neglected by Reagan who told this story:

Sometime back I received in the name of our country the bodies of four marines who had died while on active duty. I said then that there is a special sadness that accompanies the death of a serviceman, for we’re never quite good enough to them-not really; we can’t be, because what they gave us is beyond our powers to repay. And so, when a serviceman dies, it’s a tear in the fabric, a break in the whole, and all we can do is remember.

This Veteran’s Day, we humbly offer our utmost gratitude to all who have fought to preserve the greatest country man has ever devised. While words hardly seem sufficient, we can offer this: we remember.

A few moments ago I placed a wreath at the Tomb of the Unknown Soldier, and as I stepped back and stood during the moment of silence that followed, I said a small prayer. And it occurred to me that each of my predecessors has had a similar moment, and I wondered if our prayers weren’t very much the same, if not identical.

We celebrate Veterans Day on the anniversary of the armistice that ended World War I, the armistice that began on the 11th hour of the 11th day of the 11th month. And I wonder, in fact, if all Americans’ prayers aren’t the same as those I mentioned a moment ago. The timing of this holiday is quite deliberate in terms of historical fact but somehow it always seems quite fitting to me that this day comes deep in autumn when the colors are muted and the days seem to invite contemplation.

We are gathered at the National Cemetery, which provides a final resting place for the heroes who have defended our country since the Civil War. This amphitheater, this place for speeches, is more central to this cemetery than it first might seem apparent, for all we can ever do for our heroes is remember them and remember what they did — and memories are transmitted through words.

Sometime back I received in the name of our country the bodies of four marines who had died while on active duty. I said then that there is a special sadness that accompanies the death of a serviceman, for we’re never quite good enough to them-not really; we can’t be, because what they gave us is beyond our powers to repay. And so, when a serviceman dies, it’s a tear in the fabric, a break in the whole, and all we can do is remember.

It is, in a way, an odd thing to honor those who died in defense of our country, in defense of us, in wars far away. The imagination plays a trick. We see these soldiers in our mind as old and wise. We see them as something like the Founding Fathers, grave and gray haired. But most of them were boys when they died, and they gave up two lives — the one they were living and the one they would have lived. When they died, they gave up their chance to be husbands and fathers and grandfathers. They gave up their chance to be revered old men. They gave up everything for our country, for us. And all we can do is remember.

And the living have a responsibility to remember the conditions that led to the wars in which our heroes died. Perhaps we can start by remembering this: that all of those who died for us and our country were, in one way or another, victims of a peace process that failed; victims of a decision to forget certain things; to forget, for instance, that the surest way to keep a peace going is to stay strong. Weakness, after all, is a temptation — it tempts the pugnacious to assert themselves — but strength is a declaration that cannot be misunderstood. Strength is a condition that declares actions have consequences. Strength is a prudent warning to the belligerent that aggression need not go unanswered.

We endanger the peace and confuse all issues when we obscure the truth; when we refuse to name an act for what it is; when we refuse to see the obvious and seek safety in Almighty. Peace is only maintained and won by those who have clear eyes and brave minds.

Each new day carries within it the potential for breakthroughs, for progress. Each new day bursts with possibilities. And so, hope is realistic and despair a pointless little sin. And peace fails when we forget to pray to the source of all peace and life and happiness. I think sometimes of General Matthew Ridgeway, who, the night before D-day, tossed sleepless on his cot and talked to the Lord and listened for the promise that God made to Joshua: “I will not fail thee, nor forsake thee.”

We’re surrounded today by the dead of our wars. We owe them a debt we can never repay. All we can do is remember them and what they did and why they had to be brave for us. All we can do is try to see that other young men never have to join them. Today, as never before, we must pledge to remember the things that will continue the peace. Today, as never before, we must pray for God’s help in broadening and deepening the peace we enjoy. Let us pray for freedom and justice and a more stable world. And let us make a compact today with the dead, a promise in the words for which General Ridgeway listened, “I will not fail thee, nor forsake thee.”

In memory of those who gave the last full measure of devotion, may our efforts to achieve lasting peace gain strength.

Thank you. God bless you all, and God bless America.

“We stain our souls with blood, so that you have the luxury of taking Liberty for granted. Please don’t.” – SGT B Wood, 3D LAR BN, USMC

I am tired of being told I am a racist and there is no hope for me from people like Van Jones. They want me to hear them, but they don’t want to hear me.

They don’t see their very own “elitist microaggression” as being wrong and unhealthy.

Best wishes to all my fellow veterans.

I didn’t make a career of the military, but the 2 years of active duty was one hell of a ride and the best thing for me. Thanks Navy/Marines (both who just had birthdays of 241 years)! Proud to serve, proud to have fought for the freedom of the South Vietnamese. I leave you with words to live by:

The United States Navy has two mottos, one official and one unofficial, with the former being “Semper Fortis,” and the latter “Non Sibi Sed Patriae.” The first means “ever strong,” the second “not for self but for country.” I add the Marines motto: Semper Fi, ever faithful.

In the spirit of inter-service rivalry, for it would be blasphemy for me to utter the words, I urge fellow Army, Air Force and Coast Guard veterans to add their mottos to this post. 🙂

This is odd. Ronald Reagan speech praising vets on Veterans Day. And the room is pretty much empty. Hmmmm.

Thanks for the effort Kemberlee. Try it over at AceOfSpades. I think you’ll get a better response.