No ticket to ride 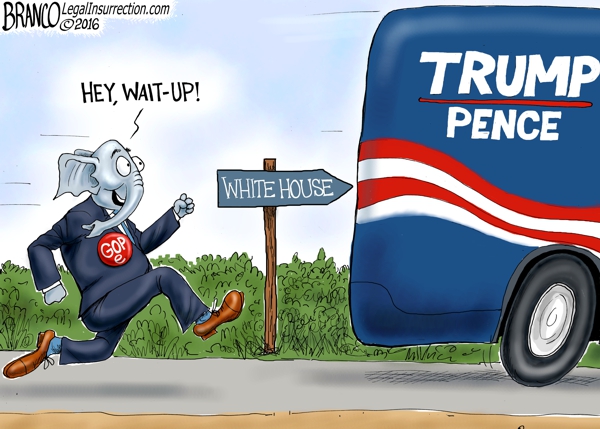 Note: You may reprint this cartoon provided you link back to this source.
For more A.F.Branco cartoons at Legal Insurrection click here.

Great… but do I see something orange under the wheel? Nope, just wishful thinking..

You should have found some way to include Paul Ryan in the dreawing the brownnosing weasel.

There’s a whole bunch of azz kissers trailing along now and most of ’em are not worth the sweat off of my brow..

A lot of the GOP came on board the Trump bus eventually.

Even Somebody like Paul Ryan, with his weakest possible endorsement, helped deliver Wisconson for Trump. In return he should get whatever he wants (Paul Ryan’s district went 62% for Trump, falling only from 66% for Romney). Wisconson sealed the election for Trump, saving the country from Michigan recount hell.

But Glenn Beck, National Review, Bill Kristol, John Kasich, & George Will, they should be disavowed. And all of the ‘conservative’ anti Trumpers on TV ought to be ignored.

I may get trashed for this, but let me just say that if the GOP establishment takes this whole election cycle as a learning experience and profits from it accordingly, I will be very happy for them to hop on board the bus. If they try to slow down the bus or change its direction, then we can see that they have learned nothing and need to be replaced.

A big test will be Trump’s first SCOTUS nomination. Assuming it is a good, sound conservative, will the GOP Senate go nuclear and approve the nomination in spite of universal Dem opposition? The Dems are on the record as saying they would go that route if Clinton were elected and they held the Senate. We need to do likewise.

Right now, under Trump, we are a coalition. We have pure Trumpers, reluctant Trumpers, and hopefully some never Trumpers will come around. But if the Trump administration is going to be a success, we are going to need to hold this coalition together and not start the purges before we even get to first base.

Ryan, McConnell and Prebus are underperformers, to say the least. Talentlessness aside, they have about as much collective backbone as a lox.

Look for McConnell to back off, using an excuse of not having 60 votes in the senate to overcome a democrat filibuster – after he reversed Reid’s elimination of the filibuster!

The adage of insanity being performance of the same thing wrong thing over and over, putting the future in the hands of the Three Stooges is insane, and a democrat wet dream.

Failure is an orphan, but Success has many fathers!

What does that imply about Success’s mama…?

And the GOPe are doing that too! Spot on again Branco! God bless.

A bus? Where’s the Trump Plane? Or… Trump Train?

Actually, they coalesced, eventually, finally. Now they can play a supporting role.

You ought to have posted this in yesterday’s article on LI’s thoughts on the election outcome.

The problem is that the elites of the Rep party and those in the Weekly Standard and others of that nature worked hand and glove to stop Trump. The voters of this country saw something in Trump that they liked more that the chosen and they spoke in the primaries. The elites did not want him and actually preferred Hillary with her corruption. To me that means that they need to join the Dems and stay out of the way. I can only hope that Trump will use his independent status to clean out the scum, both Dem and Rep. Many are now saying that the Clintons are done and should not be prosecuted, wrong, we need to set an example and get rid of all the corruption. If they let Hillary off, they need to pardon all the military guys who did less. For that matter, they need to review the murder charges against soldiers in combat areas and reverse those convictions.