Attacks keep people scared to even leave their homes for medical care. 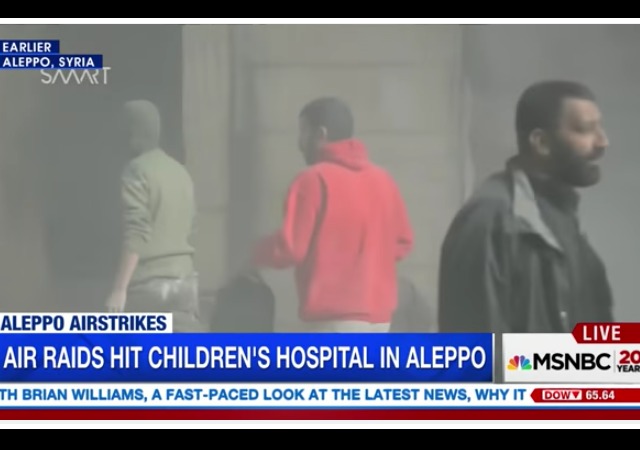 Aleppo has run out of hospitals due to constant bombardment from the Syrian regime and Russia backed by Hezbollah, which means over 300,000 people have no access to medical care:

Three hospitals in the opposition-held east were destroyed early Friday, forcing doctors and nurses to scramble between medical facilities to treat the wounded, often operating out of basements, which are safer from bombardments.

By late in the night, the four remaining hospitals in the area had also been bombed out of service, according to local doctors and the Aleppo Health Directorate.

“This destruction to the vital infrastructure has left the besieged and resilient people…without any medical facilities to provide treatment and a chance to save their lives,” according to a statement released by the directorate, which is based in the east. “And [it] has left them to die, which is what the regime is trying to achieve.”

Aleppo received a three-week ceasefire, but Bashar al-Assad’s regime and his Russian friends began bombing last Tuesday. Organizations tried to keep medical posts operating, but the constant attacks have scared people to even emerge from their homes to receive medical treatment:

One of those hit was a children’s hospital, forcing staff to evacuate babies to safety.

On Friday, a chlorine gas bomb hit Aleppo’s only pediatric hospital, “killing a mother and her two children and leaving other patients choking on the fumes.” Videos “show a nurse struggling to put an oxygen mask on a crying baby.” The attack forced the staff to shut down the hospital.

The Syrian Civil Defense group said an attack killed 61 civilians on Saturday. The bombardment “included 250 airstrikes and more than 2,000 artillery rounds.” From CNN:

Another man who seems to be a doctor says the hospital was bombarded, and there has been a direct hit on the intensive care unit, which he says was full of patients, “(especially) those who were transferred from hospitals that have been struck today morning and yesterday evening.”

He says staff have had to transfer patients to other hospitals when they don’t even know if they are operational, adding “the material damage is so huge in the hospital, unbelievable horror among patients and the medical staff, the ambulances outside can’t rescue patients, people can’t rescue each other, people are afraid of coming to the hospitals.”

Russian officials have claimed they have not participated in these Aleppo airstrikes.

That nice Mr. Putin, who’s a “strong leader” we can depend on…

Has he crossed Obama’s red line yet?

Are we sure this isn’t disinformation. The muzzies are good at that, you know. Remember all the fake photos of Israelis bombing Palestinian hospitals which were spread by AP?

This is Obama’s legacy. It didn’t have to be this way.