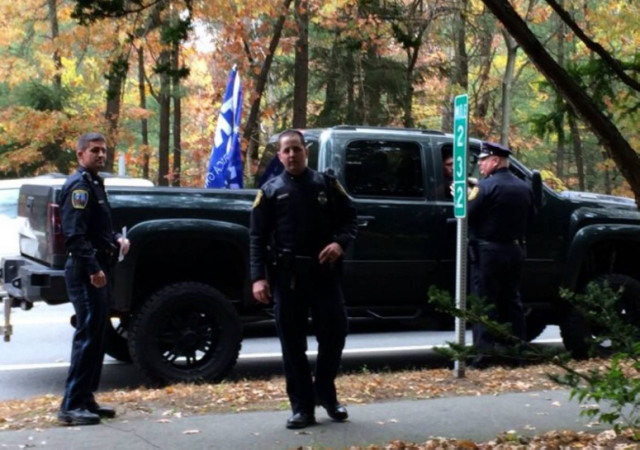 Two students from Babson College have been expelled from their fraternity for driving a truck with a Trump flag in the back through the campus of Wellesley College. Babson and Wellesley College are both located in Wellesley, MA. Hillary Clinton is also a Wellesley graduate.

The two men who drove through Wellesley College in a pickup truck Wednesday while waving a Donald Trump flag are students at nearby Babson College, and some witnesses felt their words and actions were “racially offensive and gender demeaning,” Babson officials said Thursday.

Officials at the two colleges, both located in Wellesley, did not offer specifics about what the men said or did when they entered the elite all-women campus.

Lawrence P. Ward, vice president of student affairs at Babson, said in a letter to students that the men drove by Wellesley College’s Harambee House, which serves as the focal point for African-American students.

“It is important to understand that our students’ behavior was experienced by many students of color and perceived by many others … as racially offensive and gender demeaning,’’ Ward wrote.

Are we supposed to believe that the students of Wellesley wouldn’t celebrate and maybe even enjoy a little gloating if Hillary had won?

The Swellesley Report has more:

We posted earlier this week about a couple of obnoxious Babson students who reportedly drove a pick-up truck around the Wellesley College campus the day after the election, waving a Trump flag, and were asked to leave the campus. A public Facebook post about the incident has been shared more than 5,000 times, and The Boston Globe has picked up the story as well.

Since the incident the students have been kicked out of their fraternity, Sigma Phi Epsilon. Sig Ep national says it considers the incident a blow to its aspirations for diversity and inclusion. The organization has, in fact, taken serious steps in the past when its membership has exhibited behavior that suggests an essential corruptness among the brotherhood. In 2014 the fraternity closed its Ole Miss chapter after someone placed a noose around a bronze statue of a black civil rights icon and left behind a flag with the symbol of the Confederacy (what is it with Sig Ep and flags?).

So waving a Trump flag is the equivalent of placing a noose on the statue of a civil rights leader?

Campus totalitarianism. There's no other word for it. https://t.co/2K11Otn54m

There has GOT to be a first amendment lawsuit there somewhere.

Who would want to be in a fraternity with a bunch of wimps anyway.

Nope. The Fraternity is a private organization that is not supported by the State or the Federal Government. The students are not subject to First Amendment protections from the Fraternity’s actions. That whole “Congress shall make no law” thingie (as expanded by the SCOTUS as to apply to the States).

There might be a contract lawsuit there, thought. If the conduct is not sufficiently well defined as to expulsion criteria, the students may be able to sue on a theory of offer, acceptance and legal detriment for joining the Fraternity.

If those are actual police officers in the photo (and not merely campus security guards), there’s you’re lawsuit. Last time I looked, exercising one’s rights under the First Amendment doesn’t provide probably cause for a stop, no matter how offended people may be.

A fraternity is a private association.

They are free to discriminate based on viewpoint.

And I don’t see a lot of detail on just *what* the two did and said, other than having the Trump flag.

The vast majority of mainstream greek orgs have completely sold out to become ‘officially sanctioned’ university orgs, usually to get waivers so that students can live off campus in frat houses rather than dorms, among other benefits.

The mainstream greek letter orgs would be better off becoming truly secret societies again, but many could not afford to keep the fancy houses.

Although it seems a shame i do think all fraternities on college campus should go back “underground” so thier membership can’t be pigeon-holed like this.

Or, they could just pull their ball-sacs out of thier manginas and be “men” again.

Political Correctness is a beginning step to control people’s thoughts.

Somehow burning an American flag is free speech, but no one is allowed to fly a Virginia Battle Flag.

Your freedom to fly a VA battle flag is exactly the same as your freedom to burn a USA flag: you can’t be arrested for it, or punished in any way by any government entity, but you can be shunned by people who disapprove, and expelled from private companies, institutions, or associations.

Nice words, but the reality is completely different.

What do you think the reaction would be if Trump said “I am. Uilding a Yuge beautiful building for African American studies and I will dedicate it to Harambee”?

Harambee is a Kenyan word. The house as probably named before the gorilla was born..

I have no doubt that if Hillary had won, and her supporters had done something similar, it would go unnoticed, much less punished.

But the guys should also take advice from football coaches around the world and act like they’ve won an election before.

As a candidate, Hillary Clinton tried to silence comics joking about her at the Laugh Factory nightclub in Los Angeles. Imagine what Fraulein Fu-kup would have done to them with the power of the presidency.

Clinton Goes after Laugh Factory Comedians for Making Fun of Her:
http://www.judicialwatch.org/blog/2015/11/clinton-goes-after-laugh-factory-comedians-for-making-fun-of-her/

These ‘riots’ are Obama/Jarrett/Soros’ final attempt at their dream of martial law.

Agreed. The Left believes it’s own narrative that all men and especially all conservative men are ALL ignorant, hateful, violent and generally with below-80 IQ points.

They really think we’re gonna fist-fight in the streets.

However, if our reaction does manifest it will be swift, bloody and final…for our opposition.

Just my opinion, of course.

There is this: “Officials at the two colleges, both located in Wellesley, did not offer specifics about what the men said or did when they entered the elite all-women campus.” It’s possible that they actually said or did something truly offensive, and that’s what they were expelled for.

But if the frat really has “aspirations for diversity and inclusion” then they should be proud to be expelled, and I wonder why they were there in the first place.

Now if they did everything the same, but then burned the Trump flag, they would be campus heroes.

And while burning the Trump flag, they could have thrown rocks through windows, smashed and burned other people’s cars and threatened to assault women and girls …. that would all be a form of “protected speech”.

“Harambee is a Kenyan tradition of community self-help event”…so says Wiki. they can name it that but if a white person suggested that the argument would be gorilla equals Black equals racism. Still a nice name and nice idea if one longs for the “old country” that they never knew and for a culture that if never soiled by the white man would not be as special as they dream. After all, not everyone living in Africa would be a prince or princess if Africa had never been colonialized.

The snowflakes will be going Bat *hit crazy. This stuff is just starting. They have had trigger warnings and safe spaces.
Trump was not going to win.
The poor little darlings have lost their way. Life is so harsh.

As a Sig Ep who still remembers college, I’m a tad embarrassed that some of my brothers were insensitive; it’s ungentlemanly and unbecoming. Having said that, if the fraternity were to expel members for giving other people the middle finger (what this was) or other acts of alleged stupidity, they would have zero members. Harmless stupidity, when caught by the right person in the right place at the right time and subjected to righteous public indignation, is still just harmless stupidity. Contrast this with what’s being perpetrated by the ant-Trump college crowd around the country, none of whom are in any way threatened with loss of membership in anything or so much as a slap on the wrist. On the contrary, they’ve been excused from classes and encouraged to have at it.

Furthermore, the irony (make that hypocrasy) of expelling members in the name of inclusion exposes a degree of intellectual blindness I didn’t think was possible, not to mention that having an opinion and ‘gloating’ about a political victory is now ‘essential corruptiveness’. A principal mission of fraternities is to help their members mature into responsible adults (no, it’s not to host the most killer parties, not that there’s anything wrong with that) and they could have used this event to do so. I love my frat but they should have done a better job of thinking this through.

Should be ‘hypocrisy,’ of course.

Those boys would be welcome at TAMU…!!!

“The two men who drove through Wellesley College in a pickup truck Wednesday while waving a Donald Trump flag are students at nearby Babson College, and some witnesses felt their words and actions were “racially offensive and gender demeaning,” Babson officials said Thursday.”

Well there you have it. Don’t like the political speech or political actions of your opponent? Then just cry like the little intellectual vacuous fascist that you are and claim the speech/action ‘offends’ you racially and if committed by a member of the other cis, then it’s gender demeaning as well.

The Trump supporters should all file grievances against the Clinton “Cry-Ins” and any of the anti-Trump signs/propaganda about him “not being my President.”

Alinsky Rule #4: “Make the enemy live up to its own book of rules.” If the rules state that someone merely needs to “feel offended,” then BE offended, and force the controlling body to fight FOR the Trump supporters. It’s all about using the rules to your advantage.

Wellesley… Isn’t that one of those places that is little more than a finishing school for the children of Good Families?