Ariel University: How a tiny Israeli city builds a high-tech bridge to India

Ariel University: How a tiny Israeli city builds a high-tech bridge to India 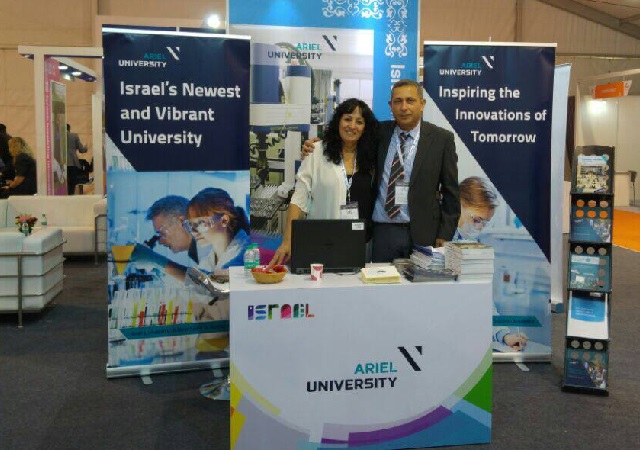 With Israel’s President Reuven Rivlin touring India on an 8-day visit, Ariel University is taking this historic opportunity to connect with Indian universities and tap into South Asian country’s huge talent pool. Professor Yehuda Danon, President of Ariel University, is accompanying the presidential delegation, along with fifteen other heads of Israeli universities. Along with student and faculty exchange programmes, Ariel University hopes to set up a joint research fund aimed at promoting research projects with India counterparts.

Ariel University, located in Samaria hills, is already home to many Indian research scholars, working mainly in industrial and technological fields. During my visit to Israel, earlier this year, I met few of the doctoral students from India and learned about the path-breaking work they were doing in collaboration with their Israeli teammates.

Froim Ditza, Head of Public Diplomacy at the Embassy of Israel, confirmed that more than twenty agreements were signed today between Israeli and Indian universities at an event attended by President Rivlin in New Delhi. “Israeli Academia is important for the country’s successful ecosystem of innovation. Universities are meeting point for ideas, research and industry,” Ditza said, emphasising the role of research and higher education in Israel.

President of Ariel University, Prof. Yehuda Danon, will be joining President Reuven Rivlin’s delegation to New Delhi. The purpose of the presidential delegation is to promote common binational academic, research and commercial interests. Prof. Danon was invited to take part in talks regarding academic and research cooperation.

Ariel University views it participation [in] the presidential delegation, as an important opportunity to promote significant relationships between the university and India’s system of higher education. The university expects collaborative research projects and student and faculty exchanges to result from the visit, as well as the establishment of a joint fund between Ariel University and India counterparts to encourage joint research projects. Currently the university is hosting numerous post-doctoral students that have come from India.

“India and Israel have many similarities and common interests and it is our hope that this trip will further our relationship while creating new and exciting joint research ventures,” stated Mr. Danny Hardon, Director of Research and Development at Ariel University.

University of Ariel with 15,000 students, one of the leading research universities in Israel today, has come a long way from its humble beginnings. In 1978, a small community of forty families founded the City of Ariel in the rocky and barren hills of Samaria. The city now has around 20,000 residents and 15,000 students, including around 600 students for the neighbouring Arab communities.

The story of Ariel is the story of Jewish revival in its rightful biblical homeland. Today, University of Ariel is not only a premier centre of research and learning for applied engineering and fundamental physics, it is also a unique place for reviving Jewish heritage and history. Researchers at Ariel University’s Wine Research Centre are using modern DNA techniques to recreate wines that have not been tasted since the days of King Solomon and Jesus Christ.

Bible describes how seafaring merchants under the reign of King Solomon traded with the nations of the East. Modern linguistic research points to India as the destination of many of these voyages. As Jewish centres of trade and learning once again reach out to India, history has somehow come full circle.

Watch: Find out about the path-breaking work being done at Ariel University’s Aerospace and Satellite Research Centre:

I’m fed up the liberal wining. Long live the Modis and Trumps of the world. Theirs is the way of the future.

Note that nobody in India seems to be having kittens over the fact that Ariel is in “occupied territory”. Here in the USA that would be a major issue. According to our State Department, a city of 35,000 people is somehow a “settlement”, and constant vigilance is needed to stop them referring to it as “illegal”, though they can’t cite any law against it.