That makes sense (if you are an idiot) 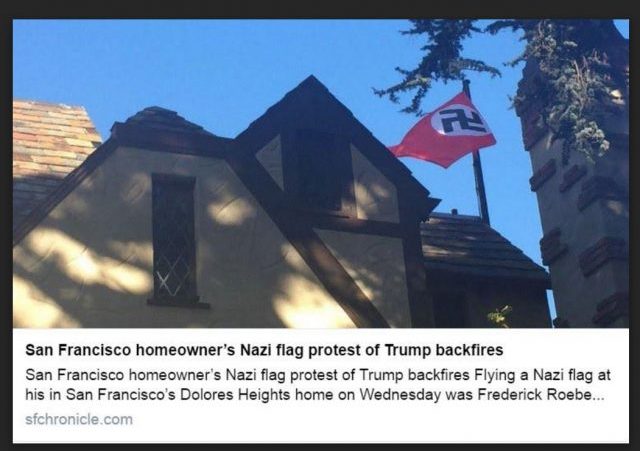 An unidentified San Francisco homeowner flew a Nazi flag over his house after Donald Trump was declared President-Elect, according to SFist, who received a tip about the flag.

The act of political commentary didn’t go over well with the neighbors.

In a video taken by SF Chronicle reporter Michael Bodley and posted on Twitter, the homeowner explained to a neighbor that it was a “comment on our new president elect.” He compared Trump to Il Duce, the Italian dictator Benito Mussolini, “but the Italians did not have as good of a flag.”

Flying a Nazi flag at his home in San Francisco’s Dolores Heights on Wednesday was Frederick Roeber’s attempt to make a social comment on President-elect Donald Trump.

But the 48-year-old quickly realized the display was misguided when neighbors spotted the ominous swastika and immediately confronted him in the street outside the house.

Roeber, who is retired and lives in the storybook-esq home on the corner of Sanchez and 21st streets, said he didn’t like Trump’s comments about Muslims and Mexican immigrants during the election.

Frederick Roeber, 48, briefly flew a Nazi flag above his San Francisco home in what he described as a protest against president-elect Donald Trump. But neighbors soon spotted the swastika and confronted him.

“I am hoping people get that this is a political statement, and that I’m not a Nazi supporter,” Roeber said outside his home’s wrought iron gates and manicured garden. “I’m a little afraid that neighbors will get the wrong idea.”

Story is from November 9th. Who owns a Nazi flag that they can fly the day after an election? I don’t think even Amazon’s same day service could deliver a flag that fast. The guy is a rich creep.

Right, they always say that. Right before they say that they were just following orders.

The genius misspelled “president”, too.

[As a point of interest for vexillology fans, that seems to be the Kriegsmarine jack of the 1935-45 era, which is slightly different from both the German national flag of the same period, and the NSDAP party flag of 1920-45. Three different flags, all inappropriate, even in California. And now, back to your regularly scheduled programming.]

Not just a Nazi flag, but a sailor flag to boot. Get a rope.

Why does a lefty even have a nazi flag?