Sullivan: Trump Fostering Fear ‘In Way that Only Fascists of ’30s’ Did 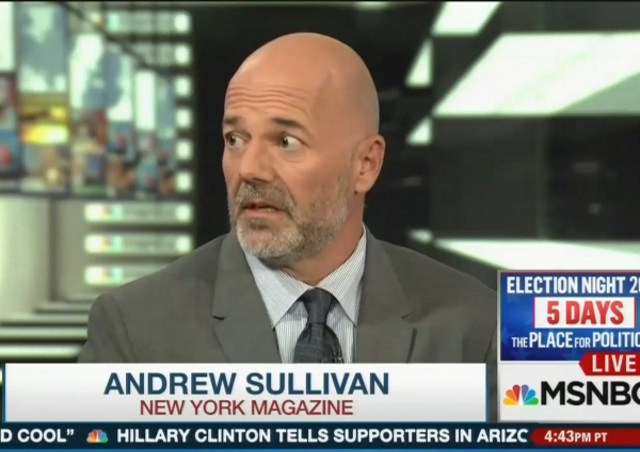 On yesterday evening’s Hardball, an overwrought Andrew Sullivan stopped just short of chewing the scenery, while repeatedly referring to Donald Trump and Ann Coulter as fascists. But precisely because of Trump’s supposed fascist fear-mongering, Sullivan predicted that “Trump is going to win this election.”

Former New Republic editor Sullivan claimed that we are in a “fascist moment” because white Americans are reacting to the country becoming majority-minority. Calling Ann Coulter “the other fascist” along with Trump, Sullivan cited Ann’s book “Adios, America” as epitomizing the fear of the foreigner driving Trump’s support.

Sullivan also cited fear of Islam as another “critical factor” driving Trump’s support. Sullivan accused Trump of exploiting that fear “in a way that only the fascists of the ’30s fostered.”

ANDREW SULLIVAN: The fundamental truth about this election in my opinion is that it’s marking the moment when America becomes a majority/minority country.

CHRIS MATTHEWS: And it’s a reaction to that?

SULLIVAN: It is a reaction to this across the Western world. We’re in a fascist moment here, and that is the huge force behind this campaign.

MATTHEWS: Why would whites, as they become an actual arithmetic minority, why would they become fascist?

SULLIVAN: Because they’re defending what they think — first of all, they don’t believe they had any choice in this. That the massive demographic shift, which is not actually about African-Americans, it’s mainly about Latinos —

MATTHEWS: I know it is. The African-American percentage in this culture is about where it’s been since we were born. It hasn’t changed much.

SULLIVAN: Yeah, and, but we have had a massive demographic change in terms of brown people and black people and the future. And that’s happening also in Europe. And the reaction is, we don’t want this country and we didn’t choose it. This is why immigration is so central. Because they believe, “Adios America,” to use the other fascist Ann Coulter’s term. They believe this America is ending, their identity is ending. And that is why Trump is going to win this election, because there are many, many people —

SULLIVAN: And Islam is the other critical factor that has galvanized this. It’s the gasoline on the fire. The fear that aliens are coming into our country and Trump has deliberately fostered in a way that only the fascists of the ’30s have fostered the notion that these people are a potential fifth column coming to kill you and attack you and rape you.

Back to Trump is Hitler. The left is running around in circles.

Funny, Obummer has been pictured with that smug high chin look that Mussolini perfected.

The camera’s-eye view up the nostrils is what always bugged me about both Benito and Barry.

Democrats *always* need
someone else
to blame for their own mistakes.

The Alt-Right is a core component of Trump’s support and much of it is rooted in racial constructs.

This brand new book addresses that phenomenon on Amazon – #NeverTrump: Coulter’s Alt-Right Utopia – and is available at https://www.amazon.com/dp/B01M9JQU7Q/.

Just another mad up bogie man from the wacky left.

14 million plus voted for Trump in the primaries. Who were theses voters? Working men and women who feel they have been betrayed by the federal government. People who for years trusted the government to do the right thing but found that was not the case.

The left has to try to destroy Trump because Crooked Hillary is such a flawed candidate under active criminal FBI investigation. The first time in out history that a nominee for the presidency is under FBI investigation!
What has happened to the Democratic party today?

They’re not a “core component”, more like a fringe with pretentions. You’re cynically and dishonestly trying to use them to paint a broad brush against the rest of the electorate with varying levels of support for Trump – or varying levels of opposition to Hillary.

So how’s your new job with CTR?

THE lack of character from people such as Andrew Sullivan are what makes it so easy to dismiss him out-of-hand. The issue of ‘race’ is almost the first thing to fall from his face, yet it has nothing to do with BLM or Muslim supremacists. THEN, of all things he leaves the country of his birth to live in America. Is it any wonder the British are embracing their invaders, learning the fine points of sharia?

Race and Hitler…sigh…the empty vain slander of the weak sisters on the liberal left. They have a death wish, as exampled by their lifestyles and ideologies: so angry the rest of America doesn’t want to join them. Perhaps their Muslim overlords will grant their death wish in 20 years if America doesn’t learn to stand up and say ‘enough’.

The Entire History of the Democrat Party is rooted in Racial Demagoguery.

The Democrat Terrorist group known as the KKK was at the root of Democrat power for 50 years. Now, Democrat power is derived from Racial politics dividing each group and creating animosity.

La Raza is a core component of Hillary’s support and much of it is rooted in racial constructs.

Trump’s not the candidate with the literally fascist “Stronger together” tagline.

Must be desperate to bring Sullivan out from wherever he was hiding.

We get it, Andrew. You were born gay. But you choose to be stupid.

ACCORDING TO THE most recent documented scientific reports, there are NONE born ‘gay’. Sodomy is a choice, just like stupidity.

That was a joke.

Read the most recent scientific documented reports, have you?

They’re probably easy to find; in the same journals with all the inside dope on the Global Warming Consensus.

It probably got too wet under his rock.

…. because “Make America Great Again!” is so fascist…
Ghads.

They call people things that they themselves are in attempt to beat their opponents to a talking point.

As if the use of public force to disenfranchise Americans was not enough, his factions conduct baby hunts, baby trials, and celebrate selective exclusion (“=”, [class] diversity). Sullivan needs to change his perspective. Raise the rainbow flag, he is the leftist.

I wonder if Sullivan has picked out a favorite rooftop he’d like the Muslims to throw him from … assuming of course that Trump fails and the country is “transformed” into Sharia heaven.

The Left has spent the last half century making America into a authoritarian European socialist country with a globalist bent.

Of course, had Bernie won the Democratic nomination, the country would have switched to socialism at which point it will be national socialism (i.e. Nazi).

Totalitarianism… like government control over thought and speech. Thou shalt bake that cake! Thou shalt allow that schlong in your daughter’s shower! Yeah, take a look at the last 8 years.

Government control over industry/productive capacity…. like Government Motors, or Obamadonglecare?

Thus proving that Sullivan has no idea what fascism was, in addition to having no idea why so many people are voting for Trump, or at least against Clinton.

Whether they speak in support of liberal or conservative values, media have totally neglected to give us a reason to care what they think. Why would I care what Andrew Sullivan thinks? For that matter, why would I care what a Hannity or O’Reilly think? Every opinion between the left/right poles is covered by some talking head or another, meaning at least all but one is wrong.

Cable TV news is dead. I cannot recall the last time I heard something on cable TV news I did not already know from the internet. I’ve essentially stopped watching it. I listen to Rush and Levin on the radio, bot more for the entertainment value than political insight. Them two fellers is hilarious, very funny conservatives.

Please tell me you’re not still paying for cable tv. Cut the cord. Even if you don’t watch it, you’re paying Rachel Madcow’s salary.

Which party is hiring brownshirt thugs to disrupt campaign rallies with violence? We know from wikileaks that its the Democrats doing this.

I think what gets me most is that shills like Sullivan float their bs without an ounce of shame. The Left is so corrupt.

These scum never explain how muslims will benefit our country though there is overwhelming evidence that they intend to destroy our country.

Excitable Andrew is wack-a-doo…but we knew that already