Does That Make the New York Times Tax Cheats, Too? 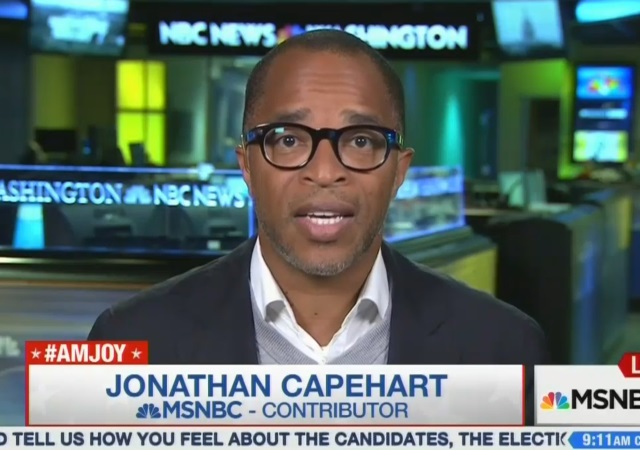 Make up your mind, Jonathan! Appearing on today’s AM Joy, the Washington Post‘s Jonathan Capehart,  accused Donald Trump of “cheat[ing] the government” on his taxes . . . despite unequivocally stating precisely 29 seconds earlier that “what he did is legal.”

So is every person and entity that takes legal deductions on his tax return “cheating the government,” Jonathan? Does that make the New York Times a tax cheat, too, in your view? After all, as per Forbes, “for tax year 2014, the New York Times paid no taxes and got an income tax refund of $3.5 million even though they had a pre-tax profit of $29.9 million in 2014.”

JONATHAN CAPEHART: While what he did is legal, it certainly, I think, to a lot of people’s mind is sort of morally repugnant because we at least at one time held our presidential candidates to a higher standard. If you’re going to govern this country, if you’re going hold the lives now of 330 million people in your hands, the American people need to be reasonably assured that you have their safety as the highest priority is but also you’re not going to cheat the government that you are in charge of.

“you’re not going to cheat the government”

What the hell does he think Crooked Hillary is going to do?

Jonathan Capehart is just another clueless twit that would not know what the truth is if it bit him in his ares.

The truth is what Clinton tells him it is.

This story is just a giant nothing burger.
More spin from the Gray Lady going down!

How illogical can lefties get? (I know — infinitely):

Trump acts entirely as authorized by the tax laws but that’s cheating the government. Because Trump.

He wants people running for office to live according to “the highest ethical standard”.

We’d be delighted if any of them were living according to ANY ETHICAL standard.

Herein lies a rub: when all you have is a choice of oligarchs, and oligarchs live by different rules, how do normal people pick an oligarch to rule them?

Sounds like the Times may have knowingly received stolen property. Removing the tax returns from the New York State Department of Taxation and Finance constitutes theft.

Weren’t all the DNC documents stolen, too? They are going to investigate the Times right after they catch the hackers since the Times published them both.

Not sure if the DNC Documents were stolen documents. That depends greatly on the particulars. In any case, the Obama Administration has been very aggressive about punishing leakers.

Tax Returns are a whole other matter. They are protected materials. Unauthorized removal from the tax agency would be a theft.

The closest analogy would be if someone obtained and published Obama’s protected long form birth certificate from the State of Hawaii.

I see your point, although the analogy needs work. A better analogy would be if a document that Obama was require by law to file, declared he was not a citizen. Of course, no such document has been found.

Tax documents are among the few that deserve and receive a special level of protection. However there is strong evidence that a foreign power released the DNC documents to influence the election. That should be troubling to everyone.

The hacking of the DNC site was a felony. If you don’t wish to call it theft, then call it what you will. It was a felony, nonetheless.

I believe that there is a doctrine in law the a newspaper is protected as long as they did not participate in the theft. It was established in the Pentagon Papers case. Please forgive me if that is the wrong case. I was brought up by a lawyer, but I am not.

Are Trump’s tax returns relevant? – damn tootin’ I am quite familiar with the uneven tax advantages for investing in real estate. Has Trump taken an extremely aggressive stance. Yes. It is quite possible that Trump has not paid for even 1 PTSD treatment with Federal Income Taxes.

There is a strong case that Trump is absolutely the last person you would want to be head of a populist movement.

The ny times has cheated the truth so many times, we’ve lost count.

So why not cheat on their taxes?

For Example: in 2014 Trump paid as much in taxes as Apple, Amazon, Twitter and the New York Times COMBINED.

doesn’t like trump because he thinks his legal but “unethical” tax returns “might” endanger 330 million u.s. citizens….

likes Hillary in spite of the fact she dropped the ball and let 4 u.s. citizens die in lybia

This True Believing clown is able to quickly spit out contradictions without evidencing any cognitive dissonance whatsoever.

There must be a political version of sociopathy.

Capehart is troubled because DJT complied with the very tax laws enacted by DEMOCRATS who controlled the House from 1931 to 1994,* including chairmanships of the powerful House Ways & Means Committee.

Yeah and the Romans controlled the better part of the world for 1000 years.

If you stretch really hard, maybe you can find that he paid for a bullet. 1 bullet is pretty generous for a billionaire.

In 70 years on this planet, it is hard to find one act of civic benefit by DJT. I guess it is fitting that he should start his civic career as President.

You forgot to mention Hillary’s pay-for-play foundation and the hundreds of thousands she was paid per speech to Wall Street Banks.

Where are the converse e-mails in which HRC asked if someone requesting a meeting had made a contribution? Where are the emails from HRC asking someone to make a contribution after they requested a meeting. Where is the evidence that anyone got anything other than a meeting? Evidence!

The HRC speeches may well have been corrupt. Do you have any proof; as Trump goes down, down, down and out?

YOU, also didn’t mention that from 2001-2007, the repugnicans had complete control of the government and made things worse. I didn’t say you forgot – I said you didn’t mention. Your case was full of holes to begin with. It doesn’t get better with repetition.

Callum Borchers of the Washington Post explains the legal jeopardy that could await the Times:

The New York Times executive editor said during a visit to Harvard in September that he would risk jail to publish Donald Trump’s tax returns. He made good on his word Saturday night when the Times published Trump tax documents from 1995, which show the Republican presidential nominee claimed losses of $916 million that year — enough to avoid paying federal income taxes for as many as 18 years afterward.

It shall be unlawful for any person to whom any return or return information (as defined in section 6103(b)) is disclosed in a manner unauthorized by this title thereafter willfully to print or publish in any manner not provided by law any such return or return information. Any violation of this paragraph shall be a felony punishable by a fine in any amount not exceeding $5,000, or imprisonment of not more than 5 years, or both, together with the costs of prosecution.

Baquet said during a panel discussion at Harvard that if the Times’ lawyers advised him not to publish Trump tax returns, he would argue that such information is vital to the public interest because the real estate mogul’s “whole campaign is built on his success as a businessman and his wealth.”

FBI will decline to pursue the case because there was no intent to cause harm to the nation, amirite?

On the contrary, there is an obvious attempt to do good and expose a grifter.

Understand that Capehart is merely voicing a standard and mainstream Leftist mantra that is widely promoted by Dumb-o-crat pols — to wit, that the fruits of one’s labor belong first and foremost to the federal government, and, then, whatever the apparatchiks in their majesty and benevolence deign to allow the laborer to keep, is her or her rightfully earned income.

Obama was just as unabashed in his remarks, spoken a few years ago, denigrating the notion of tax cuts, stating that we couldn’t afford to “spend” money on tax cuts! Note the default posture assumed by Obama’s flawed mindset, here — that one’s income is de facto the property of the U.S. federal government, at the outset; ergo, the government allowing workers to keep more of what they earn is tantamount to spending!

Mailbox-gate — the anonymous transmission of Trump’s tax returns — is only the latest revelation of JournoLists of the Fourth Estate.

The New York Times had no problem with this deduction or Trump’s behavior when he was a Democrat.
FLASBACK (1995) : NYT CROWNS TRUMP ‘THE COMEBACK KID’…government leaders in New York honored Trump for pulling off what they called “the comeback of the decade”
http://archive.is/1hMuB

His action was perfectly legal. Indeed the IRS encourages this type of action by publishing public service announcements.
https://www.irs.gov/uac/irs-reminds-taxpayers-they-can-use-stock-losses-to-reduce-taxes

DJT has a lot of company in taking that offset, including

and, surprise, surprise! In addition to the New York Times, the Washington Post CEO also paid no taxes under the same deal Trump did.
http://www.americanthinker.com/blog/2016/10/trump_taxes_and_the_emtimesem.html#ixzz4LwEUMn4D

In my opinion, an offset of long-term capital losses against income is reasonable public policy, because economic stumbles are a fact of life for all businesses, and allowing them some leeway to recover mitigates the effects of revolting economic developments, thereby preserving the livelihoods of employees.

Both the New York Times and the Washington Post have published opinion articles discussed as news, about Trump doing exactly what he should have done.

The New York Times/Washington Post article by Maggie Habermas and Nicholas Fandos pretends that Trump did something extraordinary, and his campaign is suffering and stumbling over this kerffluffel.

The Associated article by Nicholas Riccardi and Anne D’Innocenzio, pretends that this deduction is limited to few Americans, which is false. It is not differential treatment. All it requires is a loss, and many millions of Americans have, for example, businesses and retirement savings in stock accounts that could qualify in a bad year.

Neither article mentions that Hillary Clinton, the New York Times and the Washington Post have all taken advantage of the same offset.