“Prices will skyrocket after Crooked Hillary gets in.” 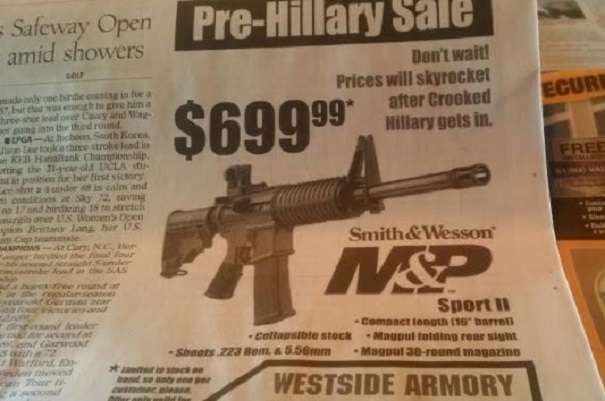 Not only does it seem that some on Team Trump are preparing for his possible loss, but one Las Vegas gun shop is preparing customers for a Hillary win with a “pre-Hillary sale” on merchandise.

The Las Vegas gun store Westside Armory is predicting a Hillary Clinton victory in November, and it has a message for customers: Buy now, because things are going to get expensive.

In an advertisement over the weekend in the Las Vegas Review-Journal, Westside Armory said it was holding a “Pre-Hillary Sale” on tactical rifles, warning of a price surge if the Democratic nominee wins the presidential election next month.

“Don’t wait!” the advertisement reads. “Prices will skyrocket after Crooked Hillary gets in.”

The words appear alongside a picture of a Smith & Wesson M&P Sport II, a semiautomatic tactical rifle that Westside Armory advertises for $700. The Smith & Wesson website says the rifle is used for hunting, recreational shooting and “home protection.”

Hardly. A sale now implies that someone is expecting Hillary to lose, and is willing to bet some perfectly good inventory on it.

If Hillary wins, they certainly don’t need to thin out their stock at lower prices now. They’ll be able to sell everything they have, and at just about any price, in a couple of weeks.

If Hillary loses, she’ll no longer be a club they can use to motivate buyers; she’ll be safely enthroned on the rubbish heap of history, and out of the gun control game for good. So vendors had better use her now, while she’s still a menace.

Only 699.99? Some sale, he was asking a $100 less a few months ago.
The article is mostly liberal nonsense though.

Defend it against the barbarians,” said one recent Westside ad for a $599.99 Smith & Wesson M&P AR-15 rifle equipped with a 30-round Magpul magazine. Asked about the contradiction, Hopkins says, “In the end, I guess I’m just a capitalist.”