“Even representing a ‘thing/idea’ is dangerous.” 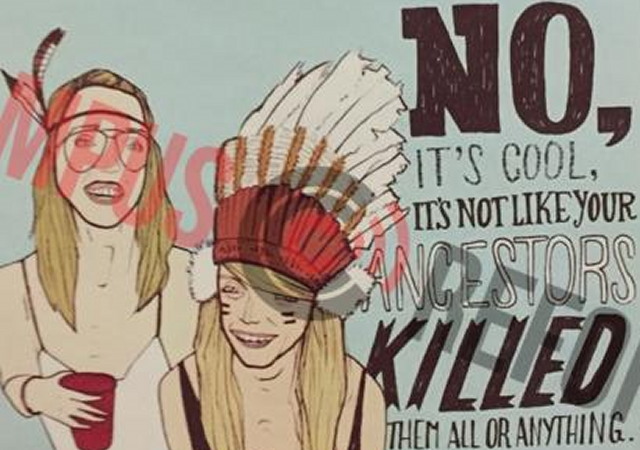 The left is Hell-bent on taking absolutely all the fun out of Halloween. Has it occurred to anyone on the left that someone might want to dress a certain way for Halloween as a celebration of a particular culture?

The University of Massachusetts, Amherst is posting “cultural appropriation” posters in each of the residence halls on campus featuring a detailed “racism evaluation and assessment meter.”

The initiative is being spearheaded by the Center for Women and Community, the Center for Multicultural Advancement and Student Success, and the campus’ diversity office, the Stonewall Center.

“Don’t be an asshole,” one display urges students, providing several leaflets to help them understand the effects of cultural appropriation.

The board also includes a poster to help measure the “threat level” of a potential costume using what it calls the “Simple Costume Racism Evaluation and Assessment Meter” (S.C.R.E.A.M.) which poses several costume-related questions, the answers to which take one to various points on a “threat meter” that ranges from green (low) to red (severe).

If one intends to represent a person on Halloween, the only way to get a “green” threat rating is for the person to be of one’s own race. If one represents a person of another race, the “threat level” increases roughly in conjunction with the amount of makeup that one intends to use.

Even representing a “thing/idea” is dangerous, though, the flyer says, warning against costumes that can only be understood in the context of “controversial current events or historically accepted cliches,” particularly if “these events or cliches relate to a person or people not of your race.”

If anybody besides a European American dresses up as Superman, Batman, Spiderman, Mario, Wonder Woman, Donald Trump, Hillary Clinton, Maverick or Hugh Hefner; I’m going to go postal and whine all over the Internet about it. How dare you appropriate somebody of MY culture.

THAT’S RIGHT! Halloween is a European Catholic custom, so all you heathens (Africans, Asians, Indians, Native Americans and Middle Easterners) can stay home and suck your thumbs and whine how ‘unfair’ life is! THIS IS OUR HOLIDAY, and you’re not welcome! …AND STAY OUT OF OUR CANDY TOO!

Mario is not European, he is a made up video game character (not being grounded in any form of reality is also the case for many of your other terrible examples). Mario is not part of your culture, when someone dresses up as Mario or Superman they are not cheapening the value of cultural garb, they are wearing a costume. Culture is not a costume. Unless you are going to assert that you are a descendant of Mario, which would just make you look more unintelligent, you should invest some energy into becoming a more respectful human being.

Oh, look another made up term by the liberal grievance industry.