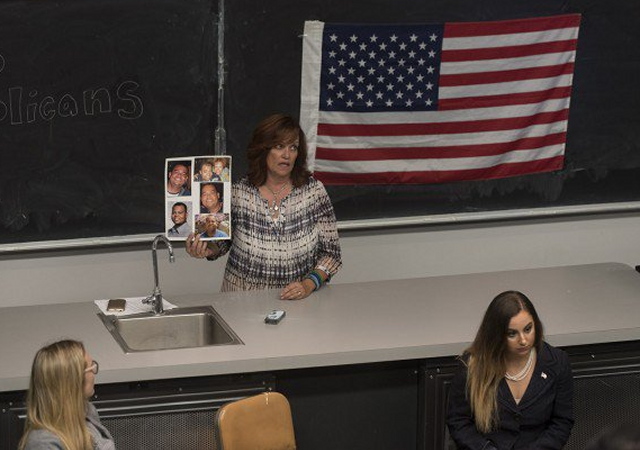 The left is so determined to preserve their precious narrative that they’ll attack victims to do it. These students should be expelled.

When a mother who lost her son to a drunk driver is talking, the polite thing to do is let her share her grief and resolve.

Protesters at a Bruin Republicans event Thursday at UCLA decided that their feelings were more important than listening.

The Daily Bruin reports that a student hummed “the rhythm of various cultural songs” and others “joined in by snapping their fingers” to drown out Sabine Durden’s speech against illegal immigration.

Durden said her son was killed by a drunk driver who was on “his second round of probation,” and was previously deported to Guatemala for earlier felonies.

She has campaigned with Republican presidential nominee Donald Trump and backs his proposal to build a wall “because we need to stop the bleeding.” Durden said that “every illegal student takes the place of an American one”:

These idiots will find out how it really works when they have to get out into the real world. They will be saddled with 90 grand in student loans and the only jobs available to them (Burger King, McDonalds etc) will all be taken by Mexicans.

No one under 30 should be allowed to vote.