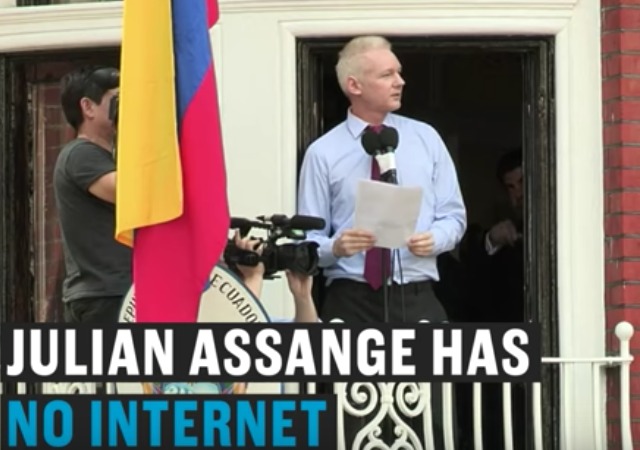 Wikileaks founder Julian Assange lost his internet access at the Ecuadorian embassy in London over the weekend after the website published three Hillary Clinton speeches to Goldman Sachs. First the organization blamed the Ecuadorian government, but today the group claimed Secretary or State John Kerry pushed the government to deny Assange access to the internet.

The State Department has now denied Kerry had anything to do with the incident:

The John Kerry private meeting with Ecuador was made on the sidelines of the negotiations which took place pricipally on Sep 26 in Colombia.

On that day, the Colombian government signed a peace deal with the Marxist rebel group FARC, who have been involved in a fight for 52 years. Kerry was involved in the process of that deal for the past two years.

Ecuadorian embassy employees refused to comment after Wikileaks announced the cut off on Monday. But that changed today:

Translation: “Faced with speculation of the last hours, the government of Ecuador reaffirms the validity of granted asylum to Julian Assange four years ago. We reaffirm that the protection of the Ecuadorian state will continue while the circumstances that led to the granting of the asylum remain.”

Assange has lived at the embassy since 2012 to escape extradition orders to Sweden “to face questioning in a sexual molestation case involving two female Wikileaks supporters.”

The anti-secrecy organization announced the cut off on Sunday right after it released transcripts of three Hillary speeches to Goldman Sachs, one which she pushed for covert action in Syria:

According to the latest leaked emails, Mrs Clinton told a Goldman Sachs conference she would like to intervene secretly in Syria.

She made the remark in answer to a question from Lloyd Blankfein, the bank’s chief executive, in 2013 – months after she left office as secretary of state.

“My view was you intervene as covertly as is possible for Americans to intervene,” she told employees of the bank in South Carolina, which had paid her about $225,000 (£185,000) to give a speech.

Mrs Clinton – who is accused of being hawkish by liberal critics – added: “We used to be much better at this than we are now. Now, you know, everybody can’t help themselves.

“They have to go out and tell their friendly reporters and somebody else: Look what we’re doing and I want credit for it.”

Wikileaks continues to publish emails its obtained from hacking into Hillary’s campaign chair John Podesta’s Gmail account. It looks like the interruption with Assange’s internet won’t slow down the group since it published the eleventh batch this morning.

Q: And why do you release control over the Internet?

A: So you don’t have to worry about the 1st amendment stopping you from blocking the Internet from being used for Free Speech.

The State Department has now denied Kerry had anything to do with the incident:

Oh, well, that’s it then. You can trust the State Department. Hillary Clinton used to be in charge there, so you know lying is a foreign concept to them.

For me, it’s come to the dilemma that if I were to learn of an illegal activity that could affect national security and possibly involved some US politicians, I do not know of any governmental agency that I would trust enough to call. For an old guy like me, that is truly startling! From bill clinton onward, our government has become nothing but a pack of self-serving lying cronies. There doesn’t seem to be any of the “Country first” professional government workers as I remember from post-WWII. Look at the FBI and how we read about how angry the agents are but no action is forthcoming from them. I understand a single whistleblower would be a dangerous position but if they walked out en masse, then they would all be protected. I truly do not know where we are headed as a nation.

inspectorudy, we are headed for anarchy. We may already be there.