“I blame Hillary Clinton personally for the death of my son” 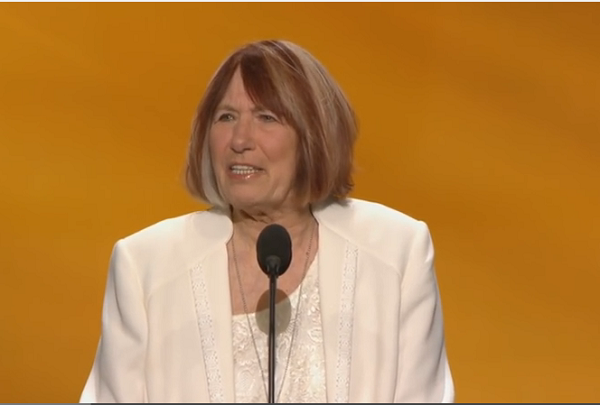 After creating quite a kerfuffle by threatening to bring Gennifer Flowers to the second presidential debate, Trump has, arguably, made a better choice for the third:  the mother of State Department employee Sean Smith killed in the 2012 Benghazi attacks.

Republican presidential nominee Donald Trump has invited the mother of a State Department employee killed in the 2012 Benghazi attacks to attend Wednesday’s final presidential debate of 2016.

Pat Smith is a vocal critic of Hillary Clinton who blames the former secretary of State for her son Sean’s death during the attacks on the U.S. compound. She told Yahoo News on Monday that the Trump campaign invited her, and she believes she will be in the “front row” of the debate in Las Vegas.

The Trump campaign confirmed the invitation to Yahoo with a statement from Michael Flynn, a retired Army lieutenant general and Trump adviser who said the campaign hopes Clinton will adequately answer why four Americans died in Benghazi, Libya, in 2012.

Smith spoke at the Republican National Convention in Cleveland this summer, where she said, “I blame Hillary Clinton personally for the death of my son” and accused the Democratic presidential nominee of pointing the finger at an anti-Islamic internet video as the cause of the attacks.

Pat Smith, you may recall, also stated in her RNC speech: “Hillary lied to me and then called me a liar.”

I thought he “invited” Gennifer Flowers to the 1st debate.

Trump has, arguably, made a better choice for the third

And what argument would that be?

Anything which reminds the voting public of Hillary’s crimes is a good choice.

The argument being that inviting Gennifer Flowers opened himself up to the same treatment re: the women making allegations against him. This time, he invited someone who makes more sense in an issues-based sense; Hillary was involved in the Benghazi attack that killed Pat Smith’s son.

Does this makes sense now? If not, let me know, and I will try to explain it more clearly for you.

Wgen are all of this woman,s lies going to catch up with her. Her MELT-DOWNS, scare me more than Trumps temper.

Trump should tell Hillary, “Mrs. Pat Smith is in the audience tonight. Could you please explain to her why you didn’t send help when her son was under attack in Benghazi?”

This would have been awesome! He kind of mentioned the guests he had, but he didn’t make the point strongly enough. She’s incredibly vulnerable on Benghazi (and knows it, thus the “what difference at this point does it make?” hissy fit).