‘This Isn’t Going to Work’: Matthews Shuts Down Trump Surrogate

‘This Isn’t Going to Work’: Matthews Shuts Down Trump Surrogate 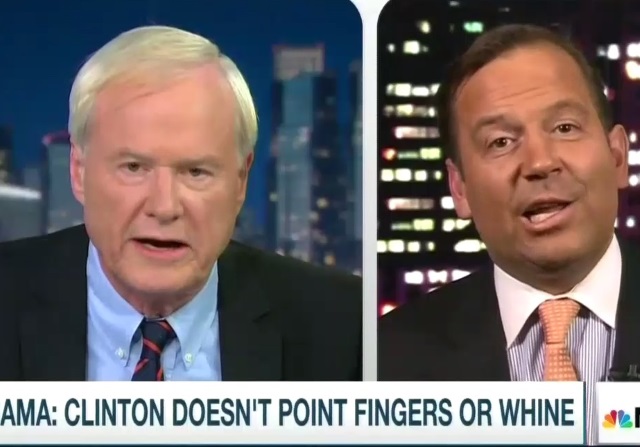 On last evening’s Hardball, when Trump surrogate Steve Cortes said that voters across America don’t care about Donald Trump’s refusal to blindly accept the election outcome, Chris Matthews shut him down. After calling Cortes an “elitist,” Matthews declared “this isn’t going to work,” cut Cortes off, and moved to reliable liberal Ruth Marcus of the Washington Post.

By coincidence, in this morning’s Quick Hits, this Insurrectionist wrote “the liberal echo chamber has contracted a bad case of the vapors over Trump’s statement, but hard to believe many actual voters out in America give much of a darn.” Guess elitist minds think alike 😉

Note: Cortes cited Joe Scarborough’s impassioned comments on today’s Morning Joe on the subject. We blogged on it here.

STEVE CORTES: Chris, listen, I will tell you this. I am very honored to be a surrogate of Donald Trump. It’s not always the easiest job, because he often doesn’t speak with nuance, and at times he speaks very inartfully. And I think he did last night. However, he clarified that today. And I think this is much ado about nothing. I would echo the comments of your colleague, Joe Scarborough, who said this morning, this means a lot to media elites, it doesn’t mean anything to voters in Scranton, Pennsylvania —

CORTES: Who can’t pay their bills.

MATTHEWS: Thank you, thank you for being an elite, because that’s an elitist comment. To say it will play in Peoria, that’s the old John Ehrlichman line in the Nixon administration. The idea that people out there in places like Erie, they’re going to go along with a guy who says this is professional wrestling, this is rigged. It’s not about close elections, it’s not about irregularities.

MATTHEW: Who says this election’s rigged? Who says it? Do you say it?

CORTESL This is not important to their lives —

MATTHEWS: Did you say it was rigged?

MATTHEWS: Do you believe this election is rigged?

MATTHEWS: No he didn’t. He did not take back the rigged charge. He has not taken it back.

CORTES: He clarified today, he said, of course — he went even further than you —

MATTHEWS: Okay, this isn’t going to work. I’ve got to talk to Ruth for a minute. Ruth, a couple things he said —

It was OK when SoreLoserman refused to accept the results of the 2000 election though, and manufactured freak-outs about “butterfly ballots” and “dimpled/hanging chads,” right Christine?

They whine like the little bitches that they are TO THIS DAY over that crap, despite multiple recounts which showed an increased margin of victory for Bush.

I’m surprised you didn’t talk about a pair of boobs at the Al; Smith dinner yesterday.

In 2014 my alma mater, The Ohio State University, brought Chris Matthews in to speak at Spring Commencement. How embarrassing is that? They used to get people like George W. Bush, Bill Clinton, Christopher Reeves, John McCain and Bill Cosby. Of course, the year I matriculated, we had Brian “Chopper-whopper” Williams…

Living in MA and working in Cambridge I was subjected to seeing thousands of “Re-Defeat Bush” bumper stickers in 2003-04. I venture to guess that many of those sporting said bumper stickers are now in shock about Trump’s comments during the debate.

And the funny thing about the Gore situation is that if he’d taken his own state Florida wouldn’t have mattered.

Actually, he’s wrong. They do care.

All this recent buzz is about one of the fundamental rules of the system which keeps someone comfortably at the top. Call the someone whatever you wish; the Illuminati, whatever—it doesn’t matter, it’s just a label.

Once it’s apparent that the game is rigged, it follows that it’s rigged to that someone‘s advantage, which in turn implies that that someone really exists and is devoted to staying on top. That someone—and the system which keeps it on top, year after year, decade after decade—is what Trump has been opposing all along. Which is why someone and its allies have been fighting Trump so viciously. And why they all have to insist that no, nothing’s rigged, and anyone who wants to play nicely with the system—and, for reward, perhaps become part of it—must agree.

Trump’s appeal is based on the fact that he’s the only person prominent in politics today who is fighting the someone. Therefore it’s important that he not surrender a fundamental tenet of the theory that the someone exists and is intrinsically anti-American.

So, they do care in Scranton. If he’s going to cave and surrender, like so many of the putative conservatives sent to Washington by Tea Party voters, his campaign evaporates, and he becomes just another one of those political wannabees who are “all the same”. That is, allies, witting or unwitting, of the system and the people it keeps in power.

First, as you tacitly admit, there has been considerable “churning” in the representation of the nation at the federal level. But ALSO at the state and local levels.

Second, while it has slightly declined during the Barracula years, economic churning is still a major feature in American’s lives. Those on top are being replaced by those coming up, etc.

Third, T-rump is the personification of a “someone” in your analysis. He’s been rigging every system he can for decades, and often screwing the little people over in this drive for more wealth and power. Save me from being “saved” by that oligarch, Mr. Establishment, thank you very much.

Poor Raggsy, no one is paying any attention to your blithering lunacy any more.

Chris Matthews is fighting under the handicap of having been so much in the tank for Gore in 2000 and Obama in 2008, and all of those video clips of him expounding endlessly about how the SCOTUS stole the election for Bush.

Thankfully (for him), the MSM won’t call him on his obvious slanted coverage, and neither will the GOPe.

Poor Chris. He forgot Obama had an organization in 2008, ACORN, dedicated to stealing/fixing votes. And he forgets Obama’s war on states that want photo ID to prevent voter fraud.

Throw another baby on the barbie. Stability.

Trials of reformed dictators and American ambassadors by sodomy and abortion. Stability?

Pro-Choice. A quasi-religious/moral philosophy from the twilight zone, selective and opportunistic, unprincipled and unpredictable. [Unqualified] Progress.

I am shocked to hear that Chris Matthews and MSNBC will only allow GOP surrogates to support what helps the leftist agenda and will mic-censor them if they fail to do so. Shocked, I say.