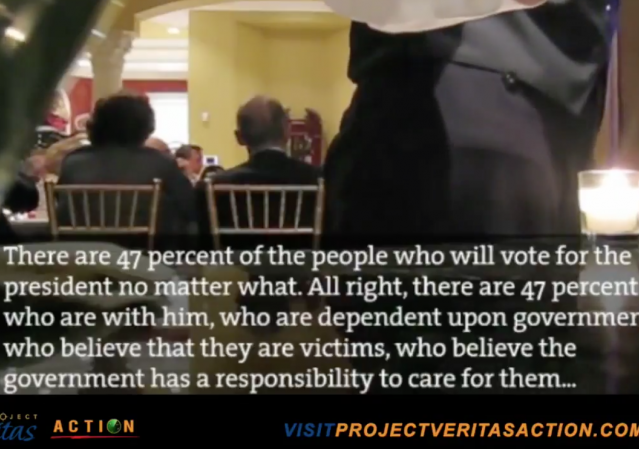 Project Veritas has unmasked the man behind the 47% video that shook the 2012 presidential election. A hidden camera captured Republican Presidential Candidate Mitt Romney explaining to a crows of moneyed donors that 47% of the country will not vote for him because their belief is that government should satisfy their needs. The video went viral, damaging Romney’s White House hopes.

The 47% video was edited to leave out crucial parts of Romney remarks, editing Professor Jacobson picked up on at the time.

And now, the man behind the mask:

Romney was 100% correct with that 47% remark. As Alexis de Toqueville (and/or Alexander Tytler, Arnold Toynbee, or P.J. O’Rourke) once wrote:

“A democracy cannot exist as a permanent form of government. It can only exist until the majority discovers it can vote itself largess out of the public treasury. After that, the majority always votes for the candidate promising the most benefits with the result the democracy collapses because of the loose fiscal policy ensuing, always to be followed by a dictatorship, then a monarchy.”

The number doesn’t appear in the classical literature. And it makes a difference. That class of voter will always be with us. If it constitutes 5% of the vote, then no big deal. If it constitutes 55%, then the country will survive only as long as it can print money which retains any value at all (i.e., not very long).