The Great Wall of Turkey

The Great Wall of Turkey

Will antisemitic BDS activists call it an “Apartheid Wall’ 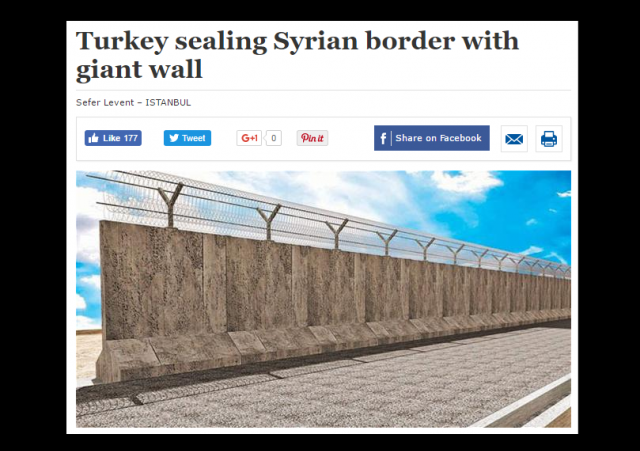 Turkey is building a huge wall along its border with Syria. According to Hurriyet Daily News:

The Housing Development Administration of Turkey (TOKİ) has undertaken the construction of the remaining 700 kilometers of the wall being built on Turkey’s border with war-torn Syria, after the construction of the initial 200-kilometer-long concrete wall on the border was completed jointly by the Defense Ministry and neighboring provinces governor’s offices.

After completing the tender process for a 200-kilometer-long section of the to-be built wall and preparing works for the remaining section, TOKİ was expecting to finish the “security wall” in five months, its head, Ergün Turan, said. The wall is expected to block uncontrolled human passage across the border.

“As far as our national security is concerned, the increase of border security with Syria carries huge importance. With the completion of the wall, our border will become more secure,” said Turan, adding that the concrete blocks would cover the entire border with their two-meter-wide and three-meter-high dimensions. Turan said the sections of the walls in the southeastern provinces of Hatay and Şanlıurfa were mostly completed and work was ongoing on other sections. He added that the blocks were portable, weighing seven tons each, and their tops were being covered with razor wire.

Bonus Question: Will malicious BDS activists call it an “Apartheid Wall”? Or will they reveal, once again, that they only use that term as they have redefined it against Jews?