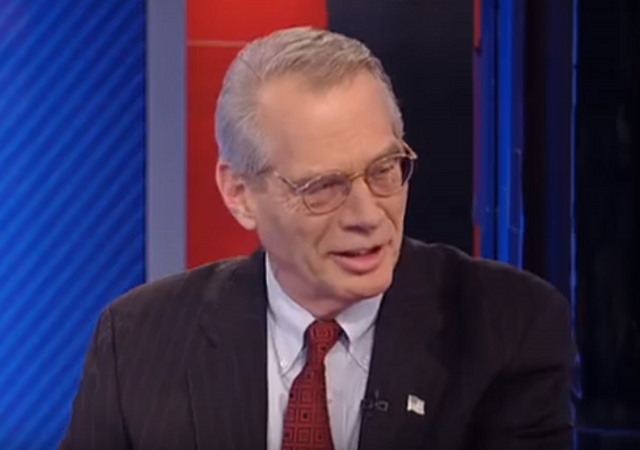 Helmut Norpoth, a professor at Stony Brook University on Long Island, has developed a model for predicting elections which, when applied, has correctly predicted every presidential election back to 1912 with one exception – the 1960 election.

He has been predicting a Trump win for months and he’s standing by his forecast.

A SUNY professor continues to project Donald Trump as the likely winner of this year’s election and he’s critiquing polls that predict the opposite in a new opinion piece.

Helmut Norpoth has been predicting a Trump victory since early this year. His model currently projects a win for the Republican with a certainty of 87 to 99 percent…

That flies in the face of just about every other major election forecast out there, which mostly give an edge to Democrat Hillary Clinton, notes the Daily Mail.

Norpoth wrote in The Hill that although the race looks decided, current polling methods are “bunk.”

The projections for Clinton are all based on opinion polls, which are flawed because they don’t reflect actions, Norpoth wrote. They’re about what voters think of Clinton or Trump, but they can’t tell us exactly how voters will act on those thoughts.

“It is ingrained in all of us that voting is civic duty,” he says. “So nearly all of us say, oh yes, I’ll vote, and then many will not follow through.”

Instead of opinion polling, Norpoth relies on statistics from candidates’ performances in party primaries and patterns in the electoral cycle to forecast results. The model correctly predicted the victor in every presidential election since 1996, according to the Daily Mail.

This video is from February but it gives you a chance to see Norpoth discussing his methodology with Jim Varney of the FOX Business Network:

t is 87% to 99% certain that Donald Trump will win the presidential election on November 8, 2016; 87% if running against Hillary Clinton, 99% if against Bernie Sanders…

It is a statistical model that relies on presidential primaries and an election cycle as predictors of the vote in the general election.

Winning the early primaries is a major key for electoral victory in November. Trump won the Republican primaries in both New Hampshire and the South Carolina while Hillary Clinton and Bernie Sanders split the Democratic primaries in those states.

What favors the GOP in 2016 as well, no matter if Trump is the nominee or any other Republican, is the cycle of presidential elections. After two terms of Democrat Barack Obama in the White House the electoral pendulum is poised to swing to the GOP this year.

In a match-up between the Republican primary winner and each of the Democratic contenders, Donald Trump is predicted to defeat Hillary Clinton by 52.5% to 47.5% of the two-party vote.

If the walking dead, G. Soros and immigrants don’t steal it.

Since Der Donald is a winner, shouldn’t he have taken that into account when he started his run?

Don’t forget the felons aka Terry McAuliffe’s attempt to hand Virginia to Clinton by adding 200,000 Democrats to the voter rolls.

It’s mentioned that the model only failed to correctly predict one election: 1960.

But it’s widely acknowledged that the 1960 election was stolen on behalf of JFK by Mayor Daley of Chicago, who waited until the downstate, Republican vote was counted in Illinois before submitting a sufficient number of fraudulent votes out of Chicago to give the state, and the election, to Kennedy.

So it could be said that, in an honest election, the model also worked in 1960, and thus has a perfect record.

Unfortunately, so far, 2016 is showing signs it may be an even bigger year for vote fraud than 1960.

I love retrospective models. The do have the advantage of 20-20 hindsight. But given that amazing power and the obvious parallel to 1960, how come you are comfortable with a model predicting a Trump victory?

Hey, dipstick? How do you test a model?

You feed it the inputs from past events you know the outcome of and see if it reproduces the outcome you know happened.

Which is why AGW is BS: Past inputs don’t predict current climate.

Helmut Norpoth, a professor at Stony Brook University on Long Island, has developed a model for predicting elections which, when applied, has correctly predicted every presidential election back to 1912 with one exception – the 1960 election.

That’s called postdiction. It could indicate reliability of the model, or it could just be curve-fitting.

The model correctly predicted the victor in every presidential election since 1996, according to the Daily Mail.

Norpoth wrote in The Hill that although the race looks decided, current polling methods are “bunk.”

A clue that Norpoth is bunk is that he handwaves contrary evidence, rather than arguing against it.

That was my first thought, that something ain’t kosher here. If this guy has truly predicted every election since 1912, excepting 1960, he’d be a political rock star seen constantly on every cable TV news show.

“The projections for Clinton are all based on opinion polls, which are flawed because they don’t reflect actions, Norpoth wrote. They’re about what voters think of Clinton or Trump, but they can’t tell us exactly how voters will act on those thoughts.”

I hope he’s right, but how is this different from any other year?

Zachriel above calls it postdiction. I think that the corresponding term in investing is ‘backtesting.’ Backtesting is largely bogus, maybe completely bogus, so I suspect that postdiction is the same.

Aleister, respectfully, I hope you can improve your work. I’ve come to expect better than this from LI posters.

Make no mistake what the deplorables’ movement is all about…on November 8th…Trump supporters, many of whom did not vote in 2012 or have never voted before, will come out to vote and descend on the Clintons like an Avalanche.

from your keyboard to G_D’s ears ….

Unfortunately, not only will many ‘deploreables’ vote for the first time but also aliens both legal and illegal as well as the zombie vote.

It’s all about turnout.

Actual early voting and Absentee mail-in ballots show that blacks are not turning out for Hillary in the numbers they did for Obama. (anyone surprised?) And, Republicans are showing up in much greater numbers than for Romney or McCain.

Actually the reports I have read, are mixed. Requests for absentee ballots and early voters by democrats are up in NC and down in OH. Who needs to win them both? Who only needs one?

The guy is partly right, the polls can and should be dismissed. At the very least they cannot be taken seriously. Well, maybe you can take them “seriously” as in a “serious attempt to influence public opinion and voter turnout”; a fraud.

On the other hand, while the statistical model that he’s using maybe a better tool, the truth is that at this point nobody has a clue. Nobody knows who’s going to win.
You can stamp 99.99% certainty on THAT.

Don’t put the word on this out there now!! It will make the Democrats cheat even harder!

There’s nothing scientifically or mathematically bogus about calibrating a model to fit prior elections. If honestly done, and not loaded up with ad-hoc features to emphasize what you want it to show (like, say, a “hockey stick” trend in global atmospheric temperatures), it’s a sound technique for making short-term predictions.

And he’s right, the polls are crap, for many reasons. For one, reports of raw poll data, even if honest, are useless if they haven’t been calibrated against prior elections (see above). One of the obvious calibration problems is that the poll questions have to have some relevance. But it’s not clear that these polls do—they ask the wrong questions; they ask about voter approval, which is of no real interest. I haven’t approved of any candidate I’ve ever voted for (they’re all turkeys at best, bums at worst), but I voted for them anyway. And the sampling and counting errors in the published polls are grotesque, and anyone who didn’t sleep through Statistics 101 can spot them immediately—and although those people are only a small subset of the population, the errors remain and are very real.

The problem I see is that this sort of model can’t account for any new factors. The “Let’s Make History!” factor can’t be included, since none of the elections used to calibrate the model involved a woman as a major Presidential candidate. So the data just isn’t there. And it can’t account for old factors which have changed radically in magnitude. Voter fraud has existed as long as we’ve had elections, and is therefore included in the model. But my suspicion is that the Dems are going to pull out all the stops this time, and voter fraud will be a far more important factor than it has been at any time since 1870 (though the 1870 election was not at all like this one; the only similarity is the suspected dominance of fraud). Without fraud, I expect a landslide for Trump; but with fraud, I have no way to tell. The Dems have been at it a long time; they’re probably pretty good at it by now. The perversions they’ve introduced into American government and society to maintain a thriving and robust voter fraud industry are almost as great as those they championed two centuries ago to preserve—and expand—their Peculiar Institution.

Actually, they usually ask “for whom would you vote?”
http://assets.bwbx.io/documents/users/iqjWHBFdfxIU/rpooBV0UlG4k/v0

tom swift: the sampling and counting errors in the published polls are grotesque, and anyone who didn’t sleep through Statistics 101 can spot them immediately—and although those people are only a small subset of the population, the errors remain and are very real.

What sampling and counting errors are those?

Romney and Trump both cited skewed polls and the size of the crowds at their rallies as reasons why the polls were wrong. So did Michael Dukakis in 1988.

Direct quotes attributed to Dukakis from the article:
”I smell victory in the air, don’t you?”
”Something is happening,” he told Paul Brountas, his friend and campaign chairman. ”We’re moving.”

He lost the popular vote by 9%. Bush got 426 electoral college votes. Dukakis got 111. It was a bloodbath. Just as the polls predicted.

They’ve already started the “nothing to see here, move along” campaign to cover voter fraud. Yep, these guys are pros, all right. The government story (that is, the Democratic story) is that any evidence you may read exposing voter fraud is a plant by those rascally Russians.

It’s brilliant—it doesn’t matter how blatant the fraud is or how obvious the evidence, they’ll claim that that’s just a sign that those Russian hackers are too unsophisticated to do a more convincing job.

Of course, not a shred of actual evidence has been offered to show that any Russian agency has anything at all to do with any of the leaks. The “evidence” so far is nothing at all; but they’re counting on the “man in the street” to not know that. Nobody who’s set up web sites, managed web accounts, who knows what a proxy server is and how to use it, knows how static and dynamic Internet Protocol addresses work, etc, would be fooled by this. But, although that’s a considerable number of people, it’s still a tiny minority of the population.

This prediction traces at least as far back as February and no words change. So someone keeps pumping it back into the news stream and all the Trump supporting websites grab it. Has anyone ever heard of this marvelous predictor before 2016?