“This procedure is very similar to sucking the seeds out of a papaya!” 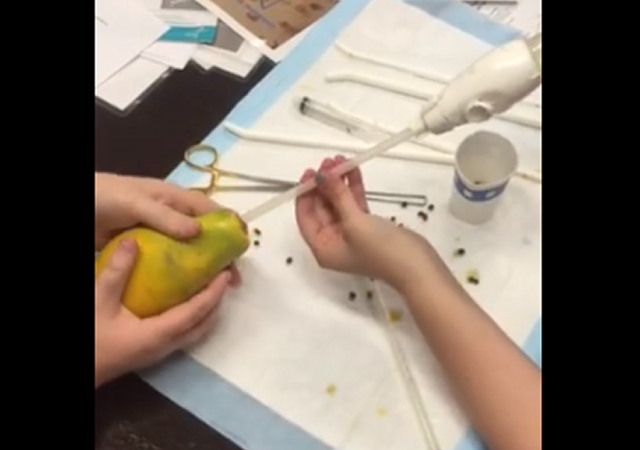 In addition to the sick moral equivalence of comparing a human fetus to a piece of fruit, the teachings of the Catholic Church are pretty clear on the issue of abortion.

An unofficial abortion-rights group at a Catholic university hosted a “papaya workshop” last month that showed students how to perform abortions using a tropical fruit.

Students laughed as a Loyola University Chicago medical student apparently guided another student through a mock abortion, as seen in video posted by Students for Reproductive Justice on Facebook.

“Ooh!” the student exclaims as a papaya seed gets sucked into the tube. Several more seeds are visible on the table in the video – previous “abortions.”

Aspiration abortion uses suction to end a pregnancy up to 10 weeks, and it’s “very similar to sucking the seeds out of a papaya!” the Facebook post reads.

The workshop’s goal was to “destigmatize abortion in general” and show that it’s a “simple medical procedure.” Another mock-abortion workshop is scheduled for next semester.

Students for Reproductive Justice isn’t just giving students a preview of their future careers in abortion. It’s showing them how to lobby for policy change, recently convincing the Loyola administration to remove pro-life resources from the campus Wellness Center.

Its next goal: getting the Catholic university to provide free abortion pills on campus.

This is how Students for Reproductive Justice described the event on Facebook:

The papaya workshop was a success! Special thanks to Midwest Access Project for putting the workshop together and supplying everything, Chicago Women’s Health Center for allowing us to use their space, Bedsider for funding the event, and especially to Natasha, a medical student at Loyola, for instructing us.

The purpose of the papaya workshop is for students to learn about aspiration abortions, and to destigmatize abortion in general. Abortion is a simple medical procedure. Up to 10 weeks, this procedure is very similar to sucking the seeds out of a papaya!

The left thinks nothing of advancing their agenda in places where the very foundation of the institution conflicts with their views but the opposite is never true.

Try to imagine a workshop on how to obtain a gun license would go over at a school like Oberlin or Berkeley.

Do you think it would even be allowed?

A human embryo is larger than a papaya seed after the first month. The overwhelming majority of abortions are performed much later.

Outsource Planned Parenthood to run capital punishment so that the very same methods they use are not unusual nor considered by the elite as cruel.

We live in very sick times.

Normalizing the final solution through debasement of unwanted and inconvenient human lives… for wealth, pleasure, leisure, and narcissistic indulgence. To ensure women remain taxable and serviceable commodities, and exploited for democratic leverage. Then there is Planned Parenthood et al… Who wants to live forever?

A progressive process to excise Posterity from the Constitution, then disarming, depriving wholly innocent human lives of their voice and life. Selective-child is notably a greater threat to civilization, and moral development, than one-child by virtue of its diverse (i.e. numerical) support.

The anthropomorphization of the evolutionary process and establishment of a Pro-Choice Church have set the stage for the greatest setback of human development.

A human life begins at conception. Any other belief is fantasy or an article of faith.

That said, whether by choice or force, there will be a reconciliation of moral, natural, and personal imperatives.

So…when they trot-out the “back alley abortions” nonsense, we will now know they are just FOS and ignore them since it just like sucking the seeds out of a papaya. Right?

OMG. They forced students to touch a papaya’s lady parts!

Somebody must have sucked the brains out of these kids already. Why they so easily believe anything the media or academia tell them.

A human embryo has a beating heart by four weeks gestation.

So what’s next: mock concentration camps, replete with medical experiments?

Or maybe an intermediary step: mock re-education camps. They could use watermelons to practice cracking open internees’ skulls.

We are on the precipice. Heil Hillary.

I see no problem with this demonstration. It’s a reasonable effort for people to convince others of their views. What does bother me is that an analagous demonstration by the other side might not be allowed on many campuses. That is, something showing the reality of an abortion — how bloody it is and how human the fetus is..

Why not invite the class for a field trip to a partial birth abortion?

Loyola used to be a Catholic school.

Yes, and the Catholic Church used to be Catholic.

“Exorcist Writer Gets Response From Holy See on Georgetown Petition (42908)

The Vatican describes the petition as a “well-founded complaint” and says it will work with the Jesuits to address the issues, stirring hope and skepticism.

…WASHINGTON — Last September, William Peter Blatty, the author of The Exorcist and an alumnus of Georgetown University, sent a canonical petition to the Vatican, requesting that the Church ‘require that Georgetown implement Ex Corde Ecclesiae, a papal constitution governing Catholic colleges.’

If that effort proved fruitless, his petition called for ‘the removal or suspension of top-ranked Georgetown’s right to call itself Catholic and Jesuit in any of its representations.’…”

“Is the Pope Catholic?” is not longer the obvious rhetorical question it used to be.

The challenge here is that these SJWs will demand that a Catholic University violate its fundamental morality and teachings. And, given the current climate in academia, the University will find a way to justify it.

If these kids want to attend a secular university, they should feel free — heck, public universities are going to be cheaper to attend. But if they go to a private, religion-affiliated university, they have to understand that they may have to play by what may be different rules. Unfortunately, no one seems to have let them know that.

Next up: Students demand that Loyola remove “Ad Majorem Dei Gloriam” because it is offensive and paternalistic (the Latin has God as masculine — and then there’s that whole “God” thing). The only thing preventing this is that none of them are smart enough to read Latin.