Look for the union label. 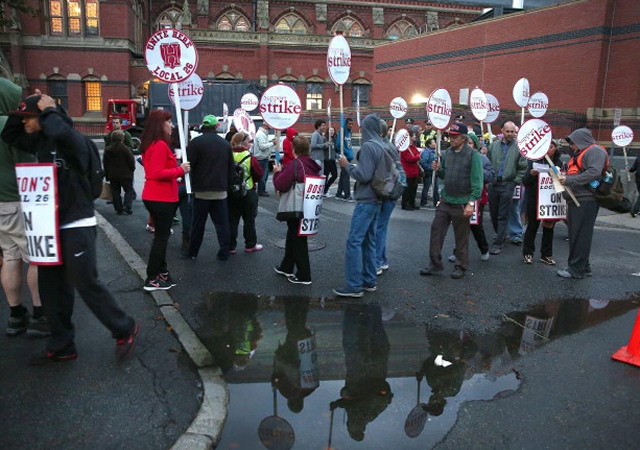 How long will it take for the $35K to be ratcheted up to an annual salary of $40K or $45K? These are college cafeteria jobs.

After months of tense contract negotiations, Harvard will pay its full-time dining services employees at least $35,000 a year and cover increased copayments until 2021—a settlement that union leaders say satisfy their demands.

The agreement was ratified 573-1 by dining services employees at a vote Wednesday afternoon, marking the conclusion of a 22-day strike that has rocked Harvard’s campus and led to the closing of several dining halls and campus cafes. HUDS employees will return to work Thursday morning, though “normal operations” will not resume immediately, according to University spokesperson Tania deLuzuriaga.

A press release sent Wednesday from UNITE HERE LOCAL 26—the union that represents HUDS—said employees would not see any increases to their out-of-pocket healthcare costs with the contract, which will last five years.The settlement also includes the creation of a Diversity and Equality Committee to “address concerns regarding diversity and equal treatment of Harvard dining hall employees” and retroactive wage increases of 2.5 percent per year—just slightly below the wage increases Harvard’s largest union, the Harvard Union of Clerical and Technical workers settled last winter.

That’s not $20 an hour! Where is all that living wage talk now?