And it’s being used against him 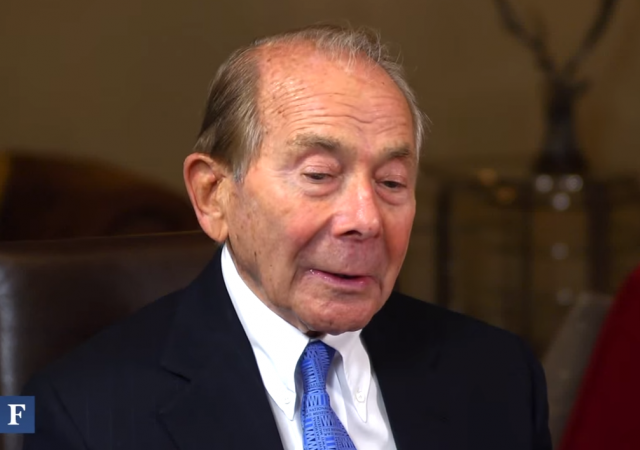 The New York State Attorney General’s office has been on an over 10 year long jihad against former AIG CEO Maurice “Hank” Greenberg over alleged accounting fraud.

Though he now is age 90, Greenberg continues to fight

Standing on principle may be partly generational. Mr. Greenberg is one of a dwindling number of “the Greatest Generation,” as Tom Brokaw called World War II veterans who grew up during the Depression and fought “because it was the right thing to do.” Mr. Greenberg spent much of his childhood on a small farm in an impoverished area of the Catskills near Liberty, N.Y. His father died when he was 6, and his mother worked as a manicurist. At age 17, he dropped out of high school and lied about his age to enlist in the Army, where he learned “discipline, focus and loyalty,” Mr. Brokaw wrote in his 1998 best seller.

The ongoing trial has the bizzarre aspect that the AG’s office is trying to use Greenberg’s military service against him by claiming that the military precision with which he ran the company made him culpable for the acts of underlings. The Wall Street Journal reports:

The first weeks of Hank Greenberg’s trial suggest that, 11 years after then-New York Attorney General Eliot Spitzer cried fraud and drove Mr. Greenberg out as CEO of AIG, prosecutors are still struggling to make a case.

The New York Attorney General’s office has been overruled on efforts to introduce hearsay evidence, as well as material irrelevant to the case. Prosecutors also struck out when they tried to have a lay witness offer opinions, a legal privilege reserved for experts. Without direct evidence that Mr. Greenberg committed fraud or told anyone to do so, the prosecution is attempting to make a circumstantial case that he was a control freak who therefore must have been responsible if anything improper occurred.

To buttress this narrative, the AG’s office has pointed to excerpts from a corporate memoir Mr. Greenberg co-authored in 2013. “Many of AIG’s senior managers were former U.S. military officers,” Mr. Greenberg and Lawrence Cunningham wrote. “The command-and-control hierarchy of military discipline, loyalty, and organization became part of AIG’s culture. Managers and employees assumed that corporate directives would be followed.”

What a destructive precedent it would set if courts decide that running a disciplined organization counts as evidence of complicity in allegedly illegal acts, whereas lax management is a liability shield on the assumption that weak executives don’t recognize wrongdoing.

In the course of the non-jury trial, the following sequence revealed that Greenberg remembers the precise date on which he visited Europe over 70 years ago:

The court: I have one question or a couple of questions to ask Mr. Greenberg. You said you visited Europe from England. Was that in 1944?

The court: Do you recall the month?

The court: You wouldn’t recall the day; would you?

That would be D-Day.

A note to the youngsters prosecuting Mr. Greenberg: That was D-Day. We’re guessing that the young staff sergeant who landed on Omaha Beach never dreamed that his military service would be used 72 years later as evidence against him. He probably had other things on his mind.

Tom Brokaw called World War II veterans who grew up during the Depression and fought “because it was the right thing to do.”

As a historical Point of Order, note that the US instituted a Selective Service program in 1940, when the country was not at war with anybody. Over ten million men were “inducted” during the war; the historical record fails to show that any of the four thousand Selective Service boards asked a single one of these men if they thought any of this was “the right thing to do.”

To clarify, “inducted” means taken by one or another of the Services, not necessarily “selected”, which is officialese for “drafted”.

Like many soldiers during WWII, Hank Green wasn’t drafted. He lied about his age and enlisted in the Army…

And your point is what?

“…a historical Point of Order…”

Some Americans feel it is their patriotic duty to denigrate veterans whenever possible.

Seems to me that those brave men did the right thing, rather than fleeing to Canada.

This is one of those stories that illustrate why we should be so grateful…and make it known we are…when we have good, ethical, careful prosecutors.

The AG should be put up on some type of legal contempt – 11 years and NO CASE?!

The man deserves a medal (and probably has several) – not this!

It was in all the papers…

If you think back……there was not one Japanese aircraft that got past Tulsa.

The court: And can you tell me, Mr. Greenberg, did you and your friends go to the beach that summer afternoon?

The prosecution is demonstrating a superficial grasp of the American military and how it works. Apparently, they’ve never heard of “taking the initiative.” This happens when junior officers or NCOs take advantage of an immediate tactical situation without waiting for orders – a wait that can result in the loss of opportunity. No matter how structured Mr. Greenberg’s outfit may have been, if it was really run like an American military organization, it is very possible that things happened of which he was not aware, due to the initiative of junior officers taking advantage of developing situations. The prosecution is presenting a false view of American military culture, or at least a false view of that culture as it existed in WW II

Any jury of Greenberg’s peers, and by that I mean anyone who has ever served and has experienced such “military precision,” would laugh that out of court.

Hopefully the NY AG will learn about military when someone does Mark Time, Mark on his sorry ass.

I think the headline to this post is wrong. The prosecution is not using Greenberg’s memory from WWII against him. Those questions were asked by the judge. It sounds like Greenberg underplayed the fact that he was involved in D-Day and just said that he visited Europe by way of England in 1944. The judge picked up on and asked the follow up questions so that the jury would know that Greenberg participated in D-Day. Fair follow up by the judge (maybe pushing the envelope a bit) but I’ll bet the prosecutors were seething. Seems pretty clear that the judge is skeptical of the prosecution’s case and wants to make sure the trial is fair.

This is a bench trial. No jury.

In that case, the judge was definitely sending a message to the prosecution.