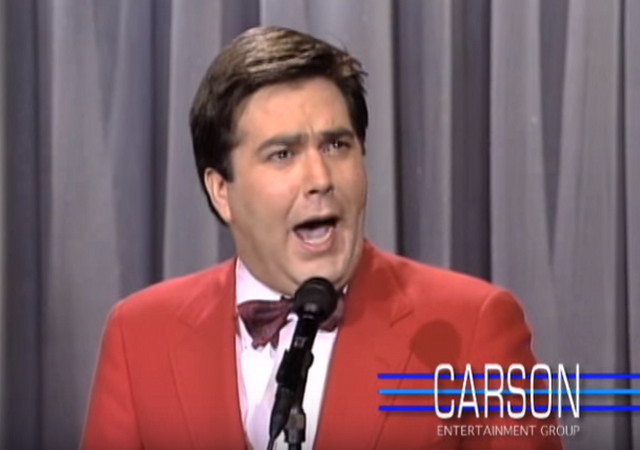 Anyone who enjoyed stand-up comedy in the 80’s and 90’s will certainly remember Kevin Meaney whose routine usually revolved around his parents protesting his jokes by saying “that’s not right” and warning him “we’ll lose the house.”

Meaney passed away Saturday at the age of 60. At the time of this writing, the cause of death hasn’t been determined.

Kevin Meaney, a veteran stand-up comedian and actor, has died. He was 60. Meaney’s agent confirmed that he was found in his home in Forestburgh, N.Y., and that an autopsy is pending.

“Kevin Meaney was as funny as they get and the nicest man,” Apatow tweeted. “He could make you lose your mind laughing.”

Meaney was a stand-up comedian for more than 25 years, with his first HBO special airing in 1986, according to his website. Since then, he has appeared on The Tonight Show Starring Johnny Carson, Late Show With David Letterman, Oprah and Late Night With Conan O’Brien.

He appeared on the 1990 sitcom Uncle Buck as well as the Tom Hanks film Big.

I’ve found two good clips of Meaney’s work you can watch below. If you don’t know his work, you’ll still get a kick out of these videos. Meaney dealt with tame subject matters. It was all about his delivery.

Here he is on the Tonight Show with Johnny Carson in 1989:

Prayers to his family and friends.

Rest in peace, Kevin. Thank you for the laughs.

There’s a name I’ve not heard for a long time. Kevin Meaney was quite a talent and could get some good, hearty belly-laughs a-goin’ that’s for sure. Prayers for the repose of his soul and comfort for all his loved ones.

In remembrance, “Kevin Meaney does ‘We Are the World'”:
https://www.youtube.com/watch?v=H1MEwm-o4fQ&feature=youtu.be

Sorry to hear this. Always enjoyed his sets. He seemed like a good guy. RIP.

Earlier today (Sunday, October 23rd), I had been having some trouble with my Internet connection. Things would load very slowly, or not at all, or would load, then need to be “recovered”. It took me nearly 45 minutes just to finally be able to read an article online.

In the midst of this, I had one “tab” trying to open The American Thinker website. It had “americanthinker.com” in the url box, but for some reason it just wouldn’t open. When I switched to that tab (from another that also was not working well), I saw that the website was STILL not opened, even though the website’s url was listed in the url box. I said to myself (and I’m not making this up), “That’s not right”, and then decided to instead try to visit Legal Insurrection from that tab instead. So I typed in their name, and their website opened fairly quickly. The first article to appear (at that time) was this one, about Kevin Meaney’s death.

I remember seeing Kevin Meaney a few times, and had thought he was fairly funny. But I never would have associated him with the line, “That’s not right”. And I didn’t remember his name offhand. (I have associated “That’s not right” with “Galaxy Quest” for years [ https://www.youtube.com/watch?v=akTCiwEa59g ]. I imagine they were paying some homage to Kevin Meaney with that line in the movie.)

And I just found out that Kevin Meaney was gay. Truly, that’s not right.

Dying is easy; comedy is hard.

I have a large responsibility. I’ve told my younger staff to “go put your big pants on. We’re big pants people” so many times I can’t count them. They’ve never known where this comes from. Thanks for the clips. I will show them to the guys. Thank you Mr. Meaney.