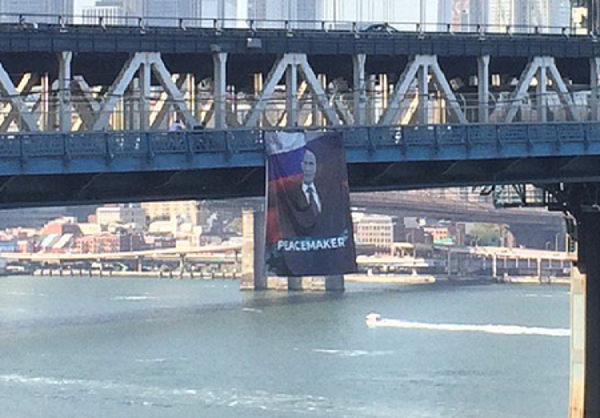 A massive banner depicting Russian president Vladimir Putin against the backdrop of a Russian flag and bearing the word “Peacemaker” was draped down the side of Manhattan Bridge on Thursday.  It hung there for a little over an hour before police removed it.

A giant poster of Russian President Vladimir Putin was draped along the side of the Manhattan Bridge on Thursday afternoon.

The massive banner featured the Russian leader in a suit and tie against the backdrop of the country’s flag along with the word “peacemaker” emblazoned at the bottom.

“We were just at our desks, we have some large windows from our office and we just saw it going up,” Quinn Formel, 27, whose office building in Dumbo faces the Manhattan Bridge, told The Post.

“These two guys … they were struggling for a little bit, but eventually got it [the banner] up,” he said.

. . . . The NYPD received a 911 call about the approximately 20-by-30-foot banner hanging above Adams Street and John Street in Brooklyn around 2:30 p.m., a police spokesman said.

Twitter users posted photos of the banner before it was removed.

This just dropped on the Manhattan Bridge. Living in some weird and scary times. pic.twitter.com/ry9XvxBYcW

This stunt was probably performed purely for Russian domestic consumption.

So here’s a question for you, Edge, given your first-hand knowledge: Would something like this be peddled as some sign that Americans are looking to Putin to be a “peacemaker”? Some kind of propaganda selling Americans as pro-Putin? I’m just curious how something like this would play out in the Russian media.