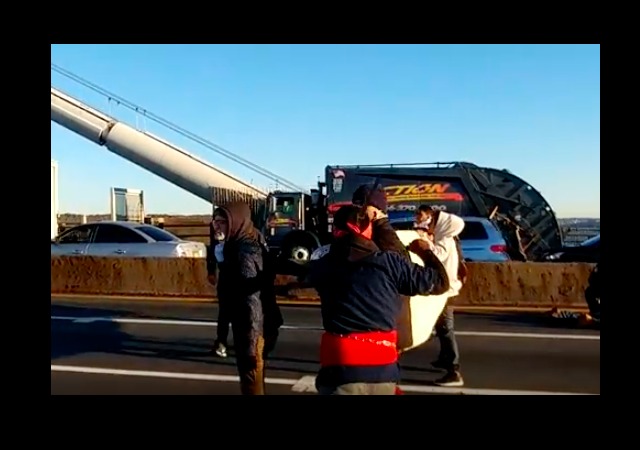 The Laundry Workers Center, an organization that wants to improve the living and working conditions of those in the laundry and food industries, put on the protest. Yeah, because nothing screams safety like chaining yourselves to each other on a busy NYC bridge.

Of course they faced anger from those trying to drive into the city since the protestors caused more congestion than the drivers already face:

“Get the f— out of the road, are you f—–g kidding me?” one man is seen yelling at the protesters.

“Get the hell out of here, you want to go protest, protest on your own time,” another man said.

NJ.com reported that the protestors demanded “equal rights for immigrants” and “political power for marginalized communities.”

But blocking traffic goes way beyond making people late for work or school. As Professor Jacobson pointed out in March, these types of protests prevent emergency vehicles from getting through. In one anti-Israel protest, a car with a distressed child could not get through for treatment.

How to win friends and influence people. /s

Hit ’em with a fire hose, then drag their illegal butts to jail!

Better plan: Handcuff them and throw them OFF the side of the bridge. No more protester.

Being very familiar with the GWB, deliberately making things worse should be a felony punishable with serious prison time. (That includes Christie’s cronies)

Too nice. The police is too nice.
These people need to be taught a lesson. A tire iron to the knee will probably do the job.

And I’m sorry, but I don’t count keeping me trapped in my car for hours as peaceful.

As a Trump supporter I would like to thank these people for making his case.

A small minority wanting to appear to be larger in numbers, willing to do so by violence means.

They need to be met head-on, or we’ll be governed by them. But don’t look to the Crying Boehners for help.

You should have also linked to the article discussing when “run them down” is a justified response.

This constitutes false imprisonment. If I were at the front of the traffic jam, I would seriously consider driving through the illegal barrier, even if the barrier is made of flesh and bones.

Unfortunately probably not. From the “New York Litigation Guide”

A plaintiff asserting a common-law claim for false imprisonment must establish:

Here, the definition of “confinement” might be at issue.
– the “intent” of the protesters wasn’t to “confine” the drivers, but was to “stop traffic” on the bridge. The drivers, at any time, were free to escape their vehicles and proceed on foot across the bridge (yes, I realize it would have collateral consequences regarding the property interest in their vehicles, but the criminal court isn’t going to look that deeply, and even if they DO, they’re likely to be overturned on appeal.

The Civil Courts are going to say “Could you have proceeded on foot? Yes? Case dismissed, you weren’t ‘confined.'”

Also, the definition of “consent” might be at issue. By “choosing” to stay in their car, are they implicitly consenting to remain?

What the New York Legislature REALLY needs to do is make it a private attorney-general action to civilly sue any person blocking a bridge, as well as making it it’s own criminal action.

Then make the remedies available to the inconvenienced person include court-costs, attorney’s fees and make any judgment thereon not subject to any exemption law from satisfying the judgment. Literally take EVERYTHING from a couple of these morons, and the rest will get the memo REAL quick.

In AZ deliberately blocking a roadway is included in the crime of kidnapping and can be resisted with deadly force. Render them unconscious and leave them beside the road.

Naa, they’re probably all citizens. Sane illegals tend not to engage in activity that is certain to end in arrest, due to the higher probability of winding up back in the country they didn’t want to be in. (even in the current administration)

However, they should be arrested, charged, held until bail is paid, taken to court, fined severely, and put on probation. Actions have consequences. If you don’t want to do the time, don’t stand out in the middle of traffic.

Officer I don’t know what happened? Guess my brakes failed?

It does make sense by a twisted sort of logic: liberal knot-heads protest the “plight” of illegal aliens by protesting the same by an illegal action on a busy bridge … that coincidentally put hundreds, perhaps thousands, including themselves, in serious danger.

Yep, Liberal Logic 101 in action! Saul Alinsky would be so proud.

Great way to set up a terrorist attack. Demonstrators chain themselves across highway or bridge. Bring all traffic to a halt, wait for the police, rescue and news to show up and set off car/truck bomb. Wait for second responders set off vests. Ultimate soft target, it would be fishing in a barrel with explosives. Even better if they do it to an under water tunnel like the Sumner or Ted Williams in Boston. The build quality of those tunnels are questionable at times.

Just curious, from a legal perspective re free speech.

What happens if somebody decides to counter-protest by piping in the sounds of gunshots and screams over a PA system?

The drivers now have a “reasonable” fear of lethal violence to justify running down the protest line.

More of your malevolent magic thinking.

These border jumpers are getting too cocky. They are offering themselves up for arrest and deportation. Take advantage of it. Trump show everyone how to clean this shit up quick.

I assume these people will get the same treatment as Chris Christi wrt bridge blocking.

New Law: they can only protest while standing in a pot hole. At least then these people will serve a useful purpose.