Wikileaks released another batch of emails belonging to Clinton campaign chairman John Podesta, some of which tells about drama within the Clinton Foundation and limiting the usage of Bill due to his sexual history. In one disturbing chain, Doug Band, a lawyer who helped form the Clinton Foundation and former aide to President Bill Clinton, wrote to Podesta, Hillary aide Cheryl Mills, and aide Justin Cooper about how Bill and Chelsea’s “office crap” almost caused the foundation’s COO to commit suicide:

Band wrote this response to an email from Mills about wanting to know “where things stand in terms of folks feelings and willingness to engage with WJC [William Jefferson Clinton].” She sent them a memo “outlining the creation of a personal office paid for by WJC 100% which acts as the interlocutor for his time regarding engagement with the various entities and serve as advisors to him regarding what and how he does things.”

Band also chastised Chelsea for not caring enough about the foundation or its employees:

The group may have continued the discussion on the phone like Band suggested at the beginning of the email. The next part of the chain only discusses their trip to the Middle East.

But this isn’t the only time Bill’s sex life is mentioned in the email dump. Opinion writer Brent Budowsky wrote to Podesta about people close to the Clintons telling the media that Bill’s sex life “could be damaging” to Hillary. Budowsky disagrees, but says these people need “to shut the hell up about this.”

Band also expressed other problems with Chelsea, back in 2011. He worked on a memo with Mills and Podesta about his company Teneo and some story that could destroy the company if the media released it. In his response, he goes off on the former First Daughter for causing problems: 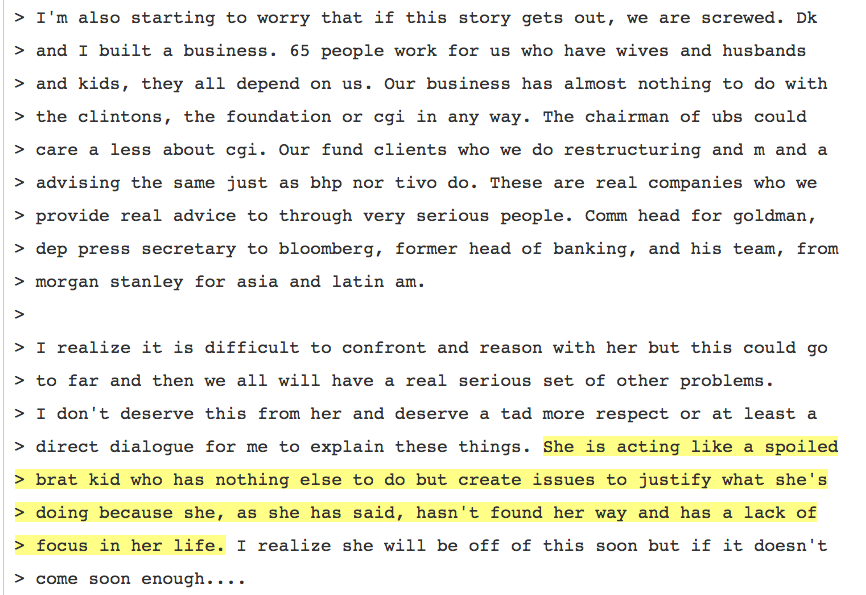 Athletes asking Trump to stop calling it locker room talk, because they’ve never heard it in the locker room.

Well I’ve heard it all the time in locker rooms.
Guess what. I listen to sports radio where the hosts are also sports reporters and over the years they’ve talked about the talk that goes on in pro sports locker rooms and they’ve heard it too.

Almost every guy has been a jerk towards women when talking with another guy in a bragging session. That doesn’t mean he acted on it or even meant it.

It is like a fish story. It gets better or juicier with the telling.

I know I have said some things I regretted over the years that really didn’t happen.

But, this is more crucial, Trump doesn’t have a line of women he has destroyed in order to protect his power or access to his power.

A power mad woman who feels she has to destroy another human being is far more dangerous than a man bragging about his exploits.

Because what she does in private hurts people and they get no ‘due process.’

I am so sick of this politically correct BS that knocks real people out of running for office and keeps the phony ones in.

In fact, I would suggest that be a tweet from Der Donald — “#PoliticallyCorrectness keeps #RealPeople out & elects #PhonyPeople instead”

I think there’s much less concern about Trump’s language among his supporters because they’re adults who understand that both men and women can speak crudely in private about the opposite sex. The only people who are going on about it are people who are already opposed to Trump who think they can do him damage by beating the drum. Meanwhile, Hillary curses like a sailor directly at every low-level employee in sight, and publicly denigrates Bill’s accusers, and that gets largely ignored, if only because anyone who knows Hillary already knows these things about her, so it’s not news.

I dono… those are pretty elite locker rooms they are talking about.

Hillary is using her double vision glasses in this picture.