Pew: Lowest Level of Support for the Death Penalty in Decades

Pew: Lowest Level of Support for the Death Penalty in Decades

Four decades to be exact 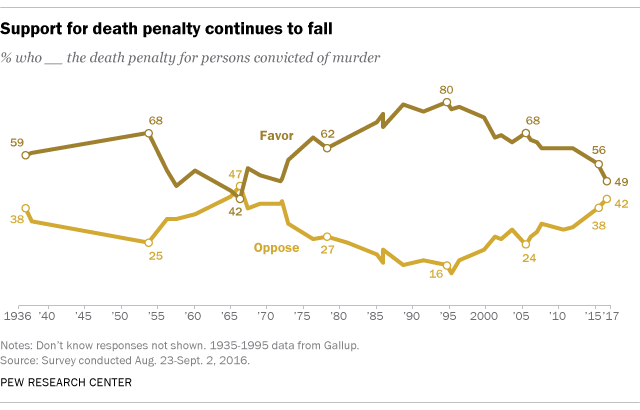 Somewhat surprisingly, only 49% of Americans now support the death penalty for those convicted of murder.  However, 72% of Republicans still support it.

Only about half of Americans (49%) now favor the death penalty for people convicted of murder, while 42% oppose it. Support has dropped 7 percentage points since March 2015, from 56%. Public support for capital punishment peaked in the mid-1990s, when eight-in-ten Americans (80% in 1994) favored the death penalty and fewer than two-in-ten were opposed (16%). Opposition to the death penalty is now the highest it has been since 1972.

Though support for the death penalty has declined across most groups, a Pew Research Center survey conducted Aug. 23-Sept. 2 among 1,201 adults finds that most Republicans continue to largely favor its use in cases of murder, while most Democrats oppose it. By more than two-to-one, more Republicans (72%) than Democrats (34%) currently favor the death penalty.

Two decades ago, when majorities in both parties favored the death penalty, the partisan gap was only 16 percentage points (87% of Republicans vs. 71% of Democrats).

And, for the first time in decades, independents are as likely to oppose the use of the death penalty (45%) as they are to favor it (44%). The share of independents who support capital punishment has fallen 13 points since last year (from 57%).