“Let the rich pay for the crisis.” 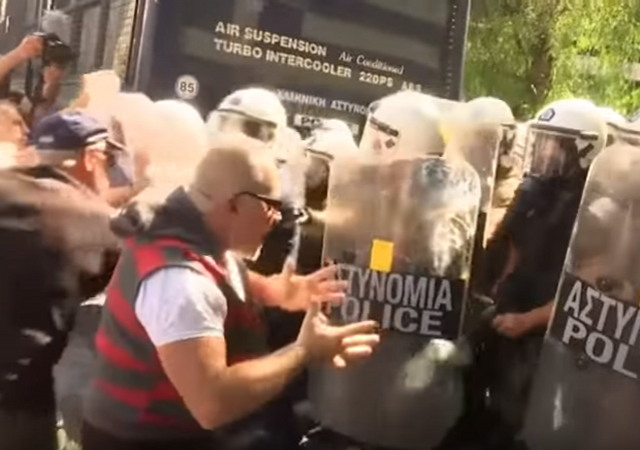 It looks like putting the left wing Syriza Party in control of Greece hasn’t changed much. The country is still broke, still struggling to make cuts and there is still unrest. In fact, recent pension cuts nearly led to rioting.

Greek police on Monday fired pepper spray at pensioners protesting against cuts in their state income.

Thousands of pensioners responded to a protest call by the communist opposition and tensions increased as their protest march approached the prime minister’s residence.

One group of protesters attempted to breach the cordon of riot police guarding the building, while others attempted to overturn a police car, according to an AFP correspondent.

Police responded with a limited amount of pepper spray, but protesters returned before being dispersed.

Nikos Toska, minister for citizens’ protection, took responsibility for the use of the gas irritant and announced a ban on “all use of tear gas on protests by pensioners and workers”.

The leftist Syriza party of Prime Minister Alexis Tsipras, when it was in opposition, regularly decried the use of tear gas on protesters.

Its use was widespread during anti-austerity protests at the beginning of the decade, to the point of affecting whole neighbourhoods of the Greek capital.

The elderly protesters on Monday shouted slogans such as “We can’t live on 400 euros ($450)” and “Let the rich pay for the crisis”.

This is what it looks like when almost everyone works for the government and gets a pension when they retire at age 55. The government runs out of money and you eventually get this:

The New York Times has more:

Greece’s left-wing government has imposed new cuts on pensions this year as part of its bailout commitments to international lenders, with the International Monetary Fund pressing for tougher measures.

The latest round of cuts follows six years of bailout-related austerity measures, while nearly a quarter of Greeks remain unemployed and no longer eligible for state benefits.

“This is a fight for our life. The country has been driven to desperation,” pension protest organizer Dimos Koumbouris told the Associated Press.

…coming to a town VERY near you…

And NOBODY is even talking about it that’s running for POTUS.

Geezers do not seem to make very effective rioters. The optics of protest so often teeter on the edge of ludicrous. I can envision a phalynx of electric mobility scooters approaching the line of the riot police. Slowly. Ever so slowly…

Poor Greece is done. The EU will not bail them out because other countries would fall like dominoes. And, there are not enough Euros to go around.

Meanwhile – Greece imports 90% of their food and 100% of their energy. They cannot default because no one would lend them more money to buy food. With no travel restrictions – 5 million Greek refugees would overwhelm the EU.

So poor Greece is just going to suffer.

Old people trying to turn over a police car? Was that is a Buster Keeton movie? 🙂

Don’t let the word “pension” fool you, they have people that retired from government jobs at 38 with full benefits, so we aren’t talking geriatrics.

And that is what the Left wants in America, foolishness, dishonor, disgrace…

The demonstrators have been angered by 15 successive cuts in their pension payments … as part of a massive reform of the retirement system demanded by the country’s EU and IMF creditors.

The overall effect has been cuts of 25-55 per cent to pensions, according to Ika, the largest social security organisation in Greece.

The rich moved their assets or themselves out of Greece probably. They know how to cover their assets.
Amazing how little most of the world knows about simple economics.

So maybe letting people retire at age 35 with full salary and benefits for the rest of their natural lives was a bad idea? Ya don’t say!!!

Getting serious about government employee pensions (putting aside head count and salaries), at all levels, is one-only one-of the steps that will have to be taken here to get on top of our debt problem. Expect civil unrest to follow shutdowns of various services carefully selected to negatively affect the life of some citizen everywhere-rich or poor-in some way: e.g., distribution of direct government payments such as social security, unemployment payments, pensions, armed forces pay; reimbursement of doctor’s fees and medical expenses to provider institutions; distribution of subsidies to school districts; air traffic control; courts; prisons; law enforcement; national parks and recreation; food inspection; border control, customs, and immigration; harbor pilots; and on, and on, and on. Those will happen followed by civil unrest of some sort in various, wide spread places. The alternatives are either financial collapse or selling ourselves to the highest bidder.