If She Knew Anyone at Times Who Was Pro-Life, Don’t You Think She Would Have Said So? 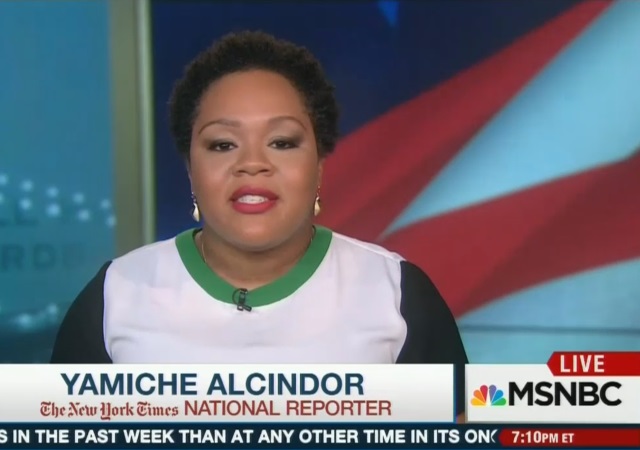 Is anyone at the New York Times pro-life? Times reporter Yamiche Alcindor won’t say. On today’s Hardball, discussion turned to Donald Trump’s charge that the media elites are biased against him. Conservative commentator Hugh Hewitt posited that 90% of the elite Manhattan/Beltway media will be voting for Hillary and applauding her election.

To test Hewitt’s theory, Chris Matthews asked Alcindor whether she knew anybody at the Times who was pro-life. She first responded, “I’m not going to answer that question.” To his credit, Matthews pressed the question, but Alcindor continued to dodge, eventually saying she hadn’t asked any of her co-workers about it. Matthews seemed to conclude that Hewitt’s point had been made.

HUGH HEWITT: 90% plus of Manhattan/Beltway media elites will vote for Hillary Clinton and will applaud her election. That seeps into coverage. It’s what Dan Rather said: news is where you look. Those elites look for news in places other than, for example, the Obamacare premium hikes or the problems at the FBI.

CHRIS MATTHEWS: Do you know anybody, Yamiche, at the New York Times who’s pro-life?

YAMICHE ALCINDOR: [laughs] That’s not a question I’m going to answer. I have no idea.

Wul, duh. IF there were any people at the NYT who WERE pro-life, they DAMN sure wouldn’t noise it around the office!

There’d be hell to pay…

And also this reporter knows just *exactly* what would happen to anybody who she ‘outed’ as pro-life.

And in other news, Lee surrendered to Grant at Appomattox today…

For bonus laughs, ask her to define Conservatism…

If you are Catholic and undecided who to vote for, this video from Rev. Thomas J. Olmsted, the Diocese of Phoenix, should help you with your decision:

I am not a fan of the Catholic Church, but this video touched me.
I highly recommend watching it.

I’m a lapsed Catholic, mainly because of the SJWs disguised as priests and the liberation theology leaning hierarchy.

I’ve sworn now to catch his sermon each Sunday.

Her mother was pro life.

this brought to mind the famous quote by Kael, former film critic of the New Yorker, after the Nixon landslide victory (often claimed to be a fraudulent quote, but here buttressed by an article in the New Yorker itself.

‘Pauline Kael famously commented, after the 1972 Presidential election, “I live in a rather special world. I only know one person who voted for Nixon. Where they are I don’t know. They’re outside my ken. But sometimes when I’m in a theater I can feel them.” ‘

So Yamiche lives in her own special little world too. Probably a safe space with kittens and playdough.

You’re evil if you oppose the Left’s reimagined “final solution” for unwanted, inconvenient, and unworthy lives carried out in abortion chambers (and Planned Parenthood). That and opposition to [class] diversity schemes (e.g. racism, sexism) will have you branded by Twilighters as a “bitter clinger” and shunned from liberal society.

Pro-Choice is selective and opportunistic, unprincipled and unpredictable.