Taking their ball and going home… 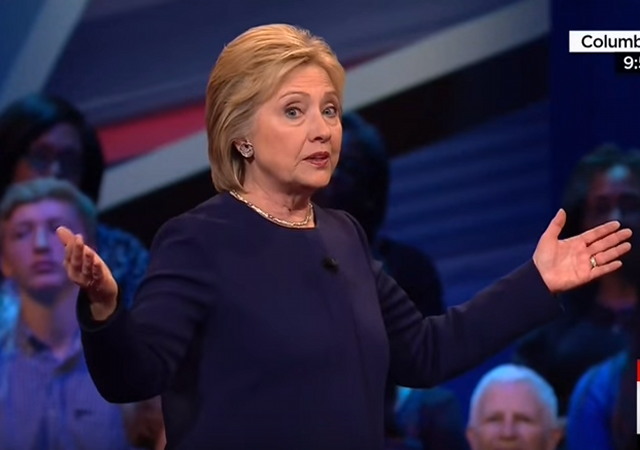 Hillary Clinton is lagging in the usually must-win state of Ohio and as a result, the New York Times has decided that Ohio just isn’t as important as it used to be.

Ohio, Long a Bellwether, Is Fading on the Electoral Map

After decades as one of America’s most reliable political bellwethers, an inevitable presidential battleground that closely mirrored the mood and makeup of the country, Ohio is suddenly fading in importance this year.

Hillary Clinton has not been to the state since Labor Day, and her aides said Thursday that she would not be back until next week, after a monthlong absence, effectively acknowledging how difficult they think it will be to defeat Donald J. Trump here. Ohio has not fallen into step with the demographic changes transforming the United States, growing older, whiter and less educated than the nation at large.

And the two parties have made strikingly different wagers about how to win the White House in this election: Mr. Trump, the Republican nominee, is relying on a demographic coalition that, while well tailored for Ohio even in the state’s Democratic strongholds, leaves him vulnerable in the more diverse parts of the country where Mrs. Clinton is spending most of her time.

It is a jarring change for political veterans here, who relish being at the center of the country’s presidential races: Because of newer battleground states, Mrs. Clinton can amass the 270 electoral votes required to win even if she loses Ohio.

So basically, Ohio no longer matters because Trump is leading there and Hillary doesn’t need it to win anyway.

At the time of this writing, Trump has a two point lead in Ohio, according to the Real Clear Politics average of polls.

When it comes to Ohio, nothing has gone the way the New York Times wanted. You may recall that they threw their weight behind John Kasich during the Republican primary back in January.

In an editorial, they wrote:

A Chance to Reset the Republican Race

Gov. John Kasich of Ohio, though a distinct underdog, is the only plausible choice for Republicans tired of the extremism and inexperience on display in this race. And Mr. Kasich is no moderate. As governor, he’s gone after public-sector unions, fought to limit abortion rights and opposed same-sex marriage.

Still, as a veteran of partisan fights and bipartisan deals during nearly two decades in the House, he has been capable of compromise and believes in the ability of government to improve lives. He favors a path to legalization for undocumented immigrants, and he speaks of government’s duty to protect the poor, the mentally ill and others “in the shadows.” While Republicans in Congress tried more than 60 times to kill Obamacare, Mr. Kasich did an end-run around Ohio’s Republican Legislature to secure a $13 billion Medicaid expansion to cover more people in his state.

Do you think the New York Times would be dismissing Ohio if Hillary was leading there?

The NYT has proven beyond a shadow of a doubt time after time that they are nothing but a highly partisan propaganda machine.

The Gray Lady is full of liars and shills for Crooked Hillary!

“So basically, Ohio no longer matters because Trump is leading there and Hillary doesn’t need it to win anyway.”

“The Gray Lady is full of liars and shills for Crooked Hillary!”

Well, yes, but any more than lies and shilling for Crooked Donald?

Is a two percent lead in Ohio “winning”, or is it a dead heat statistically?

In an election that T-rump shills keep telling everyone is breaking all the norms, why is it hard to accept that Ohio is no longer the bellwether it was?

Is there a way to win without Ohio? Yes or no, please.

Here is something you might want to try… stay on the subject of this thread!

You and all the #neverTrump fools just don’t get it!

I thought the subject was the lies and shilling.

You need therapy. Or to lose your anonymity.

Either would make you more civilized here.

Nope. You’re wrong. I’d tell you to get stuffed to your face.

What would you do if you knew my name?

Ever since his boy Ted jumped the fence into Trump’s camp, Hillary’s rags has been more open in his defence of the Hildabeast. Even a slightly pro-Trump story is met with a pro-Clinton attack from him. Now the self proclaimed champion of conservative values is defending the lies of the NYT. Soon they will be touring together, ‘Hillary’s Rags / Times Band’. Don’t buy the album – it sux. And it only plays from the left speaker.

VAPigman, ever the ThoughtPolicing Goon. Ever the defender of lying and shilling.

And ever the defender of the Collective against conservatives.

I see down-thumbs from the discomforted, but no answers.

We all know about NYT, but WSJ and USA Today endorsing her? And AZ Republic (which got death threats after their endorsement)?

To be perfectly accurate, USAToday did not endorse Hellary.

After the display put on by Lester Holt at the debate, and the media’s attempt to play down Hilary’s ongoing health problems; why would any thinking human being believe anything they have to say?

In all honesty, that’s a kind of odd thing to say. I mean, really, if you EVER follow the media, then you KNOW they lie.

You know this. It didn’t take this to convince you. You knew a very short period of time after you began listening and reading them.

I believe them if they say it is raining, right now. The rest of it, nah.

In days gone by, Pravda extolling the virtues of cabbage meant the wheat harvest had failed. Diminishing the value of the “bellwether” State of Ohio means Hillary and the Dems are rewriting their failure. ……with their Pravda surrogates providing paper and ink for the masses. The Fifth column of closet communists that represent the Dem party today were a good long term investment by the old Soviets….the irony is the USSR isn’t around to savor the payoff.

Just because the Times is a propaganda organ for the D’rats doesn’t mean that they’re all totally stupid over there. Nevertheless, I see no useful political insight in this article.

Camp Hillary will pay little attention to Ohio in two cases; either they think it’s a likely loss which no practical amount of campaigning can salvage, OR they believe it’s already in the bag. To determine this they’d look at the polls, and add in what they know but won’t admit; where the dead WW2 vets who were recently registered are going to vote, which precincts can be expected to “find” missing ballot boxes full of Dem votes when needed, which Diebold voting machines have been successfully hacked. Then they add them all together to decide where Hillary should spend her limited conscious “up” time.

Polls themselves are worthless to most of us. They’re something the Party can use to guess where it should spend the most money on ad buys, solicit attack editorials, and parade the candidate about. And they’re of some use when trying to squeeze funds out of big donors. And polls allow the press to push the whole “horserace” thing, which will have to do in place of actual news. But none of it affects actual voters. How someone in Podunk or Peoria is expected to vote doesn’t influence my vote—or anyone else’s—in the least.

Interestingly enough, at one time in the US the candidate did very little campaigning himself. Travel was difficult and slow, and voters were intended to vote for relatively local people they might actually know; that is, the electors. The Party did most of the campaigning. After travel became more practical, the candidates would move about, giving brief speeches from the platforms of their railway carriages. They’d rarely leave the rail line; relatively small crowds were expected to gather there beforehand. Political campaigning everywhere was transformed by Adolf, who was the first major political figure to use those newfangled airplanes. In one day, he could perform the unheard-of feat of appearing at rallies in Berlin, Munich, and Hamburg. (You wouldn’t see anybody like Churchill or Chamberlain or Eden or Halifax gadding about like that.) Now, we expect the Presidential candidate to do the heavyweight campaigning; and we feel a bit gypped if only a lesser entity like the VP candidate shows up. So nowadays, the campaign can only really saturate the amount of territory the candidate can personally cover; and even with the help of TV appearances, that’s spreading any single person pretty thin.

Another historical note: good microphones for voice only began to appear in the early 1920s, and weren’t really perfected until about 1930. Before that, voice amplification was rarely attempted. These newfangled microphones revolutionized dance-hall music—the “crooners” began to get the upper hand over the bellowing required for audible voice in the Jazz Age—and political speechifying, making it possible for a single speaker to harangue huge venues like the Nuremberg rallies.

OK, everyone can wake up now, that’s enough historical reminiscence for a slow weekend.

I see Trump leading OH by 1.8 with all polls taken pre-debate.

Living in Ohio, I must say that I see new Trump signs popping up every single day. Every day there are signs where there weren’t ones before. Since I started noticing 3 weeks back I have seen a total of two Clinton/Kane signs. Two…