Will he be back? 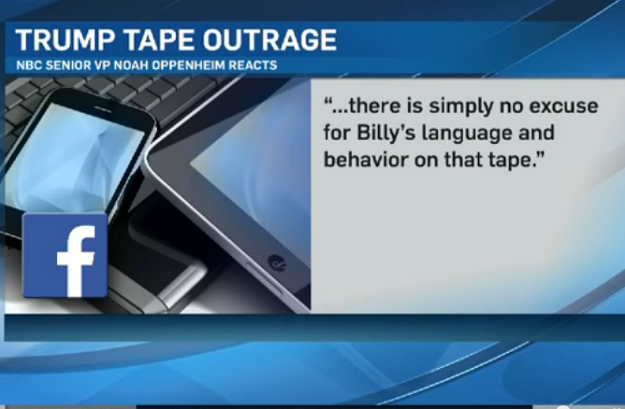 NBC has suspended Billy Bush for his part in the Access Hollywood “hot mic” discussion with Trump.  There is speculation as to whether he’ll be back or not.

Billy Bush is paying the price for participating in a lewd conversation with Donald Trump on the Access Hollywood set in 2005.

The “Today” show host has been suspended by NBC News while they delve deeper into the incident in question, which took place in 2005 aboard the Access Hollywood bus. The announcement was made on Monday, early in the live broadcast. “Today” host Savannah Guthrie delivered the news, providing very few details about if and when Bush, 44, may return to the set. According to Entertainment Weekly the statement echoed that sent to “Today” staffers in regards to the Trump tape leak and Bush’s punishment. Al Roker has stepped in to host the show’s third hour in his absence.

“We want to note one other thing: pending further review of the matter, NBC News has suspended Billy Bush, the host of ‘Today’s’ third hour, for his role in that conversation with Donald Trump,” Guthrie said.

While NBC News has not released a timeline of how long they expect to keep Bush away from hosting “Today,” rumors are swirling that his suspension may lead to a permanent exit from the show. Sources told People on Monday that Bush’s co-hosts don’t feel that he should return.

I said the same elsewhere, but…

NBC News had to either punish Billy or admit they knew about the tape all along and held on to it until now.

Much cleaner to have a fall guy.

I’m sure they took good care of him.