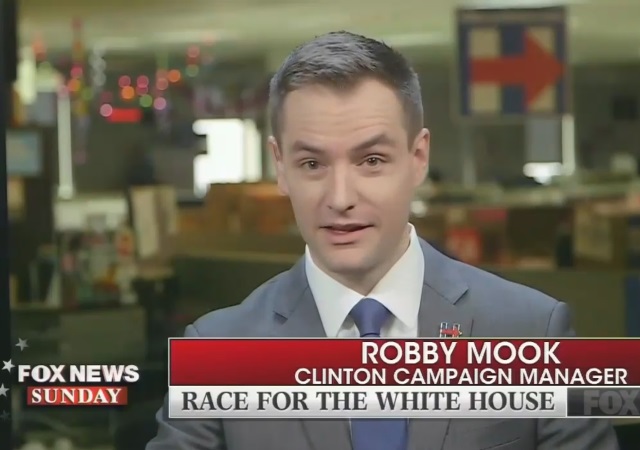 History’s Most Qualified Candidate couldn’t be bothered to read the second page of a two-page letter. That was Clinton campaign manager Robby Mook’s laughably lame excuse for the lie Hillary perpetrated in claiming that FBI Director Comey had only sent his recent letter to Republican members of Congress.

In fact, the second page of the letter clearly showed that all the ranking Dems on the various committees had been sent the letter. Mook offered up his feeble fish story to Chris Wallace on today’s Fox News Sunday.

Mook also repeatedly dodged Wallace’s question as to whether Hillary has asked Huma what was in the emails on the laptop Abedin shared with husband Anthony Weiner.

Note: at the end of the exchange, Mook says “if your question is whether Democratic leaders were cced on that letter, the answer is absolutely yes.” But that wasn’t Wallace’s question at all. He wanted to know why, six hours after the letter was issued, Hillary was still lying about Comey not having sent it to Dems. And all Mook could come up with was the pitiful notion that Hillary hadn’t bothered to read the second page. Why not admit the truth, Robby? Lying—it’s what Hillary Clinton does.

CHRIS WALLACE: Robby, I want to move on and I want to ask you about Secretary Clinton’s reaction. Here’s part of what she said on Friday night.

HILLARY CLINTON: If they’re going to be sending this kind of letter that is only going originally to Republican members of the House that they need to share whatever facts they claim to have with the American people.

WALLACE: Robby, why would she say something that is so flatly untrue? I have a copy here — it’s not very long. It’s the letter that Comey sent to Congress. On the front page, it’s got the eight Republican chairmen of the committees. If you just turn it over, you have the eight top Democrats on the committee. Why would she say that it was just sent to the Republicans when in fact it was sent to the Republicans and Democrats?

ROBBY MOOK: You know, Chris, this has been really overhyped.

WALLACE: Well, she said it, I didn’t.

She has acknowledged, we all acknowledge this was sent to everybody. Again, what we’re concerned and disturbed by is that Director Comey sent a letter saying we have some information, I don’t know if it’s significant, I don’t know if it isn’t, he didn’t say where it came from, he didn’t say what it was about. He didn’t even say whether these emails were sent or received by Hillary Clinton. And furthermore, another hypothetical that’s out there is these are duplicates that have already been released. We need all the information, and Director Comey needs to get it out fast.

WALLACE: But Robby, I want to make one more point about this letter. You say it’s hype. Comey sent the letter about 1:00 P.M. Eastern time on Friday. Your campaign chairman, John Podesta, put out a statement at 3:45 P.M. In which he made exactly the same charge that this letter had been sent just to the Republicans, not to the Democrats.

Three hours and 15 minutes later, Hillary Clinton makes the same charge. This was a talking point of your campaign and frankly it was a dishonest talking point.

MOOK: Chris, if your question is whether Democratic leaders were cced on that letter, the answer is absolutely yes.

Why not this lie? It worked for Eric Holder, Attorney General of the United States.

The serial liar lied again? Is anyone surprised?
The media and the democrats have sold their soul for
Crooked Hillary.

And these are her good points!

“Autistic”…??? Are you suggesting an excuse?

“Avaricious” would be much better.

Many people can do 2 or 3 of these well. She does them all. Wowser.

They know the comments she made in her press conference are what will get played in an endless loop after the bomb dropped. They wanted to create the impression that Comey is a partisan hack working in conjunction with Congressional Republicans. THOSE comments will be heard by many millions more people than will hear him admit two days later that it was all a lie.

As I mentioned in a comment on another thread, over 21 million people have already voted. That includes several tens of thousands of people who voted yesterday, before Mook cleaned up the lie. Yesterday, over 7000 more Dems voted in NC than in the comparable Saturday in 2012.
https://twitter.com/ElectProject/status/792727578251517952

It defies all reason, from my POV, but so does actually supporting T-rump (as opposed to voting for him out of complete desperation).

But you really don’t know who they are voting for.

I think Democrats are more likely to cross over then GOP. Mainly due to being Democrat because of unions and such.

NC has 1,600 precincts. Statistically, this works out to be an additional 4.375 Dem voters per precinct. I don’t know that this means anything other than Saturday was a beautiful day, weather wise.

Four? No, its a given with her corruption that 4 years will mean 8.

The Left’s plan is to resettle millions of amnestied illegals and muslim refugees in swing states, painting the Electoral College blue for all time, one party rule forever.

That’s what the NeverTrumpers simply don’t get – if we lose this election, we fall forever. There won’t be an opposition party, much less a viable 3rd party.

This is not some hollywood movie where the bad guys cheat, the white hats take the high road, and everything miraculously turns out okay in the end.

Comey better get his family into the witness protection program and soon. Getting between the Clintons and the acquisition of more power is risky business.

Mook has at least a 9.7 footsie pajama competitor.

She said this because her low-information worshipers will believe the conspiratorial overtones henceforth and forevermore.

So far, all routine, Standard Operating Procedure, just what we expect.

But, aside from the absolutely routine (for Team Hillary) fibbing, something new has been added since Comey’s letter was announced; Hillary’s new-found fascination with early voting.

Early voting is utterly inconsequential in an election; the tally of votes at the end doesn’t change.

EV can be used to try to discourage one side’s later votes. But it’s actually much easier to just lie about the numbers to do the same job, as the press did in Bush v. Gore to suppress late Republican turnout in western Florida.

And EV would make some kinds of voter fraud a bit easier. Imagine some poor fraudster who has to vote for dozens of dead voters or other bogus registrations, and has to do it all on election day. With EV, he can spread the job out over a week or two. What a relief!

Nevertheless, the intent of EV is certainly legitimate. Some guy who expects to be a couple of hundred miles out in the North Atlantic, bailing out his leaky old fishing boat while trying to reel in enough bluefin to make it all pay, might be greatly relieved if he doesn’t have to get into port on one particular day just to vote. Sounds good to me.

But Hillary’s obviously concerned about something else. She knows her situation is going to get worse, maybe far worse, in a matter of days. And what might be the cause of that? Comey’s investigation, of course; that’s all that’s changed recently.

So Hillary’s strategy is obvious; early votes are votes which can’t be influenced when the disaster hanging over her head actually drops. If she thought Comey had nothing but smoke and mirrors, she’d want voters to wait; she’d get a particularly good launch to the finish line when the Comey attack poots out. But she knows better, and realizes that only early voting can salvage a bucketload of her votes.

The down side of that game is that it tells us all that she knows that extinction is headed straight for her. But people who realize that weren’t going to vote for her anyway.

Wow, pathetic doesn’t even begin to cover that excuse Mook (what an appropriate name) offered! She was so desperate and rushed to play the victim card that she couldn’t even be bothered to read the whole thing, seriously?! To quote Syndrome from The Incredibles: https://www.youtube.com/watch?v=8i94SRN5j8k

This guy is such a lying, sniveling little bitch that I think his name will enter the lexicon.

As in “What a Mook” to mean that someone is a lying little punk ass bitch who needs to have his face smashed in.

For his own safety, this little Mook had better keep himself constrained to his prog bubbles.

Second pages are for the “little people.” /s

Question: Was Comey’s “letter” delivered in printed form, or by email, or possibly both? Let’s consider the printed and email cases separately, assuming Hillary received one or the other.

First, consider the hypothetical of her receiving a copy of Comey’s letter by email:

I hope you are feeling well. Just wanted to give you a ‘heads up’ about that Comey email investigation thingy. He just sent a letter to members of Congress stating that new information from the Weiner mobile has caused him to reopen the investigation into your emails. I have attached a copy of his letter to this email. May Alinsky be with us all.

It is my understanding that emails do not differentiate between “pages”. One simply scrolls along until the end of whatever message one receives. Therefore, if Hillary received a copy of Comey’s letter in an email, it is HIGHLY unlikely that she accidentally would not have noticed the “second page”, since there almost certainly would not have been a “second page” (rather, just one big honking page).

Now consider the case where she received a copy of Comey’s letter in printed form, with the letter spanning two printed pages. In this case, there would clearly be TWO physical pages, likely stapled together. One would have to be rather seriously neurologically impaired, it would seem, to not notice the second page in such a case.

Therefore, it’s clear that Hillary is, once again, lying her pantsuit off.

When I print out my Outlook emails they are in separate numbered pages, though not the email appearing on the screen.

As we’ve heard from Huma, Her Highness likes to have somebody print e-mails out for her. And, just at a guess, at Hillary’s age she probably prefers large print. And people at the top of the bureaucratic pile often like double-spacing and wide margins, so they can write notations as the mood strikes. So all but the shortest e-mails are likely to be multi-pagers.

Wallace should have asked, “let me get this straight, you’re saying that a candidate for the Presidency is so careless that she would publicly make a serious false accusation against the director of the FBI without first ensuring that she had her facts straight by, you know, reading all three pages of the letter first? Is this the kind of recklessness that should be in charge in the Oval Office?”

Robby looks a little young and wet behind the ears ,clearly not Mensa material, .
He should be concentratingbon getting a date for homecoming

I would love to line up all the Democrat press secretaries from the last eight years and bitch-slap them one by one for all the BS they have piled through the years. How they live with themselves is far beyond my comprehension.