Michael Moore: Trump’s election will be the biggest “F—ck You” in human history

Michael Moore: Trump’s election will be the biggest “F—ck You” in human history

“The human hand grenade that they can legally throw into into the system that stole their lives from them.” 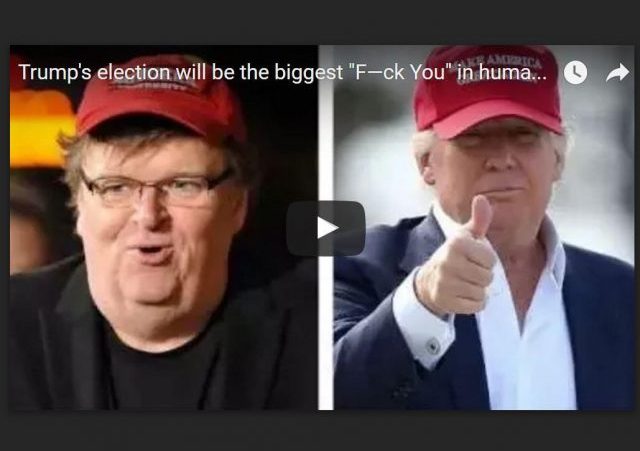 Sometimes Michael Moore gets it right in assessing the mood in the forgotten, economically depleted parts of the country. Though he may be overly optimistic in thinking Trump will win, unless this is Brexit Part II, and the polling and conventional wisdom are off in a historic way.

… Trump’s election is going to be the biggest Fuck You ever recorded in human history. And it will feel good.”

It’s not clear when the audio below was made, but it’s circulating now.

“Legally, you have a right to vote on November 8th. You can go in there and even though you’re not necessarily in favor of Trump and you don’t like him that much and you know he’s a little crazy, you also know he’s going to blow up the system. The system that took your job and house away from you. You get to get back at the system now and blow it up and this is the only day you can do it legally. He’s told everybody that’s what he’s going to do. He’s the outsider who is going to ride into town and blow up the old way. So you, as a voter, get to participate in the detonation. He’s going to get a lot of votes from people who actually just want to sit back and watch the thing blow up.”

Bizarre how he twists words. That’s the whole point of voting: to change things if you don’t like the status quo, and to support them if you do.

So, he wants to accuse voters of “blowing up” things – when really, Trump voters want to stop the “fundamental change” that Obama and the left want. We liked our country. We don’t want it sandblasted to smithereens.

Moore is such a demagogue and propagandist. Such a bore.

Sending a giant FU to that blob Mikey Moore? That’s the best reason I’ve heard yet for voting Trump.

Yes, wouldn’t it, though? Too bad the delicious irony is lost on morons like Moore.

Odd…. My ballot (already cast in early voting) was three pages long. The Presidential choice section was just a small portion of the first page. More important to me were the Senate and Representative choices as well as the state level candidate choices and state Constitution change choices.