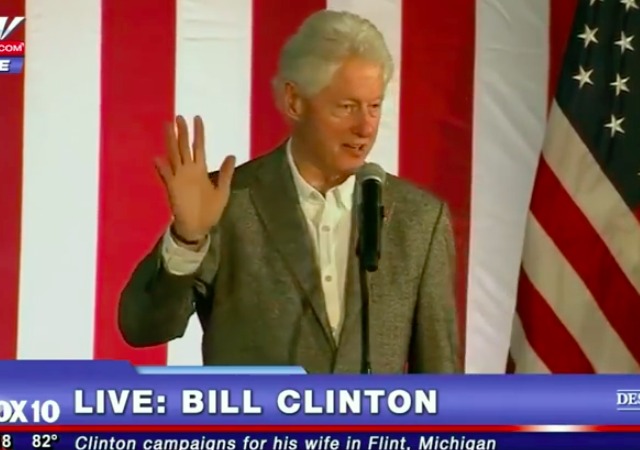 The Wikileaks dump of John Podesta’s emails have led to a treasure trove of information, but one memo caught many eyes because Bill Clinton’s old advisor Doug Band wrote out ways the former president used the Clinton Foundation to build is personal wealth. He even referred the foundation as Bill Clinton Inc.

Band, who also worked at Teneo Consulting, pushed out the memo after a fight between him and Chelsea Clinton, who said that Band others used her father and the foundation for their own profits.

Band laid out the companies that started to pay Clinton when they became large donors to the foundation:

Band wrote that while he and Clinton aide Justin Cooper helped manage and secure these fees for Clinton, neither one received any money for their activity: 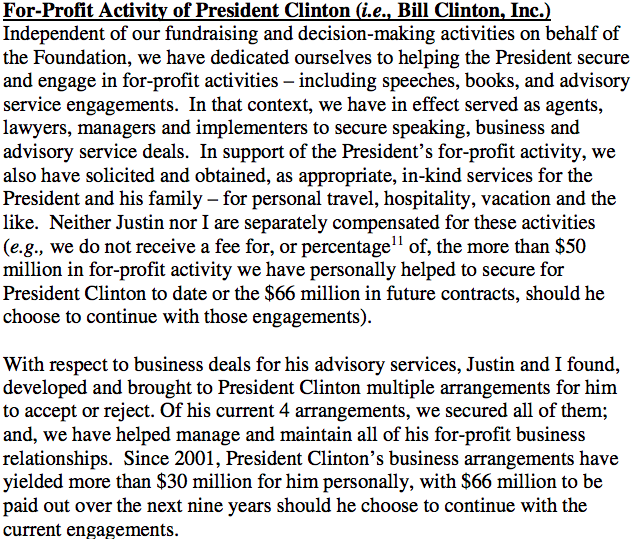 He ended the memo by insisting that Cooper and himself have done all they can to help Clinton and try to keep everything level “to best fulfill his person, political, business, official former President, and Foundation/non-profit goals.” This implies that it is hard for the aides to stay steady since Clinton stretches them out in different directions.

Emails in previous dumps have shown the conflict, with Band venting his frustration to Podesta. In one email, Band told Podesta he had to sign a conflict of interest policy because his wife helps design purses for the foundation, thus losing money and time. Then he points out Clinton never had to do such a thing: 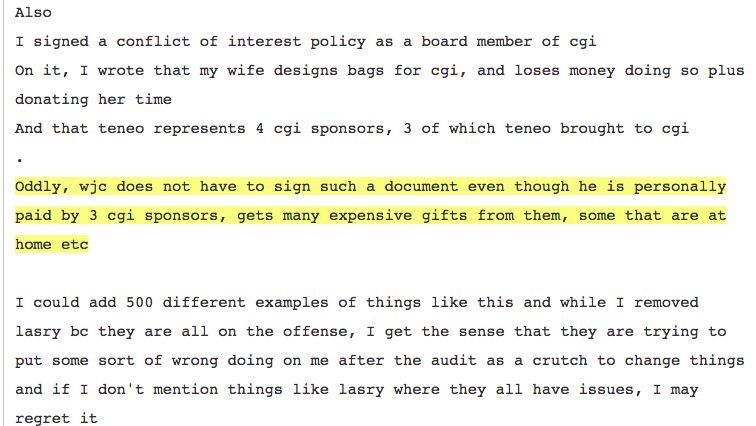 The Clinton Foundation and Hillary Clinton’s campaign did not release a comment on the memo, but Teneo sent out this statement:

“As the memo demonstrates, Teneo worked to encourage clients, where appropriate, to support the Clinton Foundation because of the good work that it does around the world. It also clearly shows that Teneo never received any financial benefit or benefit of any kind from doing so,” the spokesperson said.

Not surprising about the lack of NY oversight for the foundation in 2013; note the address:

This information has been around for a while. The Clinton foundation provides a (for example) $10M grant to some charity who then in turn hires Bill to be on the board of directors and pays him $2M per year.

This is, or should have been, common knowledge for years now.

I believe that is the definition of “Pay to Play” or crony capitalism or more actually, FASCISM. Think of the Clinton Crime Family Foundation Slush Fund as “Schiendler” when dealing with the Haitian “situation” but it didn’t turn out quite so well for the Haitians.

I have to wonder if Mary still thinks HRC is a sure thing.

In other news water is wet….

And POOF, the msm which had barely started covering the wikileaks now goes off on a wild and probably useless goose chase.