After 71 years, the Cubs finally made the World Series. 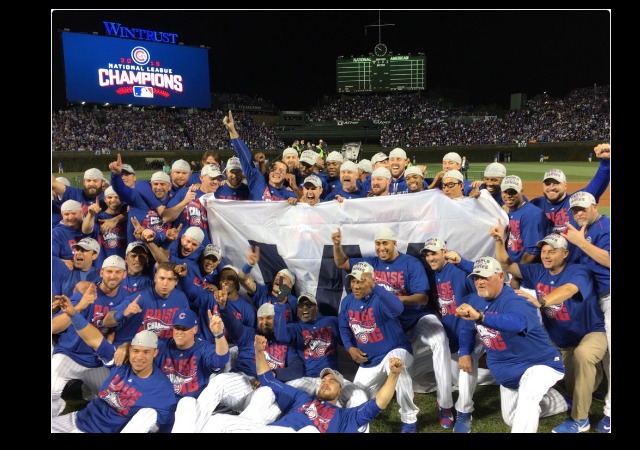 Billy goats. Black cats. Bartman. The 2016 Chicago Cubs have eliminated those curses and jinxes when they defeated the Los Angeles Dodgers 5-0 in the National League Championship Series on Saturday night to advance to their first World Series since 1945.

Why is this so important? Why is this such a big deal? As a lifelong diehard crazy Cubs fan, I will tell you. Let me take you on a journey through the tortured past of the Cubs because for the first time in forever, it’s not as painful to look at these incidents.

Today In 1945 ⚾ "The Curse of the Billy Goat" begins as the Chicago #Cubs kick Billy Sianis & his goat out of the World Series! #postseason pic.twitter.com/8dzdW8kJTS

When the Cubs kicked out Sianis and his goat, Sianis swore the Cubs would never make the World Series again. The Cubs dropped the 1945 World Series to the Detroit Tigers in seven games. The Billy Goat curse began….

In 1969, the Cubs had it all with Ron Santo, Ernie Banks, Billy Williams, and Fergie Jenkins. But at Shea Stadium against the Mets, who were slowing climbing the ranks, a black cat got onto the field, encircled Santo on deck and then walked in front of the Cubs dugout.

On this date in 1969, black cat passed 1st-place Cubs dugout.

Collapse. Utter collapse. The Cubs dropped in the standings, didn’t make the playoffs, and the Miracle Mets somehow won the World Series.

Then, in 1984, the Cubs made it to the playoffs and faced the San Diego Padres. The Cubs grabbed a 2-0 series lead, but once again…collapse. The Padres tied it 2-2, but in Game 5, the Cubs had the lead until the sixth inning. Their stellar first baseman Leon Durham made the most amateur error…letting a routine groundball go through his legs. He Bucknered before Buckner in the 1986 World Series! The Padres went to win the pennant.

The Cubs made the NLCS in 1989, but lost the series to the Giants 4-1. They almost won in Game 5, but once again….the pitchers gave up too many runs in the 8th inning. Cubs rallied in the 9th to make it 3-2, but Ryne Sandberg, yes RYNE SANDBERG, grounded out.

2003. Wow. This 2016 NLCS eerily mirrored that NLCS. The Cubs had a 3-2 series lead going into Game 6 at Wrigley Field. They entered the sixth inning with a 3-1 lead and then this happened.

It deflated the Cubs, led to errors and simple misses. The Marlins scored EIGHT runs that inning. They tied the series and won Game 7.

That game confirmed to fans that the Cubs are indeed cursed.

The Cubs made the NLCS in 2015, but the Mets swept them in four games. Cursed. Jinxed. Us fans almost accepted the reality we’d never see our team in the World Series.

But 2016 gave us hope. 103 wins. In first place from the first pitch of the season. Won the division by 17.5 games. However, going into Game 6 caused hesitation since the Cubs had to face Clayton Kershaw, the Dodgers best pitcher. But from the start, the batters dominated him as Cubs pitcher Kyle Hendricks showed once again why he deserves the Cy Young. Home runs from Anthony Rizzo and Willson Contreras helped the Cubs win 5-0 and exorcise the demons out of Wrigley Field and the Cubs organization.

The pennant means as much to the Cubs world as a World Series win. The jokes and jabs we receive on a daily basis EVERY SINGLE YEAR, calling the Cubs the lovable losers. National broadcasts constantly reminding us what happened in the world the last time the Cubs won or went to the World Series because WE TOTES FORGOT ABOUT IT.

Not this year. Not this time. Now no one can talk about billy goats, black cats, or Bartman.

Yes, the Cubs still have to win four more games against the Cleveland Indians, but this pennant has eased our lives. It provided a breath of fresh air. The Cubs finally got over that hump. The Cubs are FINALLY in the World Series again.

Here’s the other thing. This isn’t a fluke or luck. The Cubs are young and talented. Rizzo is the oldest infielder at 27. Our farm system is still stacked despite giving up many to sign Aroldis Chapman at the trade deadline.

Don’t believe in goats and cats and any other so-called curses. I think Bartman was made a scape-goat. If the Cubs were champions, they would have overcome what happened in that incident.

That being said we’re looking at two teams who have had long dry spells when comes to being World Series champs: Indians at 68 years and Cubs at 108 years. So, I hoping for a series in which two teams play their hearts out at the top of their capabilities and let the best team win!

Agree with your sentiment.

As a city, Chicago has had its share of recent professional champions. But as a franchise, the Cubs haven’t been among them.

For Cleveland, this year’s NBA championship broke a long, long spell for ALL the city’s professional teams.

Tough one to hope for, but on balance my hopes are for the Cubs.

VegasInsider has the odds at 1/2 for the Cubs and 9/5 for the Indians. I’d like to be in Chicago for a couple of days, even without series tickets, just to participate in all the hoopla!

Speaking as a lifelong Braves fan with a vivid memory of the 1990 and 1991 seasons, sometimes it’s enough to just make it to the World Series.

As a lifelong Pirates fan, who VIVIDLY remembers October 14, 1992, and with great regret, I concur.

To put a perspective on 538 and Nate Silver:
https://twitter.com/natesilver538/status/786056103188508672
A Chicago Cubs vs Cleveland Indians World Series is now slightly more likely than a Trump presidency.

Pffft. Baseball is not a sport, it’s a kid’s game. And a wussy game.

I have been a lifelong Cubs fan (I’m from northern Indiana), though not fanatically so. I remember watching that Bartman game. I remember being nervously optimistic that the Cubs would win the game, and the series. Even when Mark Prior started faltering just a little, there were only 5 outs remaining, and the Cubs were ahead by 2 or 3 runs at the time. Then, Bartman kept Alou from catching the foul (debatably fair) ball. Right then (and I’m not joking or exaggerating), I KNEW the Cubs would lose the game and the series. I don’t know how I knew, but I knew.

hate dealing with having to edit scheduled recordings to work around games (football/baseball) running long.
pisses me off.

for those that enjoy the games, best wishes hope you have good time.
no sarcasm.

The Indians are going to SCALP the Cubs. This is Cleveland’s year.

I love National League baseball but on this one, Go Tribe! (Hey Tito, we can send you a car load of black cats if you need some–any Mets fan will be glad to assist!)