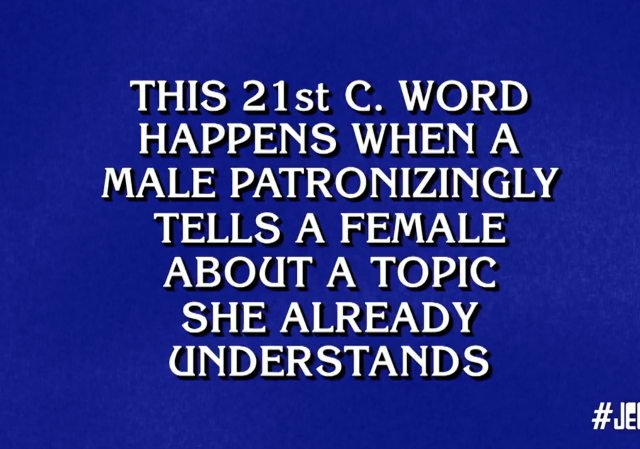 Everything is awful. EVERYTHING.

Not even ‘Jeopardy!’ is safe from the tentacles of neo-feminism.

According to HuffPo, “mansplaining” made its ‘Jeopardy!’ debut on October 19.

The segment is here:

Like most neo-feminsist ideals, “mansplaining” unfairly and categorically maligns men, while pretending women are never condescending. The entire premise of mansplaining is based on the assumption that condescending men are so because they are speaking to a woman, and fails to consider other variables.

There’s no such word to describe a condescending female degrading a male counterpart. Am I supposed to believe never has there been a condescending, rude woman? The absence of “womansplaining” or some such term implies as much. But we all know that’s a crock of hooey.

And as for ‘Jeopardy!’ buying into this garbage? ‘Sean Connery’ said it best in an SNL rendition of ‘Celebrity Jeopardy!’:

Jeopardy! Was always reliably on the right. I blame the Trump effect splitting conservatism. Nobody wants to be with the pig.

Wow! That is some contrived Trump bashing for sure.

The ‘pigs’ are the Clintons.

And you are a pig-enabler.

For as long as I can remember, Jeopardy has had a liberal slant. For the most part I just ignore it. Besides, now we have an alternative:

No surprise, given that the age of their Q & A clue writers is probably not above 22 or so. This slant and the newspeak and the rest is all “baked in” given the years of their “education.” Soon I expect a clue/question on the goofy “pronouns” the social justice idiots insist we all start using, because for some reason in their world one must not discern the sex of someone as we speak to them, zir, hir, whatever.

I miss the G.E. College Bowl.

What is the word when a female chauvinist tells a male, a female, about a topic he, she, already understands?

What is Hillary testifying before Congress?

[Remember, all answers must be in the form of a question]

I’m sitting here with a good cigar, some fine Islay scotch, man-spreding for all I’m worth!

Close your legs Nancy, even that cigar can’t cover the stench.

First we let them vote, now look at the mess we have. How many women actually know how to make a pie today?

did you ever wonder why they don’t sell encyclopedias anymore? It’s because every man’s wife already knows everything there is to know. No need to explain anything to women.

Well, someone needs to explain to them how to make a pie.

What my wife and I really hate on Jeopardy is Alex Trebek’s affected French accent. He’ll always correct the contestants’ pronunciation to prove he’s better than they are. We’re eagerly looking forward to his long-overdue retirement.

What’s the word for when women lecture men on perpetuating a rape culture that they know does not exist?

Jeopardy went down the tubes a long time ago when the questions became so easy that I knew the answers.

“Am I supposed to believe never has there been a condescending, rude woman?”

Including the one running for President.

Most women I know are leftist. My friends are personable, engaging and supportive.

‘Clintons.’ Though the judges agree that ‘Obamas’ will also suffice.