In “Creepy Clown” News: Guy Dressed As Clown Beaten By Men He Tries To Scare

In “Creepy Clown” News: Guy Dressed As Clown Beaten By Men He Tries To Scare

And they took his balloons 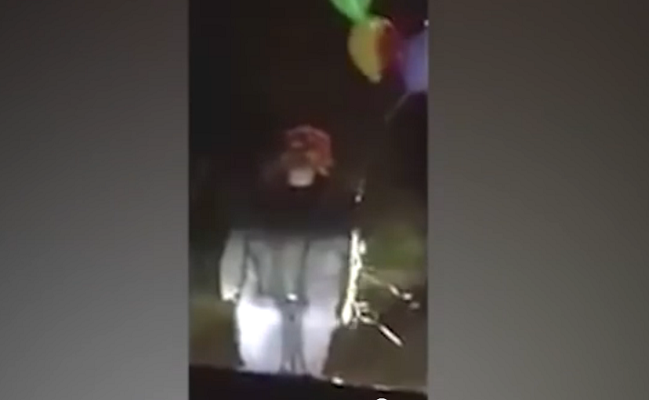 The clown stories are piling up, and here’s a cautionary tale for all would-be “creepy clowns.”

One US man got a massive beating after dressing up as a creepy clown and trying to scare a group of friends in a car.

Footage of the incident shows the clown, holding some balloons, walk close to a car where a number of men were hanging out.

‘What the f**k is that, bro?’ one of the man is heard saying as he spots the clown.

‘Are you serious?’ he adds, yelling to the clown: ‘Get away!’

One of the men gets out of the car with what appears to be a baseball bat and whams the clown on the side of the knee.

‘What y’all doing?’ yells the man filming, who stays in the car while the action is happening.

The clown falls to the ground — and two men join in, pummeling him down with punches.

One of the men takes the clown’s balloons and the friends head back to the car, leaving them the clown on the ground.

He didn’t even bother to wear a full clown costume.

What a loser. I hope he’s in critical for a month.

Clown lives matter. I hope these guys are caught and prosecuted for felony assault.

Standing in the road dressed as a clown may be a stupid thing to do, but in no way warrants the kind of attack these punks laid on him.

A few more episodes like this, and then the clowns may well arm themselves. You think a clown with balloons is scary? Wait till he unloads a glock on your baseball bat swinging ass.

Those clowns better be careful. They’ll mess with the wrong people and get shot.

Anyone else catch the “run him over” in there?

Yes, I heard that, too. They were obviously frightened (one guy refused to get out of the car); it’s not clear that they were frightened because of the creepy clown epidemic or if they were just creeped out being approached by a guy in a clown mask carrying balloons who refused to back off when they explicitly told him to do so many times.

This is soooo fake. If the “clown” didn’t have so much padding and if the punches actually connected, it may be a little more believable. The acting is almost as bad as Crooked Hillary’s.

Oh! If this really is a hoax, it’s even better!

See a clown, run him down!