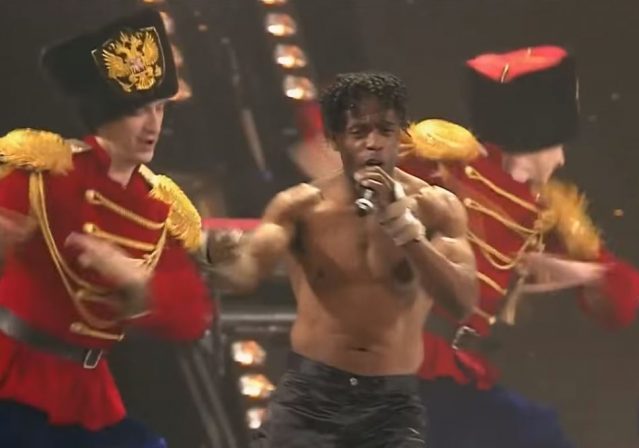 I never pass up an opportunity to play Boney M music.

I first wrote a separate post about Boney M was when lead singer Bobby Farrell died in December 2010:

That is a name I had not heard in decades.

When I studied in the Soviet Union many of the East European students loved the group Boney M and were surprised that none of the Americans in our group had heard of it.  To them, Boney M was supposed to be one of the leading bands in the U.S.

The Soviet Bloc students played Boney M in much the way we might play various classic rock anthems — they knew all the words and swayed together as the music played.

When I returned to the U.S. I even went out and bought a Boney M album, more as a momento than anything else.  It would be impossible to explain to friends the absurdity of the East European perception without actually playing the music.

I can’t recall the last time that I thought of Boney M before today, when I saw a Tweet by the Lebanese website Naharnet that “Boney M’s Bobby Farrell Dies” with a link to this article:

Bobby Farrell, singer and dancer with 1970’s disco group Boney M, died early Thursday in a hotel room in Saint Petersburg, where he had been performing, city officials said. He was 61.

The Saint Petersburg investigative committee of prosecutors said the Aruba-born Dutch singer was found dead in his bed by a staffer at the city’s Ambassador hotel.

“There was no sign of violent death,” a committee source said. “The investigation continues.”

I have played Boney M songs in the rotation of Video of the Day from time to time, including in advance of my trip to Israel in 2013,

Longtime readers know that Boney M and I go way back.

For some reason I couldn’t get this song out of my head last night.

By the rivers of Babylon, there we sat down, yea, we wept, when we remembered Zion.

If I forget thee, O Jerusalem, let my right hand forget her cunning.

Let my tongue cleave to the roof of my mouth, if I remember thee not;
if I set not Jerusalem above my chiefest joy.

I’ll be in Israel in late July, including at least three days in Jerusalem. I plan to meet some of our Israeli blogger friends as well as a reader who reached out to me.

I just found another excuse to write about Boney M. A report that a brother of one of the lead singers was sentence to life in prison.

A Syrian-born preacher was shot dead by a former soldier in a contract killing ordered by the brother of a Boney M singer.

The hit was ordered by mosque ‘ruler’ Khalid Rashad, 62, the brother of singer Liz Mitchell, who fronted the 1970s chart-topping disco band.

Rashad had been locked in a legal battle with Mr Arwani as he tried to oust him from the An-Noor Cultural and Community Centre in Church Road, Acton.

Cooper and Rashad – both Jamaican-born Muslim converts – were jailed for at least 32 years each for the murder earlier this year after a trial.

.@Blazingcatfur BONEY M was YUGE in Soviet Union when I studied there in 1980 https://t.co/JgwTqijZUl

My sources tell me that Boney M was/is huge in SE Asia.

You can post their cover of The Carnival Is Over, although is does not compare to the Seekers’ original:

Not even in the same league. But then, they weren’t trying to be.

As I grew up in communist Cuba, you could count with one hand the English speaking bands allowed in the island (radio or TV). The Boney M were one of the few, so this is the kind of music I grew up listening to.

I’d always assumed the group was out of the UK for some reason, perhaps because I only ever heard their stuff when I lived in Ireland (both Rasputin and Rivers of Babylon came out when I was over there), and then when I got back to the States in ’84 virtually no one I knew seemed to have any idea who they were.

DU players at Trinity used to put on a panto every year in December and the year before I became involved with them they had done a unique version of McBeth. I just know that one of the songs they created for it started “Rah, rah, Dunsinane, residence of Cawdor Thane”.

Two things that seem weird to me. 1.That Boney M is singing English in Russia and they love it.
2. I always thought the Russian people were all bears on unicycles?

The group that fascinated BOTH China and the Soviet Union was Depeche Mode.

Don’t know about China. In USSR Depeche Mode were known from what I remember. Classic rock was popular, mainly H Stones and The Beatles. Metal was huge, especially among the young men. Pop was popular too, mostly including insufferable German bands like Modern Talking. Towards the end of the 80s everyone discovered the strange creature that was Russian Rock.

I have no idea why Bonney M were so big. I suspect it has something to do with hem being a B-level Western band which made them less expensive to bring to the USSR. Any Western pop band brought to USSR in the last decades was destined to explode.

Yeah, same experience. Huge name in USSR, one of the relatively few western bands commonly sold (along with Stones and some Elton John and Eagles, as I recall). Once I got to US, nobody has even heard of them.

No clue why. They are not horrible, not great.

Hmmmm. The first thing that came to mind was ABBA.

This really brings back memories. They were really big in England during my London semester abroad in the fall of 1978. All I have to hear is the name Boney M. and “Rah, rah, Rasputin, Lover of the Russian Queen” starts playing in my head.

I wasa big Boney M fan and still have one of their cd’s in my car.