Charge listed as “skin to skin after C-sec” 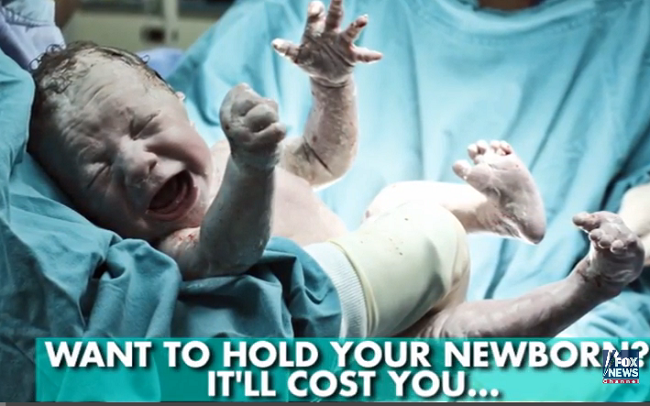 Reddit user halfthrottle, who shared a picture of his bill from Utah Valley Hospital with the amount of $39.35 highlighted for “skin to skin” after his wife’s C-section.

“I had to pay $39.35 to hold my baby after he was born,” the dad wrote in an Imgur post that has since gone viral. He later added, “The nurse let me hold the baby on my wife’s neck/chest. Even borrowed my camera to take a few pictures for us. Everyone involved in the process was great, and we had a positive experience. We just got a chuckle out of seeing that on the bill.”

. . . .  Utah Valley Hospital spokeswoman Janet Frank said in a statement to PIX11 that there was an additional nurse in the room during the C-section, which is why there was the charge.

“In the case of a C-section, where the bedside caregiver is occupied caring for the mother during surgery, an additional nurse is brought into the OR to allow the infant to remain in the OR suite with the mother,” the statement noted. “This is to ensure both patients remain safe. There is an additional charge associated with bringing an extra caregiver into the OR. The charge is not for holding the baby, but for the additional caregiver needed to maintain the highest levels of patient safety.” 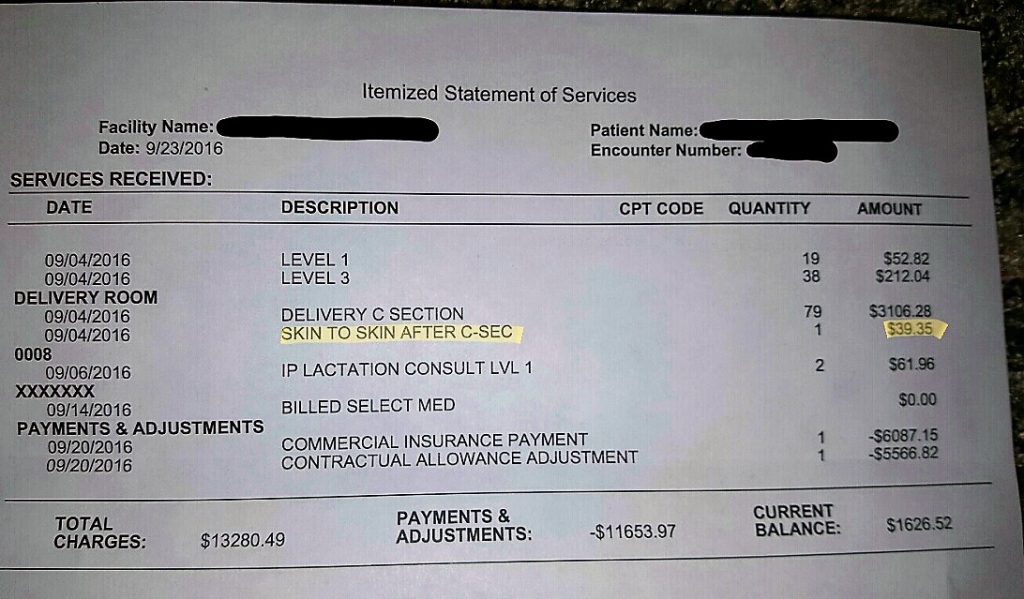 The statement is super clear:

Or something like that.
They are charging for “skin to skin contact”.
I say “Utah Valley Hospital spokeswoman Janet Frank” and the hospital itself are full of s…

I was a bit puzzled by that explanation, too, Exiliado.

I have been a Nurse for 21 years and I can tell you that explanation is complete crap for several reasons.

1: The “bedside nurse” who they claim is busy is scrubbed in and can’t leave the table or she has to rescrub because her sterile field is broken. So the “bedside” Nurse would never have cared for the child in the first place.

2: In most states it is required by law to have an OB nurse in the OR during a c-section because the rest of the nurses are surgical nurses, most hospitals will actually have 2 OB nurses if at all possible. So there was no “extra” nurse in the OR.

Think about it the Surgical nurses concentrate on the surgery, you have to have another team of nurses for the baby because the OB Doc is sewing up Mom.

3: $40 wouldn’t even pay for the extra nurse. Remember it’s not just the Nurse’s pay but the overhead for the Nurse as well.

Thanks so much Gremlin! Your insight is valuable and much appreciated. Instinctively, I didn’t believe it, and now I have a logical professional reason for not doing so. 🙂

The real test is whether this charge has ever appeared on a bill where dad wasn’t in the room. I doubt they’d dare charge a mother to hold her baby.

Unfortunately medical bills are not what they appear.

Insurers will pay a certain maximum amount for various services. A doctor or medical office which has learned to “work the system” (i.e., all of them who have been in business more than six months) will find ways to bill in such a way that none of that money is left “on the table”.

It’s not medicine, but it is business. If the customer’s willing to pay it, the vendor would be crazy not to charge it.

Much—usually most—of what’s billed is disallowed and just axed. So most of the weird stuff ends up being inconsequential. But it’s still an integral part of the game of American medical billing.

This is where the uninsured get reamed. They’re not insiders and have no way to work the system the way it’s supposed to be worked. So they get stuck with the weirdly inflated charges with no way to disallow any of them.

Not surprisingly, the whole problem of fictionalized (no … creative) paperwork is far worse than mere money. All the forms have little boxes which have to be filled out. Official state forms for “cause of death” have a little space intended to accommodate two or three words in Latin. In all but the simplest cases, what’s put in there is reduced to a shorthand which makes no sense at all to the uninitiated … like, say, the deceased’s relatives. They’ll demand to know how someone can die of [insert apparently trivial cause here] and suspect, sometime loudly, that there’s some funny business afoot. And so there is, but it’s not what they think.

If you have a chatty physician ask him about some of these shenanigans. It will be enlightening, unless he’s treating you for high blood pressure, in which case he probably won’t tell you about the really good stuff.

There is a name for that “creative” billing: fraud.
And believe me, I have little sympathy for the insurance companies, but the problem is that the ones getting screwed are the patients/consumers.
Example: When my son was born, the hospital billed for the services of 3 different anesthesiologist. I was there the whole time. There was only one. They billed for the services of a dentist. I was there the whole time. No dentist.
So the bills get piled up, and there’s a problem: you have a co-payment. And it’s not funny. You’re forced to pay a percentage of charges that you know are fraudulent. The insurance company pays because it’s cheaper than fighting it, and they can always raise the premiums. And you have no protection against that.

It is a corrupt system, and now thanks to Supreme Leader Obama, the system became more corrupt, and we all are forced to participate.