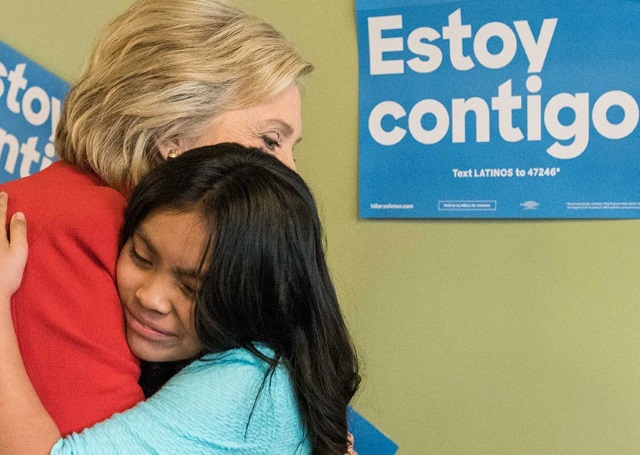 While Hillary Clinton overall enjoys overwhelming support from the Hispanic community, the Hispanic millennials have not fully warmed up to her campaign.

The majority of these millennials backed Sen. Bernie Sanders (I-VT) during the primary. He has encouraged his supporters to go to Hillary, but many have hesitated. Those who do support her “are doing so grudgingly.”

A recent study by the Pew Research Center found that just 48 percent of Latino millennials said they support Clinton, compared to 66 percent of older voters. To put that in perspective, the millennial generation makes up about half the record 27.3 million Hispanics eligible to vote in November.

“Many young Latinos have said they don’t trust Hillary Clinton,” Mark Hugo Lopez, the director of Pew Hispanic Research told Fox News Latino. “They have some questions about how she handled things when she was secretary of state, what she will actually do with immigration reform, what her policy will be toward Latin America.”

Erika Andiola, the Latino Outreach director for the Sanders campaign, said the group does not like “what is happening,” but believes it is more important to keep Trump out of the White House. From The Boston Globe:

“We want to see a more forceful attack against inequality in this country,” said Juan Cuba, the 31-year-old director of the Miami-Dade Democratic Party who had voted for Bernie Sanders during the Florida primary but now supports Clinton. “At the end of the day millennials see the car crash that is the Donald Trump campaign, and the things that he is offering will set us back even further.”

Actress Rosario Dawson, a major Sanders supporter, refused to back down from her previous comments about Hillary at the DNC. She still insisted that Hillary “is not a leader, she’s a follower.”

Of course the Hillary campaign does not believe she still has this problem with Latino millennials:

“In all the other polling we have seen, it shows that Latino millennials are planning to vote in very, very high numbers for Sec. Clinton,” Hillary For America pollster Matt Barreto said during a conference call on Tuesday.

In all the other polling we have seen

I’ll wager it was “selectively edited” and “taken out of context”.

They will be made to care.

One quick fact that many low-income Hispanic citizens know and we tend to forget. Bringing in a few million illegal immigrants will hit these voters right in the pocketbook, as they will compete for the same jobs. So a legal voter who has filled out the forms, went through the process, paid their fees, gained citizenship, and is now ready to vote, has to compete with somebody who just walked across the border last week and wants their job.

Offhand, do we know anyone who is excited about a Hillary presidency?

Not “excited.”
“Scared shitless” would be a more apt term.

Our only hope is that people tend to not like Trump, tend to not show up on election day.

Voting, like paying for your own crap takes an ounce of initiative.