“Digging up a woman’s sexual past was a classic shaming strategy.” 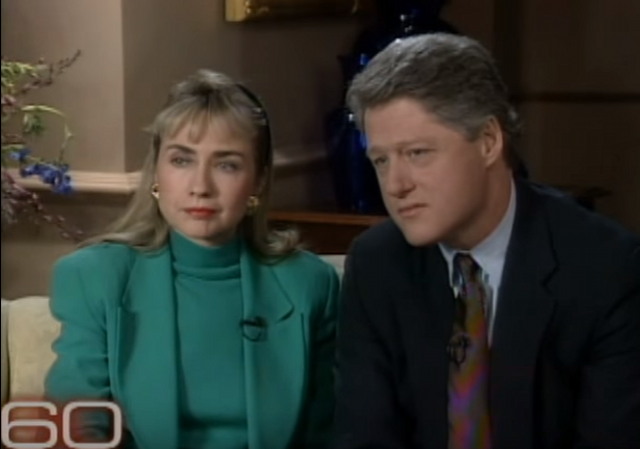 Democrats and their media allies are trying to revive the “war on women” from their 2012 playbook. The best they can do however, is accuse Trump of fat shaming a beauty queen over twenty years ago.

Trump has been teasing that he might go after Hillary for the way she treated Bill Clinton’s women over the years but it seems The New York Times has beaten him to the punch.

This report from Megan Twohey is filled with all kinds of sordid details:

How Hillary Clinton Grappled With Bill Clinton’s Infidelity, and His Accusers

Hillary Clinton was campaigning for her husband in January 1992 when she learned of the race’s newest flare-up: Gennifer Flowers had just released tapes of phone calls with Bill Clinton to back up her claim they had had an affair.

Other candidates had been driven out of races by accusations of infidelity. But now, at a cold, dark airfield in South Dakota, Mrs. Clinton was questioning campaign aides by phone and vowing to fight back on behalf of her husband.

“Who’s tracking down all the research on Gennifer?” she asked, according to a journalist traveling with her at the time.

The enduring image of Mrs. Clinton from that campaign was a “60 Minutes” interview in which she told the country she was not blindly supporting her husband out of wifely duty. “I’m not sitting here, some little woman standing by my man like Tammy Wynette,” she said.

Outwardly, she remained stoic and defiant, defending her husband while a progression of women and well-funded conservative operatives accused Mr. Clinton of behavior unbecoming the leader of the free world.

But privately, she embraced the Clinton campaign’s aggressive strategy of counterattack: Women who claimed to have had sexual encounters with Mr. Clinton would become targets of digging and discrediting — tactics that women’s rights advocates frequently denounce.

The campaign hired a private investigator with a bare-knuckles reputation who embarked on a mission, as he put it in a memo, to impugn Ms. Flowers’s “character and veracity until she is destroyed beyond all recognition.”…

By the time Mr. Clinton finally admitted to “sexual relations” with Ms. Flowers, years later, Clinton aides had used stories collected by the private investigator to brand her as a “bimbo” and a “pathological liar.”

George Stephanopoulos, now a “journalist” for ABC News, is also implicated in the attacks on Bill Clinton’s accusers:

Weeks later, their first taste of trouble came in a Penthouse magazine story by a rock groupie named Connie Hamzy, who claimed Mr. Clinton had once propositioned her at a hotel in Little Rock, Ark.

Mr. Clinton brushed off the story, saying that Ms. Hamzy had made a sexual advance toward him, George Stephanopoulos, the communications director of the 1992 campaign, recalled in his book, “All Too Human.”

“We have to destroy her story,” she said, according to Mr. Stephanopoulos.

In what became a common tactic, affidavits were collected, from an aide and two others who stated that they were with Mr. Clinton at the hotel and that Ms. Hamzy’s story was false.

This is a rather pointed choice of words:

Back on a plane that night, Mrs. Clinton told Ms. Sheehy that if she were to question Ms. Flowers in front of a jury, “I would crucify her.”

This portion should also be noted:

Gloria Allred, a well-known women’s rights lawyer who was a convention delegate for Mrs. Clinton, said that digging up a woman’s sexual past was a classic shaming strategy.

“Most people are not nuns, and most people aren’t Girl Scouts,” Ms. Allred said. “That doesn’t mean they’re not telling the truth.”

There’s so much more. Read the rest here.

As long as we’re on the subject, here’s the classic 60 Minutes interview the Clintons did in 1992:

Please Democrats and media, tell us more about how Trump thought a beauty queen should lose some weight.

Too bad Twohey forgot to mention Juanita Broaddrick, one of Bill’s campaign workers when he was running for governor. He raped her.

That was harsh Rags.

We all know what this and it’s called a “Diversion”. Have any of us read or heard anything about hillary lately? Do we even know if she is alive? Bernie won’t campaign with her any longer because of her treacherous comments about his followers. But the msm have dropped that entire story. Not like the infamous Rmoney 47%. If there was ever a moment in time where Trump needs to focus it is now. No more tweets and no more off the cuff comments about anything the msm brings up. He should be the one to bring up the subjects, not the msm. What does the msm ask hillary? How’s your health? Or how are your grandchildren doing?

Wow Illary actually tried to discredit “Sweet Sweet Connie” by showing she was a bimbo?

The irony of Hillary Clinton, who has attacked women for decades (although mostly for sleeping with her husband), attacking Donald Trump on this topic is breathtaking.

She’s got more gall than a bladder.

The problem with this story is most of it is already part of the Hillary legacy, so for most voters it’s already “discounted” as we say in the market. It may help keep some younger voters from turning out for her – which was already a big concern for her candidacy, Obama’s inexplicable popularity with the young not being transferable – but is more likely to make them stay home or vote for Stein or Johnson than to switch to Trump, who they like even less.

Once the Democratic establishment and Big Media decided to accept Bill’s philandering, first the rumors and allegations in ’92 and later when he was caught red-handed with Lewinsky, whatever Hillary did to protect him went in with it. Pretty much all of us who objected already opposed them both.

I do not expect any married woman to speak either kindly or respectfully about her husband’s sex partners during their marriage.

I resent the calculated accusations against the political opposition as a cover for a political vulnerability, most especially when the accusations are false. She is sexist, and racist, indifferent to the welfare of the people who serve us, dishonest and corrupt, so her campaign is all about trying to affix her faults to her competition. It might have worked, before the Internet.

The Clinton Campaign is morally and ethically bankrupt. So is the DNC. The good news is that the voters have a say in the composition of the Democratic Party, and an opportunity to throw at least some of the bums out, every two years, just as the Republicans do.

Yet you right readily forgive the same behavior in Der Donald.

I rightly call that “hypocrisy”. You don’t hove to the standards you espouse. You just mouth them.

JB Rags, give it a break. I see you are still going at it. I check this site out less and less thanks to you.

Your boy Teddy Cruz apparently has hypocrisy too, though.

Some people realize that we have to vote lesser of two evils.

Like so many words, you don’t understand the meaning of the term.

Hmm, can you say Canadian born…

MarkSmith, can you say blow me?

As soon as you get that thing out of your mouth.