The FBI denies any conflict of interest. 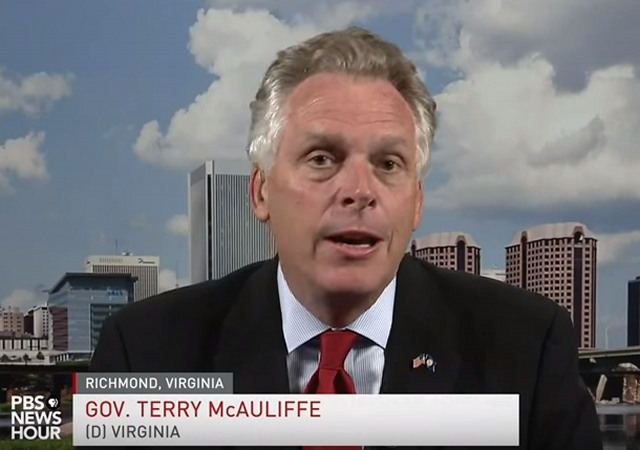 The Virginia Democratic Party, over which Mr. McAuliffe exerts considerable control, donated an additional $207,788 worth of support to Dr. McCabe’s campaign in the form of mailers, according to the records. That adds up to slightly more than $675,000 to her candidacy from entities either directly under Mr. McAuliffe’s control or strongly influenced by him. The figure represents more than a third of all the campaign funds Dr. McCabe raised in the effort.

The McCabes met with McAuliffe on March 7, 2015. At the meeting, the governor urged Dr. McCabe to run against incumbent Republican Dick Black. Afterwards,  Agent McCabe met with his bosses at the FBI:

FBI officials said that after that meeting with the governor in Richmond on March 7, Mr. McCabe sought ethics advice from the bureau and followed it, avoiding involvement with public corruption cases in Virginia, and avoiding any campaign activity or events.

“Once I decided to run,” Dr. McCabe said, “my husband had no formal role in my campaign other than to be a supportive husband to me and our children. As a federal official…everyone who participated in our campaign understood and respected that he could not participate.”

The FBI has also said that during Dr. McCabe’s campaign, Agent McCabe “played no role, attended no events, and did not participate in fundraising or support of any kind.”

The PAC began handing over the money “two months after the FBI investigation into Clinton began in July 2015.”

The department promoted McCabe to deputy director months after Dr. McCabe’s campaign ended when she lost to Sen. Black. That is when “he assumed for the first time, an oversight role in the investigation into Secretary Clinton’s emails.” Still, no questions came up about conflicts:

Mr. McCabe’s supervision of the Clinton email case in 2016 wasn’t seen as a conflict or an ethics issue because his wife’s campaign was over by then and Mr. McAuliffe wasn’t part of the email probe, officials said.

FBI officials also said that the final decisions on the investigation came from FBI Director James Comey. However, he came under fire when he announced he would not recommend charges against Hillary or her staff even though the agents found she was extremely careless with classified information on her private email server.

McAuliffe chose to support McCabe “because he believed she would be a good state senator. This is a customary practice for Virginia governors… Any insinuation that his support was tied to anything other than his desire to elect candidates who would help pass his agenda is ridiculous.”

McAuliffe allied himself with the Clintons in the 1990s when President Bill Clinton chose him as chief fundraiser. He remained close to the family and even chaired Hillary’s campaign in 2008.

I’m too old. I remember when the FBI was a respected organization. Now they’re just another victim of the Obama/Clinton legacy of corruption.

Kaffa, sounds more like they were a willing victim.

There’s a very ugly term for a woman that compromises her principles for money; what do we call a guy that does it?

I see from your shoulder patch logo you used to belong to the same agency I did. Can you imagine what the Army would have done to us if we pulled these kind of security breaches?

1. the disjunction in time relative to Agent McCabe’s oversight role, and

2. the missing link showing that anything McCabe did was helpful to Hellary.

My understanding was that the investigation returned a LOT of stuff (as Comey said in July), AND that the short-stopping of the process was on Comey.

In these days of dishonest politicians (but I repeat myself), the quid comes before the pro quo. The McAuliffe PAC certainly seems to be greasing the skids for a future favor, and by amazing coincidence, McCabe winds up in a position to pay back that half-million bribe… I mean contribution.

Could he have (perchance) *requested* the position in order to pay off his debt to the mob? I mean Democrats. (easy mistake to make)

The mob routinely paid up front for favors to be specified and collected on at a later time — an insurance policy of sorts. Your point was what I thought about when I first read this story.

Well, I certainly don’t want to sound like I’m supporting or even justifying anything a Democrat does. But the fact is that there’s nothing terribly unethical about donating to a campaign fund. It’s unethical to pay for specific political favors or paybacks, but contributing to someone whose work you think you’ll like or who you think will contribute to The Cause (whatever your cause might be) is perfectly OK.

And so I thought about this case; there’s a hint of smoke coming from that gun, but compared to almost anything else the past few weeks, it’s not much to get excited about. Lacking an e-mail from Podesta saying something like, “OK, relax, everybody, we’ve paid him off,” there doesn’t seem to be much of a trail to follow here.

Or so I believed until I saw this—

Any insinuation that his support was tied to anything other than his desire to elect candidates who would help pass his agenda is ridiculous.”

It is not ridiculous. “Ridiculous” would be an assertion that somebody won an election by sticking pins into a voodoo doll of his opponent, or a claim that someone’s not legally qualified for an office because he was born long ago in a galaxy far, far away. But questions about lies or corruption by a Democrat? Nothing even slightly ridiculous about it. Short of solid evidence, nothing says liar quite as clearly as the insistence that a perfectly reasonable suspicion is “ridiculous”.

Let me show you my tax returns.

Oh, and the lame excuse is that, after the wife’s campaign got the McAuliffe half a mil, “months” went by before the husband got the FBI assignment to oversee the Hillary email investigation.

Months, do you hear? As in “what have you done for me lately?”

Of course there’s nothing to see here. Because, months. No one after the expiration of mere months could possibly have been influenced by his wife having been given $500,000 by a close crony of the target under investigation. No one.

It stinks because it is corruption. There is no government agency untouched by massive corruption.

1) Ethical people go out of their way to avoid the appearance of doing anything unethical.

2) The Democrats want us to judge each situation in isolation of all of the other situations. Just as a defense attorney does not want the jury to connect the circumstantial dots, the Democrats do not want us to see the clear and consistent pattern of corruption. They will argue the facts here in isolation. We do not need a “beyond a reasonable doubt” conclusion to cast a vote or see what is clear and consistent.

Once again I have to say “Nothing to see here. Move along.”

It’s a cesspool. No one should be surprised. The corruption pervades every aspect of the apparatchik. I’m not sure it can ever be fixed. The longer it takes to address it, the worse it will be.

Think of us as the innocent passengers on the Titanic. And the tip of the iceberg is what Wikileaks and other sources of info have revealed to us in the past few months. That is where we are right now and we all know what comes next. My God! How can we sit by and allow these corrupt people to do this to our country? They don’t even pretend any longer. They know they will get away with anything they do and the msm applauds them. I thought the internet would open the eyes of the politically blind but boy was I wrong. If the clinton’s can do this BEFORE she takes the WH imagine what they will do then!

To which I say: So what? It’s an immaterial fact.

McAuliffe is a piece of gutter trash! Don’t think this happened by chance.

Forget Clinton for a moment (I wish I could forget the whole bunch forever). The FBI started its investigation into McCauliffe’s own likely corruption investigation in 2013. Well before McCauliffe donated that money to his wife’s campaign.

“…West Legend is a New Jersey-based affiliate of Rilin Enterprises, a Chinese company that in 2013 pledged to donate $2 million to the Clinton Foundation. The foundation’s website says Rilin has given between $1 million and $5 million.

McAuliffe came under scrutiny during his gubernatorial run after it was revealed that Clinton’s brother Anthony Rodham had used an investment firm he ran to funnel money from a controversial U.S. visa program into McAuliffe’s electric car company.

Then-Secretary of State Clinton ran the agency charged with overseeing the visa program, which benefited investors in U.S. companies…”

Can somebody ask James Comey if there’s anything unethical about a potential target of an FBI investigation giving $500k to the campaign of the wife of the no. 2 man at the Federal Bureau of Incoherence? Especially since Rilin Enterprises has many ties to the Chinese government, including the Ministry of State Security.

Also, Dr. McCabe’s campaign apparently took in $1.5M toatal. Something is deeply screwed up when people will spend that kind of money for an $18k/year state Senate seat.