Halperin Hints Trump Might Be Planning ‘Revelation’ About Hillary

Halperin Hints Trump Might Be Planning ‘Revelation’ About Hillary

Could Make Trump Tax Leak Look Like a ‘Little Appetizer’ 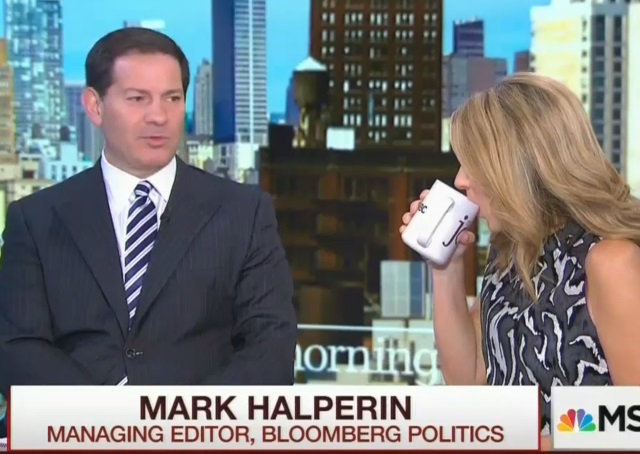 This Insurrectionist finds Mark Halperin to be among the most cautious and level-headed of pundits. The With All Due Respect host typically avoids wild speculation and is generally of the on-the-one-hand and on the other school of analysis.

So it was striking that on today’s Morning Joe, Halperin, with some prodding from Joe Scarborough, suggested that Donald Trump might be planning a big October surprise in the nature of a “revelation” about Hillary Clinton. One sensed that Halperin had some inside knowledge of the situation, though all he mentioned in support of his theory is that Trump is surrounded by people such as David Bossie, who has spent a quarter-century investigating the Clintons’ personal lives.

Note: His sober mien notwithstanding, Halperin does occasionally have his wild hair, as when he was once suspended for calling President Obama a “dick.’

JOE SCARBOROUGH: So Trump, what’s he up to? Is Trump leading up to something? I know you can’t say it on TV. But is he, is he —

NICOLLE WALLACE: Oh come on, give a little!

JOE: Is there going to be a conspiracy theory that Trump’s building up to?

MARK HALPERIN: Look who’s around Donald Trump right now. Dave Bossie who, you know, has investigated the Clintons for —

WALLACE: Explain who these people are.

JOE: So you’re saying that Trump is planning to come out with some revelation?

HALPERIN: I think he’s tempted to. And he said it at the debate. He said he would say something at the debate and then he decided at the last minute not to.

WALLACE: And he spent seven days talking about it.

HALPERIN: So between that and the Wikileaks thing —

JOE: You think there’s a build-up —

HALPERIN: Well, there’s just a possibility that the October surprise of the tax returns is going to be like the little appetizer—on both sides.

“I have people that have been studying it and they cannot believe what they’re finding,” Trump said.
http://politicalticker.blogs.cnn.com/2011/04/07/trump-sends-investigators-to-hawaii-to-look-into-obama/

Let’s hope so. There is also Assange and his release.

I’ve been hearing about this Assange blockbuster he’s about to lay on us tomorrow for about the last month and a half.

If a candidate’s future depends on help from an America-hating criminal Putin stooge like Assange, doesn’t that say more about the candidate himself than about whatever supposed dirt Assange has?

As I recall, Assange also teased that the Snowden releases were the “tip of the iceberg” for months, with nothing to follow. He did keep the America-hating money flowing in, though.

Leaking is much like the news business: sitting on information doesn’t work for very long. If Assange had anything new of import, we would already know

Winning clearly does not depend upon intelligence, coherency, substantive knowledge, or a consistent view of the role of government. The American people have allowed their elections to depend of events such as those you decry.

HRC is completely and utterly unelectable! Can you imagine a Republican with a fraction of the dirt that the Clintons have ever getting anywhere near running for President?

I guarantee your left testicle (if you are a female democrat voter of course) that the media would be EXTREMELY interested in that persons history.

“Can you imagine a Republican with a fraction of the dirt that the Clintons have ever getting anywhere near running for President?”

What makes that such a clever trick question, in light of all the dirt on Der Donald, is that he’s a Collectivist, not even a Republican.

“We were in the boardroom one time figuring out who to blame for the task, and he just stopped in the middle and pointed to someone and said, ‘You’d f… her, wouldn’t you? I’d f… her. C’mon, wouldn’t you?'”

The person continued: “Everyone is trying to make him stop talking, and the woman is shrinking in her seat.”

Given that the October Surprise has become a cliche, and given Trump’s penchant for flipping things around on the MSM/Dems, it would be really surprising if he weren’t planning an October Surprise of some sort.

Even if it’s just a new line of ads laying out the ridiculously vast sums foreign governments and corporations “gave” to the Clinton Foundation while Hillary was Secretary of State — i.e. something that wouldn’t be a “Surprise” for anyone who reads blogs, but that hasn’t really deeply penetrated the awareness of the “middle voters” who will decide this election.

“planning an October Surprise ” Trump is capable of planning? Why didn’t he plan for the debate. That certainly was the September surprise!

Given the text of this piece, let’s look at what we already know about hillary. She is basically a Communist. She has no allegiance to our country or any of its laws. She is a pathological liar. She is a stock market cheat. She is a rapist enabler. She is a traitor to our country. She is deceptive and untrustworthy. There are so many other things that she has done that to try and imagine one “New” scandal that will bring her down is just wishful thinking. We are looking at the bottom of the barrel of human integrity and ethics. Why do you think that one more “Blockbuster” is going to ruin her? Could it be that she is a rug eater? Or a traitor, oh wait, she is already. That she is a murder? Oh wait, she already is at least five times, counting Foster’s suicide, and maybe many more thanks to her private server. Her sellout to Wall Street? So tell me what you think would be so much worse than this that it would “Ruin” her chance to become president? I’m not holding my breath!

You throw “traitor’ around rather cavalierly.

What does it mean to be “basically a Communist”? Is she one or nor?

Yes, of course. The entire democrat party is a communist criminal enterprise. Followed closely by the republican party, but not by all republicans.

Communist is just an epithet to you. Why not Jacobite or illegitimate daughter of a notorious woman? I do hope you are amusing your self, because you aren’t persuading anyone.

To put your hope in Julian Assuage and Putin is pathetic. Talk about a deal with the devil!

Besides all is not known about Master Trump. The Clintons invented the War Room. I am sure they can roll out a story a week between now and the election. Trump will be lucky if he has a tie to sell after the election. There are so many areas of criminal investigation to be explored. I hope they pursue them all.

Those of us who live in NY have been around Trump all our lives. We would be hard to surprise. But the rest of the country is unfamiliar with many a juicy story.

“Communist is just an epithet to you. Why not Jacobite or illegitimate daughter of a notorious woman? I do hope you are amusing your self, because you aren’t persuading anyone.”

Communist is what communist does. The commies have always been crooks along with there embrace of the communist doctrine. That is the current democrat party. Asking “why not” something else is mere deflection.

“To put your hope in Julian Assuage and Putin is pathetic.”

I placed no such hope. And you can find no comment regarding such by me. Another attempt at deflection. You just make stuff up.

“Besides all is not known about Master Trump.”

Not all is known about Clinton, or you, or anyone else. So what?

“Those of us who live in NY have been around Trump all our lives. We would be hard to surprise. But the rest of the country is unfamiliar with many a juicy story.”

Give us some of those “juicy” stories. There are plenty of the opposite.

You asked a question. “Is she one or nor?” I gave an answer. Your response is just a pathetic attempt to deflect the truth. Clinton is a crook and a commie at heart. The entire democrat party is built upon corruption and Alinsky principal. Truthful people can see that. It has nothing to do with Trump.

That an October surprise may be planned by a campaign is a pretty safe prediction for any campaign in any election in any year.

Could Make Trump Tax Leak Look Like a ‘Little Appetizer’

A leak which reveals an activity which was

would be an “appetizer” of what, exactly? Aside from a full banquet of the chef’s specialty recipe: Nothingburgers.

Sleazy? Everything about the man is sleazy. His mouth; his comments about his daughter; his labeling of whole groups as rapists and criminals – but I gather you are an out and out racist. So you probably don’t see it.

Actually the NYT did reveal illegal activity. On their part and probably Hillary’s in obtaining those records.

In a sense Trump is unassailable for one basic reason. We already know his warts. He hasn’t bothered to hide them. Whatever is there is already known, and many have already discounted it.

Julien Assange’s next Wikileak is supposed to be this week.