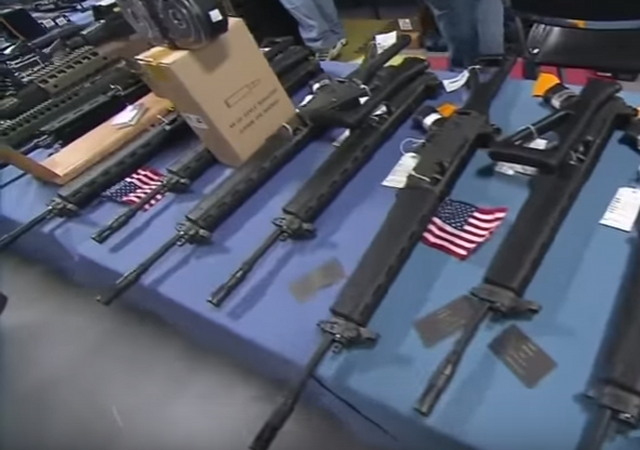 2016 has been an amazing year for gun sales and September was an all time record breaker. Maybe people are worried that Obama may use his last few months in office to infringe their gun rights?

Gun sales hit the 17th consecutive monthly record in September according to FBI data released on Monday, and overall sales are up 27 percent compared to the same period last year.

A total of 1,992,219 background checks were processed through the bureau’s National Instant Criminal Background Check System for the month of September, higher than the 1,795,102 conducted in September 2015.

The number of checks run through the FBI’s NICS system is a reliable indicator of how firearm sales are trending, though there is no precise correlation between the number of checks and the number of guns being sold. Licensed dealers are required to run a check in the database every time they make a sale, but sometimes turn buyers down.

Sales have surged in the wake of ammunition shortages and fears that the Obama administration may seek to restrict Second Amendment rights in the president’s waning days in office. Experts say the equipment being sold indicates interest has spiked out of growing interest in self-defense and hunting.

Terror attacks such as the one in Orlando and the recent shooting at a shopping mall in Washington State are undoubtedly driving these record sales as well.

The FBI uses the NICS to gauge just how strong gun activity is across the nation. It’s considered to be one of the most accurate ways of judging the number of gun purchases are made on a monthly basis.

“Sales of handguns and AR’s have been very strong for the past two months. Hunting rifles have been about average for this time of year,” said Scott Blick, a managing partner at Ammunition Depot. “Ammunition sales are definitely following that pattern with sales of 9mm ammo and .223 ammo being extremely strong.”

People are buying ammunition in bulk because of the possibility that come 2017, ammo will be more expensive and harder to find.

The NRA should thank Obama.

As president, he turned out to be the world’s greatest gun salesman.

And those guys selling Molan Labe tee shirts must be getting rich too.

Sales are going to go up even further, especially if this story pans out.

If Trump doesn’t win, you’ll see the government try to get them back. And you’ll see a civil war.

Glenn needs to go back on his hunger strike or maybe get loser tattooed on his forehead.

California is going the strangle ammunition mode and banning sale of all semi-autos with mags… even 100 year old Remington and Winchesters (Model 8 and 10)…. again restricting law abiding knowing criminals don’t care. It’s a great scam… use crime to justify restrictions knowing full well this has nothing to do with crime and all with people control. Both recent murders of cops in CA by felons… so what is new? Felons love the Left… kindred spirits.

Some of the ammunition restriction provisions are completely unenforceable. Drive to a border state, purchase ammunition, return to California and no one is going to know. I have relatives who live in California who know I’d be more than happy to facilitate bulk order ammunition purchases. There will be no receipt and no way to prove when it was acquired.

Until CA has cops running checkpoints at the border. And I hope you don’t use anything but cash, including on the trip.

I guess you didn’t realized that California has perfect laws. It is always someone else’s fault that the urine colored state has unenforceable laws. But the Left views civil disobedience to their laws as fully criminal. This all started with Oregon letting Patrick Purdy off the hook and his shooting up a school in Cali….. The Left fostered discord to reap its benefits. This law is set to fail to usher in newer more stringent laws. Orwellian yes…. but when did reality enter into the Left’s utopian plans?

I agree with you that, in practice, that will be – and is – what happens.

The long-term effect on us, culturally, of criminalizing formerly law-abiding, decent people is what gives me pause. The criminal class disregards the law and now decent people don’t respect it; where does that leave us? With anarchy? Makes for a really cool plot for a novel or a movie, but living it would be less entertaining.

Wonder what happens when Hill, after completing the institutionalized criminalization of the federal government, tries to move on gun confiscation?

Since she’s smarter than the rest of us, I figure she uses tax policy to go after ammunition sales. And who in Washington is going to oppose her? Ryan? McConnell?

She will fold it into some Chamber of Commerce friendly immigration “reform” and that should be enough to bait Beltway Republicans.

I never wanted an assault rifle. But since California is outlawing new purchases at the end of the year, I went out and bought one last week. If their goal was to reduce assault weapon ownership, it’s having the opposite effect.

Interesting. I suspect that this effect is widespread.

I’ve been fiddling with guns for three decades, have state and federal licensing to buy/sell/ship them, am a member of several clubs/ranges, etc … so I know a lot of gun owners, shooters, collectors, dealers, and just general gun hobbyists/cranks. And every one of them that I personally know who has rifles of the dreaded AK or AR patterns bought them specifically because the government was threatening future availability. They bought them for resale (and bought more than one, too), confident that the value would increase after supply was restricted, or for themselves, simply because they might be interested in one in the future but their minds were made up prematurely by impending government action.

As an illustration of the futility of the totalitarian prohibitionist dream, gun control is a hard example to top.

Boxty, don’t let the gun-grabbers control the language with their lies! You did not buy an “assault rifle”; you bought a semi-automatic rifle that is incapable of fully automatic fire; i.e. it is not a machine gun. The odds are that you purchased an AR-15**, which superficially resembles an assault rifle, the same way a Continental Kit makes a VW bug resemble a luxury car but neither one functions like what they only resemble.

BTW, you cannot legally buy a real assault rifle in any case. All automatic weapons have been under the National Firearms Act (NFA) since 1934 and require a $200 license fee and a background check that takes upwards of six months to complete, and that $200 is non-refundable if you are turned down. On top of that it is now illegal to purchase such a weapon that was manufactured after 1986, which has driven the average price for one of the older guns up to a starting threshold of about $15,000!

So, don’t let the liberal, progressive gun-grabbers control the discussion by controlling the language used for that discussion. You are now the proud owner of a Modern Sporting Rifle (MSR) which is not now and never has been a military “assault rifle” and anyone who claims it is is either misinformed, or lying in support of an agenda. And while average people may be misinformed, Obama, Clinton, Schumer, and all the rest know the truth, which puts them firmly in the liar category!!

**There is another pernicious lie floating around saying the “AR” in AR-15 stands for “assault rifle”. Horse feathers and stronger expletives! It stands for the first two letters of Armalite, the company that Eugene Stoner worked for when he designed this ground-breaking light weight rifle. The company used that naming convention for all of the weapons they designed and marketed, including the AR-7, a rifle chambered in the lowly .22 Long Rifle cartridge whose barrel, action, and magazine all come apart and stow in the (somewhat) water proof butt stock. It was intended for the military, to be issued to pilots but they didn’t buy it, Now, decades later, it is now being sold by the Henry company and is a staple with many who spend time in the tall timber.
https://www.henryrifles.com/rifles/u-s-survival-ar-7
But definitely not an “assault rifle”!

AND they make nice hunting weapons for those of us who may be a bit lacking in upper body strength (darn that second X chromosome!)

Why stop at one, go buy two!

Or an AR and a Tavor aka The Hebrew Hammer.

September was a good month. I added two to the stable, 12 gauge semi-auto 10 shot shotgun (mossberg) and a new pistol, S&W MP 40. I luv them both. The shotgun is just tremendous, shoots as fast as you can pull the trigger, 10 shots on target at 30 yards in <5 seconds. Faster if you really want it. The pistol is deadly as well. 15 in the magazine. Faster than greased lightning.

Every one should own a defensive weapon IMO. And get trained.

Forgot to add, I think it is less Obama’s last days, more that shrillary might get elected, appoint the next judge, and the battle is over. I guarantee you that as soon as she gets her judge on the court, there will be case after case coming before them and we’ll lose every case.

Stock up now, the end is near 🙂

One last comment – if you think the bedwetters in the GOP are going to hold up a Clinton nominee, for 4 years, I have abridge in Brooklyn for sale.

An armed society is a polite society.

This year I bought a Glock 19 from a retiring cop friend and a .22 plinker semi-auto rifle to replace the one I gave to a grandson.

I lost all of my guns in a boating accident.

You wouldn’t happen to live in California, would you? (If so, you have my sympathies, you poor man!)