Gun Control Measures on the Ballot in Four States

Gun Control Measures on the Ballot in Four States 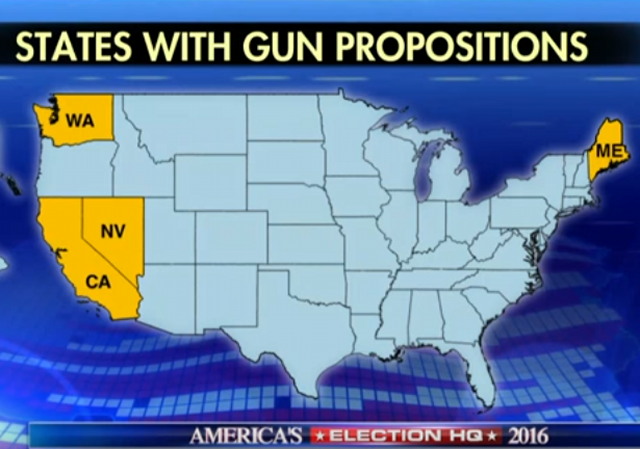 Gun control is an issue which has somehow gotten lost in the coverage of the election. Not many people are talking about it but it’s actually on the ballot in four states.

The last time voters in Maine were asked about gun rights, they easily passed a constitutional amendment creating a right to own firearms that “shall never be questioned.”

Three decades later, the state known for its hunting tradition will vote on whether to tighten restrictions on gun sales and transfers.

Maine is one of four states, along with California, Nevada and Washington, where voters will decide Nov. 8 whether to enact tougher firearms laws. In a change from past elections, there are no statewide initiatives seeking to expand gun rights anywhere in the U.S.

The presence of so many ballot questions in the same year reflects the strategy, growing power and deep pockets of gun-control supporters, who are outspending opponents in all four states. They hope passage of the proposals shows widening support for more measures designed to keep firearms away from dangerous people.

In Maine and Nevada, a group founded by former New York City Mayor Michael Bloomberg has spent millions advocating for background checks on nearly all gun sales and transfers. Supporters want to close gaps in the federal system that allow ineligible felons, domestic abusers and the mentally ill to buy firearms from private sellers at gun shows and online without a background check…

In Washington state, advocates who successfully campaigned for a background check law in 2014 are now seeking passage of a measure that would allow judges to issue orders temporarily seizing guns from people who are deemed a threat. For instance, concerned families could seek the removal of guns from relatives threatening to harm themselves or others.

California’s Democratic lieutenant governor, Gavin Newsom, is leading the campaign for a first-of-its-kind law that would require anyone buying ammunition to pass a background check and obtain a state permit.

A recent report from the Washington Free Beacon suggests this is still not a winning issue:

A poll published on Wednesday shows record opposition to gun bans from the American public.

The survey, conducted by Gallup, found 76 percent of respondents thought there should not be a law banning civilian ownership of handguns, a four-point increase from last year and an all-time high in the 57 years the question has been asked.

The poll also found that 61 percent of respondents are “against” a ban on certain semi-automatic rifles—often referred to as “assault weapons”—, a ten-point increase since the last time the poll was taken and an all-time high since Gallup began asking the question in 1996.

Support for the gun bans are at all-time lows. The poll shows only 27 percent support for a ban on handgun ownership, a three-point drop from last year. It also shows support for an assault weapons ban at 36 percent, an eight-point decline from the last time the question was asked.

Doesn’t gun banning legislation up for statewide votes normally wind up driving a larger Republican turnout? CA is ‘Winner take all’ so turnout is a lost cause there for the Presidential election, but it may drive a few more Representatives the R way. Not sure about the other states and their Trump/Hillary numbers since I’m not *that* much of a poli-geek.

Only one problem – California’s “Top Two” primary system means a lot of districts have no (R) candidates on the ballot.

“Only one problem – California’s “Top Two” primary system means a lot of districts have no (R) candidates on the ballot.”

Not sure about the local polls in NV vs. national polls on gun control support, but I would think that is the only tactical mistake here by the Dems. That’s a close state in the polling and it absolutely will drive 2nd A supporters to the poll.

Whether they 2A Democrats are going to cross lines – in MI, OH, PA, a subset definitely will.

As for whether it will drive more Repubs vs Dems, I lean to Repubs. I don’t see this as enough of a get-out-the-base issue for Dems.

CA, WA are decided and ME splits its districts.

He puts his left foot in…spends a LOT of money…and comes a cropper.

When will Bloomberg (known locally by his Indian name, Blooming Idiot) disarm his protection detail?

I wonder if most Mainers know more than 40 states are going in the other direction and U.S. crime rates are at historic lows and continue to plummet. I also wonder if they know the trend to greater safety is in spite of the growing murder rates in big cities where gun laws are draconian and have been tightening for years.

Gun control is an issue which has somehow gotten lost in the coverage of the election. Not many people are talking about it but it’s actually on the ballot in four states.

True. And the reason why is given later in the article.

A recent report from the Washington Free Beacon suggests this is still not a winning issue.

That’s why the MSM is not talking about it, at least (the New Media is another story entirely). That’s the reason behind the first paragraph.

The MSM knows “gun control” is not a winning issue, but they also know Hillary, as President, will make it a priority. The MSM wants “gun control” as much as Hillary does, and they know Hillary won’t not talk about it, so their only option is to downplay it or spike the story altogether.

To make an analogy: Hillary wants “gun control”, but she’s not (yet) going “under the radar” to get it. The MSM — thanks to the Internet and the New Media — no longer controls the on/off switch, so instead they are doing everything they can to silence the warning pings and alarms.

Make no mistake, “gun control” is on the ballot next week, whether the MSM is willing to report it or not.

Maine Nevada and Washington are very good pro 2nd amendment states. This is surprising. California has been a gun control state since Ronald”Mr NRA life member”Reagan signed the Mulford Act.

We doan allow that chit on th’ ballot down here in No’th Cackalacky.

I’m surprised the anti-gunners in ME and WA aren’t going after low-hanging fruit like open carry.

On the contrary, these measures are NOT “designed to keep firearms away from dangerous people”, but are worded to give that impression. They are, in fact, designed to subvert the rights of the people to engage in private commerce involving firearms, with the idea that no gun can be unregistered in private hands, effectively contributing to the creation/maintenance of a national gun-owners database. Those forms you fill out to purchase a firearm at a retailer to authorize a NICS background check? They’re supposed to be destroyed after the purchase is completed, but recent details indicate that they’re NOT being destroyed but retained.