They also had to chant “there is no God but Allah” 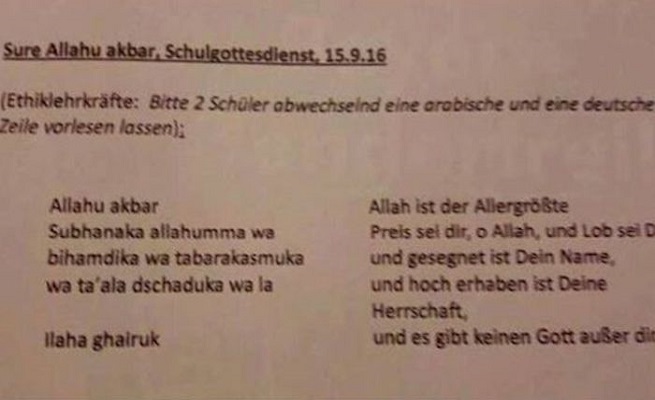 A small child taking an “ethics” lesson at her primary school told her father that she and her classmates were forced to chant an Islamic prayer in class.

The father of the pupil at the girl’s primary school in German ski resort Garmisch-Partenkirchen discovered that his daughter had been forced to learn the Islamic prayer when he discovered a handout she had been given.

He claimed she had been “forced” by teachers to memorise the Islamic chants and forwarded the handout to Austrian news service unsertirol24.

The handout read: “Oh Allah, how perfect you are and praise be to you. Blessed is your name, and exalted is your majesty. There is no God but you.”

It had been given to the girl during a lesson in “ethics” at the Bavarian school.

Headteacher Gisela Herl did not confirm the incident when questioned, but said the school would issue a written statement detailing its position in the coming week.