Charged with two counts of first degree murder, one count of attempted murder 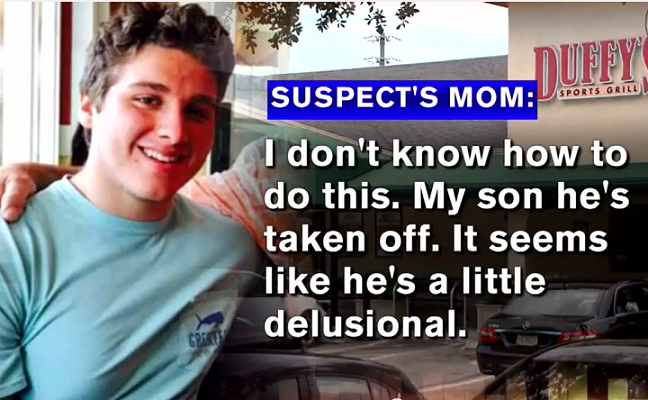 The FSU frat boy who was found chewing on the faces of an elderly couple in their driveway has been charged with first degree murder and could face the death penalty.

The Florida frat boy who cops say was found gnawing off pieces of a victim’s face has been charged with murder more than a month and a half since he allegedly killed two strangers and maimed a third.

Austin Harrouff, 19, was either in a coma or unable to speak for most of his stay at St. Mary’s Hospital, leaving authorities unable to question him about the April 15 incident that left Michelle Karen Mishcon, 53, and her husband Joseph Stevens III, 59, dead in their driveway.

. . . . He’s been charged with two counts of first-degree murder and one count of attempted murder and has no bond.

Harrouff was out to dinner with his parents when the young man stormed out of the restaurant, apparently angry over slow service.

Concerned about his behavior, the teen’s family called police and his fraternity brothers of FSU’s Alpha Delta Phi to help find him.

Police responding to a 911 call of a gruesome attack found Harrouff after he had allegedly stabbed Mishcon, 53, and Stevens, 59, to death as they sat in their Tequesta driveway. Investigators believe the attack was random.

Cops say he also attacked a good Samaritan who called 911 when he stumbled upon Harrouff biting Stevens’ face and stomach. That victim was airlifted to a nearby hospital, where he was treated and released after several days.

Elderly couple? They were in their fifties. Especially in Florida, that’s not elderly.

My thought, too. In what world is 50-ish “elderly”? Maybe to teens and younger children, but really….

Just wait, Fuzzy, it’ll catch up to you too before you know it ~

LOL, wcgreen and nordic prince. You’re absolutely right, I should have said “middle-aged” rather than elderly. My bad.

I’m a bit confused. The video reported that the tests for other hallucinogenics would take longer to get back from the lab. The kid has been in a coma for a month. How long do these tests take?