An odorous hint of America’s future under Hillary’s presidency if she is elected! 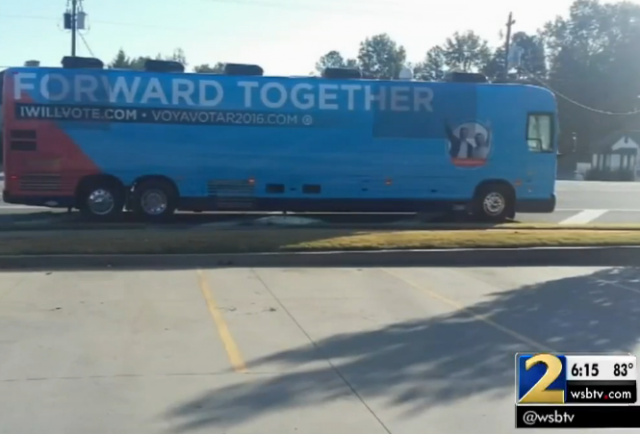 If there was ever an omen about America’s possible future based on the outcome of Election 2016, then an incident occurring in a small town in Georgia is surely it!

According to the police report, authorities were called to the O’Reilly Auto Parts on Grayson Highway after reports that an RV was dumping its sewage into a storm drain.

A store employee told police that he watched an RV affiliated with the Democratic National Committee stop in the turn lane of Grayson Highway in front of the store.

The employee says he watched someone get out of the RV and open the sewage drain. Raw sewage then spilled onto the roadway and into the storm drain.

The fact that Team Clinton dumped the sewage into a storm drain is especially disturbing, since those drains flow into streams and rivers that find their way to the ocean. Not only are aquatic plants and animals impacted by the possible pathogens from human excrement, but those using the waterways are at risk. This is the reason Southern California beaches are closed when there is an accidental sewage release into the ocean from adjacent Tijuana!

As a potentially hazardous material, appropriately trained personnel were called to respond.

Hazmat crews in Gwinnett County were called to clean up waste left behind by a Democratic National Committee bus.

….The officer stated that a large amount of drying toilet paper was on the roadway where the RV had been and a “foul smell” was left in the air.

Those HazMat teams cost about $1000/hour for response (at least in California). I sure hope they charge the Clinton campaign for their costs. Should she be elected, Hillary Clinton will be charging Georgia taxpayers more than enough in the future.

There is a concept called “broken windows policing” that theorizes that those who break small laws break are more inclined to break more serious ones. This incident is just another indication of the lack of respect for the rule of law that we experience under Hillary Clinton and her minions if she is elected. I shudder to think about the serious laws Team Clinton has yet to break.

Looking to the past, Obama has clearly used his office as a footstool. Peering into the future, Clinton will use hers as a toilet...if we let her!

Peering into the future, Clinton will use hers as a toilet…if we let her!

And we now have a picture of what the oval office will look and smell like with the seat down!

Beyond the pale disgusting!!!!

I need a shower…

This only confirms that Hacking Hillary is full of…

What? The hildebeast got off a bus in Ga?

Cousin Eddie did the same thing, I don’t see what all the ruckus is about…

Oh, c’mon. We all know the Democrats’ sh!t don’t stink!

Well hey what do you expect?
Illary’s colonoscopy bad was overflowing.

Your stuff becomes more and more a parody of a T-rump fan-gurl, Leslie.

That’s a “small town in Georgia” like Spring is a small town in Texas. As in, it isn’t. It’s a suburb of Atlanta.

Every Boy Scout who’s ever been camping in the real wild has done the same or worse.

RV’s almost always treat their sewage tanks with “blue stuff” which is mostly formaldehyde, which denatures almost all microorganisms.

The dogs, cats, raccoons, and other critters legion in the area contribute WAY more crap than any passing humans COULD.

So, it was a stupid, careless, unnecessary thing to do, but it wasn’t anything to hyperventilate about.

Leave it to a Hillary socialist democrat to make excuses for the partys actions. I thought the democratic socialists were all for “saving the environment”. In case you didn’t know it, commercial sewage waste dumping can be a felony and up to $25,000 a day fine.

“So, it was a stupid, careless, unnecessary thing to do, but it wasn’t anything to hyperventilate about.”

Leave it to a scientific idiot and T-rump sucking ThoughtPoliceman to call me totally unsupportable names for any act of ThoughtCrime.

Turns out the Dave Matthews band was fined $200,000 for the same thing. http://www.billboard.com/articles/news/63070/dave-matthews-band-settles-bus-waste-case

“The Dave Matthews Band, settling a lawsuit stemming from human waste dumped from a tour bus onto people touring the Chicago River, has agreed to pay $200,000 to an environmental fund and take measures to avoid a repeat of the incident, the Illinois attorney general said.

The bus was crossing a bridge last summer when the waste poured through metal grates onto the open deck of an architectural tour boat carrying more than 100 passengers. The agreement with Attorney General Lisa Madigan does not settle several personal-injury lawsuits that also have been filed.”

“Authorities said there were no reports that anyone developed infections or diseases.”

So, except of almost everything, these two instances are JUST alike…

Sure lets not check the applicable laws before dumping waste. Ignorance of the law excuses no one. There are places that you bring a vehicle to clean out the tanks, they are easy enough to find and the properly licensed driver would know this. Add to the fact that they didn’t dump it in the drain itself but on the ground near it and then left the mess there for someone else to clean up shows a serious lack of common sense and concern for others.
Discarded feces is a serious issue for a lot of people, the arguments that break out just over dog droppings on lawns shows you that. It can also be used as a symbolic attack against a candidate, this is something that an election should never let happen. It doesn’t matter who was “in” the bus/RV what matters is who was “on” it. Even a dumb PR hack will grab this and run with it “Here’s Hillary dumping on the people or dumping on the laws” a good PR hack will tie this to the occupy movement and how they trash everyplace they occupy.

“Your stuff becomes more and more a parody of a T-rump fan-gurl, Leslie.”

There’s no need to attack Leslie.

When I was a scout we were taught to dig a hole and bury everything, to leave the environment like we found it.

So no, scouts don’t leave streams of piss, turds, toilet paper, sanitary napkins and blue sludge in the gutter.

My, my, you WERE a fastidious lil’ “scout”. Did you extend your pinky while you squatted to piss? Nobody in my scout experienced used “sanitary napkins”.

Myself, I’ve pissed on trees, shrubs, grass, sand, and in two oceans and a gulf.

What a nit-picking prig.

A story that forces me to defend Hillary Clinton. Egads.

Hillary Clinton was not on the bus. There is no evidence she phoned in a directive to dump sewage into a street drain. Nothing about this accrues to Hillary Clinton.

They made no attempt whatsoever to hide the dump, suggesting the driver (or whoever said ‘dump it here’) didn’t realize it’s not done that way. If they knew it was wrong, you’d think they’d ‘hide’ behind a Walmart or side trip it out to the country.

This was likely the ignorant decision of the driver and/or crew boss on board thinking, hey, it’s a sewer drain, right? Well, no it’s not, nitwits, it’s a storm drain.

Leslie’s posts are so consistently strong that I believe she got stuck with this ‘story’.

I’m not a lawyer Henry, but I think we can give Leslie a pass and save you from defending hateful hitlery. Leslie did attribute the criminal act to hateful hitlerys’ “minions”. While probably not under direct orders to dump her political promises into the sewer, you can be sure her possible presidency won’t get too far out of the sewer no matter what.

Leslie wrote:
This incident is just another indication of the lack of respect for the rule of law that we experience under Hillary Clinton and her minions if she is elected.

No, you’re not a lawyer. I’m reacting to this:

“An odorous hint of America’s future under Hillary’s presidency if she is elected!”

Given the overwhelming evidence of lawlessness by Hillary’s minions to-date, why should we expect anything different when she is POTUS? Especially now that she is unhinged from any legal oversight.

Whoever pulled the shit dump lever is as close to Hillary as a Trump Tower janitor is to Der Donald. If that janitor litters do we fine Trump? I mean, c’mon!

Henry, there is this cool literary device called a metaphor. You should check it out.

There must have been a real mess because Hillary’s people are just like her…full of shit. Look out when they dump

It’s amazing how quickly #NeverTrump on LI has rushed to Hillary’s defense. Creating scenarios where none was offered, assuming facts not in evidence and engaging in a personal attack on the OP. Yet they claim to hate her as much as they hate Trump.
We all know that if Trump’s bus was the offender, the media story would have been the horrible environmental damage done and Trump’s responsibility for it. And the #NT crowd would have gone along eagerly. Not so when it’s Hillary.

It’s a shame it didn’t happen on the lawn of one of our #NTers. We could have seen first hand how minor incidents like this should be handled. I doubt we will never get an honest answer to that question.

Well, VaPigman, if it had happened on my small acres, it would just have been watered into the grass like the leavings of my Golden Retriver.

Grass likes organic matter, and soil is equipped with a bevy of organisms that just naturally know what to do with it.

You are so funny, with your bullshit lies. Which nature does NOT break down so readily!

Those who choose to believe that answer are free to suspend reality and do so.

For myself, I disbelieve the claim that rags would have that response to the dumping of 20 gals of processed sewerage on his lawn. Totally disbelieve!

Actually, you ignorant liar, people pay to have “sewerage” applied to their land, especially grasslands.

If an RV owner dumped his holding tank in your front yard, your response would be to pay him for the fertilizer and water the lawn.

Not what I said, lying liar.

Typical crap from a T-rump sucking cultist, however.

What’s your plan for when Hellary wins, and your Great God Cheeto eats it?

Precisely what you said, lying liar.

Sure, skip the part where I lament I am forced to defend her. You’ve earned a spot on my Don’t Bother To Read This Clown’s Posts Because You Already Know What He’s Gonna Say. You display a particularly odious brand of intellectual cowardice.

Henry, it’s not that I skipped that part, it’s that I don’t believe it.

LOL. Too much booze, so early in the evening? It makes you so angry that you start babbling nonsense. Cover one eye and read my post again.

This was supposed to be a reply to rags and his juvenile response re: scouts above.