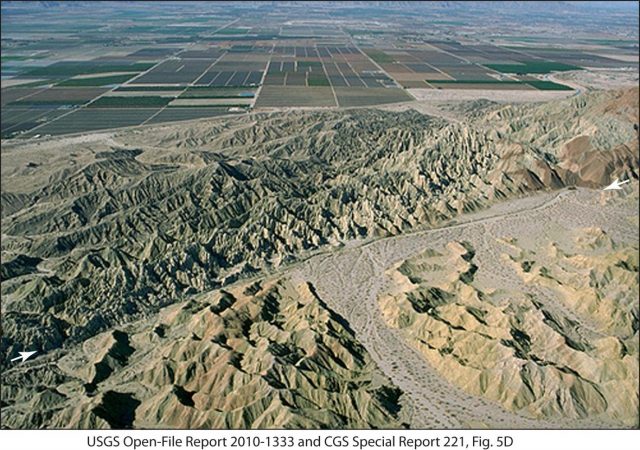 Many Legal Insurrection fans are cheering on #CalExit, whereby California would leave the union.

Mother Nature may be inspired to instigate her own #CalExit, as a swarm of small earthquakes has caused officials to issue an earthquake advisory for the infamous San Andreas Fault.

A swarm of earthquakes that rattled the Salton Sea area earlier this week has increased the probability of a major quake hitting Southern California, CBS Los Ageles reports.

The California Office of Emergency Services (OES) issued an earthquake advisory warning residents and officials in Ventura, San Diego, San Bernardino, Riverside, Orange, Los Angeles, Kern and Imperial counties that there was a greater possibility of a major earthquake through Oct. 4.

More than 140 seismic events have been recorded near Bombay Beach along the Salton Sea – a lake that sits on the San Andreas fault northeast of San Diego – beginning Monday and ranging from magnitude 1.4 to 4.3, according to U.S. Geological Survey (USGS) seismologists.

The level of activity places the risk of a major seismic event “in the worry zone.”

As seismic activity drops, the probability of having a large earthquake also decreases.

Experts said it’s important to understand that the chance of the swarm triggering a big one, while small, was real.

“This is close enough to be in that worry zone,” seismologist Lucy Jones said of the location of the earthquake swarm. “It’s a part of California that the seismologists all watch.”

Second best thing to SMOD for the Krazy Coast…

October 2, and no big one yet. Two days to go. Hope my brother in LA is keeping his phone charged.