Deutsch Defends Anti-Trump MSM Bias: ‘Sometimes There’s No Other Side to an Argument’

Deutsch Defends Anti-Trump MSM Bias: ‘Sometimes There’s No Other Side to an Argument’ 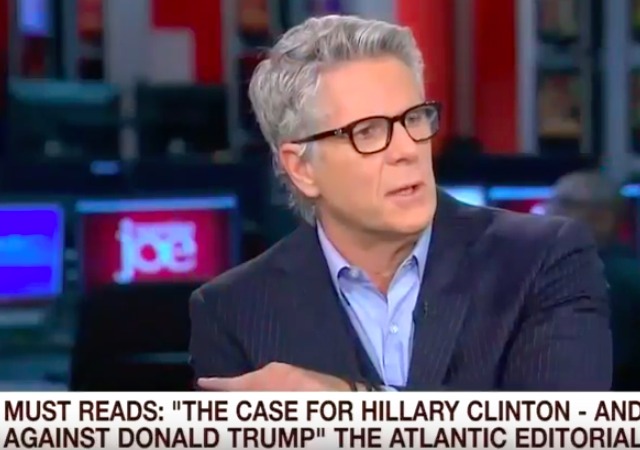 Right, Donny. Because who could ever come up with an argument against Hillary Clinton, possibly the most corrupt, scandal-ridden, jaded candidate in the history of presidential politics?

On today’s Morning Joe, Joe Scarborough, to his credit, fulminated against anti-Trump MSM reporters who are supposed to write stories down the middle but are instead “openly cheering for Hillary Clinton.” That’s when Donny Deutsch defended media bias, saying that reporters have a “conscience” and that “sometimes there’s no other side to an argument.”

Bonus coverage: earlier in the show, Deutsch said he would be “shocked” if between now and election day, the names of “three or four women” don’t emerge with stories damaging to Trump relating to “misogyny.” Was this pure speculation on Donny’s part, or did a little birdie inside the Clinton campaign tell him something? Note: because it is the primary focus of this blog item, the video clip and transcript place Deutsch’s defense of biased journalism first, although it actually came a bit later in the show.

JOE SCARBOROUGH: You now have a lot of people in the press openly—that are supposed to be down the middle—openly cheering for Hillary Clinton in a way that they want to be able to tell their children and grandchildren after it’s over, I did everything I could.

JOE: Conscience of journalists? They’re not supposed to have conscience —

DONNY: But sometimes there’s no other side to an argument. And I think that’s what’s happening here.

DONNY: The thing I still think will play against [Trump] is this woman stuff. I have a strange feeling at the debate, there’ll be another name that will come up from Hillary that we haven’t heard or haven’t thought about. I think between now and election day, and the one thing that Trump cannot recover — he recovers from sleaze, he doesn’t recover from the hate stuff. And there’ll be more women stuff to come. And he doesn’t recover from that. I would be shocked if between now and November 8th there are not three or four names of women we haven’t thought about or heard about that articulate the problem that Trump has, as far as misogyny and as far as all across other things.

MIKA BRZEZINSKI: I think that’s going to be a —

DONNY: I think that’s what going to continue to pound him.

The Answer: Donnie and the Bank.

The Question: Name two Deutschs that are Bankrupt.

Hire Gennifer Flowers to field questions from the media when the attacks start. See how long they last.

I too have no doubt that several women will come forward before the election and claim to have had an affair with Trump. I also have no doubt that their stories will be more full of holes than a hooker’s stockings, and that the press will ignore inconvenient facts like dates not matching up with his schedule in order to publish the fictional accounts on their front pages nationwide.

No doubt the Clinton Foundation has already written the checks. We’ll see what kind of quality actresses they’ve purchased soon.

He used to brag about it. He was wealthy and a chick magnet – according to him.

He had a public affair with his future 2nd wife while still married to his 1st. It isn’t a question of if there are bona fide examples. It is only a question as to whether the point has been made and other examples won’t matter.

My guess is that they have completely fresh material to roll out.

Julian Assuage claims to be loaded up, too.

Boy this is fun. I can’t take enough showers.

TheFineReport.com in reply to OnlyRightDissentAllowed. | October 6, 2016 at 3:16 pm

Unlike the Clintoons, Trump didn’t need to rape and destroy his women, they all seemed to go along willingly. I guess you can count that one in his favor.

You spelled his name wrong.Douche. FIFY

Great phrase! “more holes than a hookers stockings” I love it. Douche is the first moron to claim there is only one side to a story. They(the media) just do not want the other side heard because their arguments are so weak and easily overwhelmed with logic.

The female chauvinists have been exposed as anti-woman, man, and baby, too. Deutsch remains hopeful that JournoLists can spin a plausible narrative to return us to the twilight zone.

A person called me and said Donald Trump and Harry Reid were once lovers who never paid their taxes.

Trump’s way too old for Harry the Pederast.

There’s no other side to an argument is a bit different, albeit feeble. The older version, along the lines of the thinking man’s choice is clear, I never heard from anyone I’d consider a thinking man.

Of course there will.

The later they spring these stories, the less time available to reveal that they’re fabrications.

But good luck with pushing misogyny as the new magic word when the old standby, racism, doesn’t seem to be doing the job. For one thing, misogyny is so much harder to spell. For another, chasing after the Woman’s Vote® is like herding fish. They’ll vote the way they want, not the way the Dem sex-baiters want; women tend to be annoying that way. And a good thing, too.

Misogyny and racism aren’t relevant. That is good to know.

Trump is doing a better job of losing than Clinton is doing of winning. Clinton doesn’t need to make anything up. Just quote him.

TheFineReport.com in reply to OnlyRightDissentAllowed. | October 6, 2016 at 3:17 pm

Who cares what Donnie Dunce thinks.

“sometimes there’s no other side to an argument.”

Is it just me or does he sound just like one of the old Soviet apparatchiks?

He sounds like any of the fascist left infesting our country.

Two can play that game:
There is no other side to the argument that liberals are at best fools and usually evil.
And after 8 years of Obama and his fascistic acolytes, I am *not* joking.

Hey Donnie is just a flaming arse! The guy would not last one day out of New York city. But everyone knows that.

Rich guys tend to be babe magnets. trump has bragged about it.
but look at LBJ,
FDR
JFK
and the most egregous of all WJC – who also had a spouse whose primary job was to discredit the women WJC was raping.

I am no fan of Trump, but his exploits are basically amateur compared to his aforementioned competitors.

HRC is also no saint in this arena considering who many woman she has slept with.

National Enquirer’s OJ’s Alien Baby stories are nothing compared to what the leftist media cooks up.

I agree that the Clinton Campaign will “suddenly” find several women for this purpose, because of the email disclosure from Colin Powell that Bill is still -ahem- “dicking bimbos.”

So, the Clinton Campaign will bust a gut in an effort to create an appearance of equivalence on the part of Trump.

They are very predictable, and I disapprove.

I don’t like Trump but I am baffled at how his behavior as a private citizen is comparable to that of the former FLOTUS, Senator and Sec of State.

Sure Trump allegedly lost nearly a billion dollars of his own money. Yeah he’s an arse that has said mean things about woman. Yes he’s had at least one affair.

But. . . . .Sec Clinton’s State Dept couldn’t account for how many millions of public dollars? Sec of State Clinton lied about her use of a private server, the “protest” in Benghazi and supported the debacle in Syria and Libya.

I just don’t get the comparable.