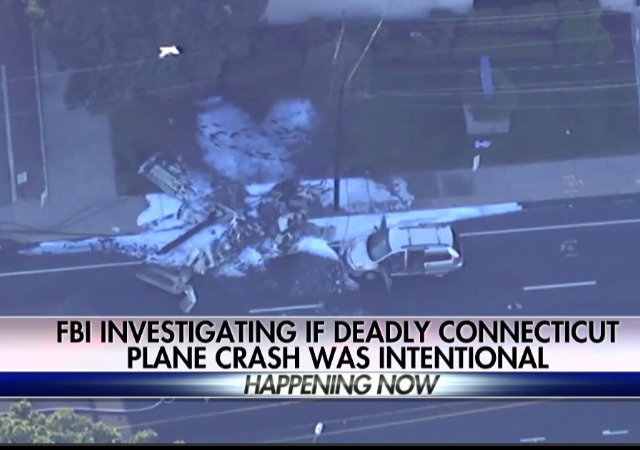 The National Transportation Safety Board (NTSB) has found that the small plane crash in Connecticut on Tuesday was intentional. From the Hartford Courant:

A student pilot and instructor were arguing shortly before a small plane they were in crashed near Pratt & Whitney Tuesday, killing one of them, a high-ranking local law enforcement official said Wednesday.

The source, speaking on the condition of anonymity, said the student pilot told the instructor he did not want to fly the plane any longer, although it is not clear why.

An initial search of an apartment where the student pilot, Feras M. Freitekh, was staying turned up no evidence of terrorism, the source said. But the FBI continued to search the apartment until about 2 p.m. Wednesday. Freitekh, 28, was killed.

If the FBI says there was no evidence of terrorism, then it probably was. The FAA Airman database lists a FERAS MAJDII MOHAMMAD FREITEKH of ORLAND HILLS IL. So now we know that the middle initial “M” stood for. Mohammad wasn’t a student pilot, he had his private pilot certificate and an instrument rating. Perhaps he was going for his multi-engine rating (the Seneca is a twin-engine aircraft), a prerequisite to fly jets?

Feras MOHAMMAD Freitek did not want to fly the plane? So why wouldn’t the instructor just land it? Obviously something rather sinister happened here because even if the student tried to crash it, there would have been a battle for control of the aircraft with the instructor.

But just call him “Mo”