It’s possible, if not probable 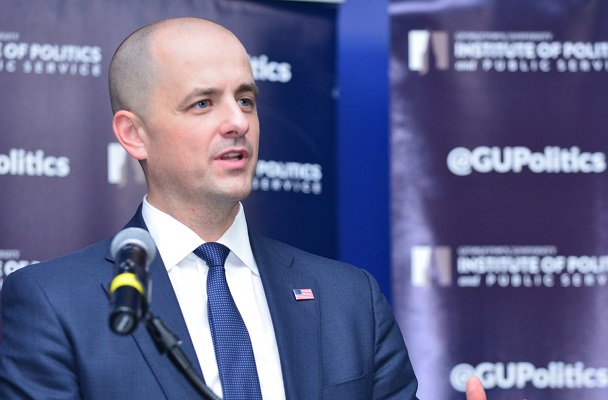 Evan McMullin has been making a handful of headlines since first launching his Independent campaign, including his inclusion on a number of state ballots or as a write-in; however, with recent polls showing him in a dead heat with Trump and Hillary in Utah, speculation about his campaign has grown.

FiveThirtyEight is speculating that McMullin could, in a long-shot scenario, win not only Utah but the White House.

It would take a fascinating scenario — in which much of the technical detail of how we select presidents comes into play — for McMullin to be sworn in as the 45th president, but the chances of its happening are slim, not none. Indeed, his chances of at least making things very interesting may be as high as 1 to 3 percent — about the same as the odds of the Cubs’ coming back to beat the Giants on Monday.

. . . .  The idea that an independent candidate could swoop in to win has been largely dismissed, on the grounds that any conservative-leaning third-party candidate would be more likely to hurt Trump than Clinton, thus making a Clinton victory more likely. But McMullin may have one advantage that other second-tier candidates do not: Utah.

His path to the presidency basically looks like this:

However, it’s also likely, and seems more probable, that McMullin could instead assure victory for Hillary.

The upshot, however, is a bit bizarre. If you’re pro-McMullin or anti-Trump enough that this scenario excites you, congrats. But unless you’re in Utah or other states come into play, there’s not much you can do about it. If McMullin cuts into the Trump vote enough to give Clinton plurality wins in potential red states, her victory is assured.

In other words, if McMullin gets too strong, he could literally cost himself the election. The only route to the presidency McMullin can take must be navigated on the back of a dark horse.

however, with recent polls showing him in a dead heat with Trump and Hillary in Utah

Some people will believe just about anything.

both statements are correct.

Possible though highly unlikely.
When I will vote for McMullin, I will vote for a placeholder for a conservative in 2020. Not a wasted vote.
If that’s nor enough, McMullin gives voters a reason to go to the polls and support the downballot candidates.

Your “conscience” vote will result in a progressive supermajority on the supreme court. Your 2020 “conservative” will never be elected.

This stunt from the #NeverTrump wing with McMullin drastically raises the probability of a Hillary Presidency. It also gives you an idea of the total number of available GOPe voters and votes for the 2018 election.
If you have not read this yet, it will enlighten some of you. Instapundit linked this: http://www.cracked.com/blog/6-reasons-trumps-rise-that-no-one-talks-about/